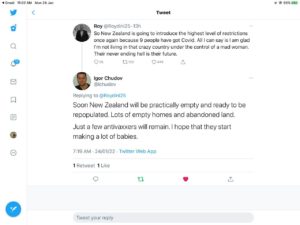 New Zealand’s “unvaccinated” are again being punished with more confusing rules and regulations as the globalists plunge NZ into the red light of the Traffic Light System.

After “omicron outbreak” detected, the jabbed continue to enjoy more privileges than the unjabbed.

We are joined by Liz Lambert, Employment Specialist and former lawyer, who encourages employees to down tools with Section 83 of the Health & Safety at Work Act.

Following that, Carlene Hereora updates us on the shenanigans going on up at Waitangi, where the Prime Minister and the Governor General were part of fake Waitangi Day celebration pre-record.

Following the news that the PM & GG were spotted up at Waitangi on Friday & Saturday, we will release an interview with Carlene Hereora shortly.

With last year’s unprecedented cancelation of Waitangi and the recent orange status of Northland, why was there a pre-recording of the Waitangi ceremony?

Locals noted organisations & iwi present but curiously some kaumatua were not.

Partners in crime MSM were there for the “Special” due to air on Waitangi Day.

Why no celebration on the actual day?

We are well aware of the optics in the U.S with the Biden inauguration argued as being pre-recored.

Optics in the media here & globally has dominated us for 2 years during the scamdemic.

Can Kiwis expect a trend of fake appearances by our leaders?

Was it all because they knew red light was planned & imminent?

“Watch this space. The power is with the people. I’ve got great faith in Kiwis..”

Bruce Smith is the Mayor of Westland. He takes his role – as a public servant, to serve the people he represents – very seriously. He regards it as crucial that he listen to, and respect, the views of those who voted him into office. His phone line is always open to Kiwis who reach out to him.

Here, he discusses his concerns about a number of current government policies, including:

Three Waters:
https://threewaters.govt.nz/
He Puapua:
https://www.democracyaction.org.nz/he..
.
local government reform,the lack of independence in mainstream media in NZ
Westland’s choices around mandates, which emphasize our shared Kiwi humanity rather than exclusion of people

Perhaps what most stands out in this conversation, is the ethical and grounded way in which Bruce approaches local government issues.

His form of deeply caring leadership is desperately needed in New Zealand at this time.

After living in two different countries over the past two years, traveling half way around the world and seeing how everything that has happened via the pandemic along with the roll out of A.I I figured something was a miss all though not being 100% sure about my theory I finally got confirmation of everything Id figured??
I finally got confirmation via a Video Interview of Dr Jordan Peterson that my suspicions where correct regarding the Global Lock Downs being done via A.I Analytics.
Here is the link to which Jordan Peterson admits what was behind the Global Lock Downs,
I’d like to know just how long he’s known about this information??