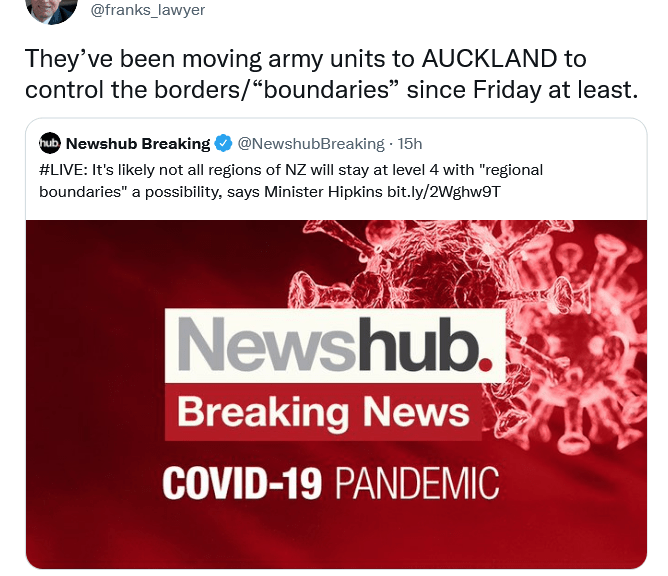 HERE is my photographic essay of the lockdown where I live. NZ: 100 CONFIRMED DEATHS, 2 PER DAY ON AVERAGE … 100S INJURIES, HEART ATTACK, STROKE, CLOTS … IMPORTANT INFO ON WHAT YOU CAN DO (CITIZENS REGISTER)

“An important message…NZDSOS want to spread the word now amongst those who seem very good at opposing government narrative that we have yesterday sent a list to the government – Jacinda Ardern, Chris Hipkins, Ashley Bloomfield, Medsafe MCNZ – of the 100 confirmed post jab deaths we have collated to date so they can no longer ignore what they are lying about. We have many more deaths still to write up with 2 per day coming in on average. plus hundreds of injuries eg strokes, heart attacks, clots etc.

Full time position, on a Fixed Term or Secondment basis

Must be immediately available for a period of 8 weeks

Ko wai mātou | About us

The Department of the Prime Minister and Cabinet’s (DPMC’s) purpose is to advance an ambitious, resilient and well-governed New Zealand.The COVID-19 Group, within the DPMC, is guided by a mission to mobilise the collective capacity of government to eliminate COVID-19 while sustaining New Zealand’s economy and social cohesion.

The COVID-19 Group is responsible for integration of strategy and policy, system readiness and planning, insights and reporting, system risk and assurance, and public engagement and communications.

We are seeking to appoint at pace a fixed termSenior Analystwhose role will be to actively monitor open source social media channels, to triage across these channels and to case-manage issues. You will work as part of a small team in DPMC and connect in with a larger cross-government networks, working to respond to, and build resilience to, disinformation in New Zealand. You will be working in a fast-paced dynamic environment and have the opportunity to shape future capability development.

Ko wai koe | About you

We select on capability and welcome a wide range of applications where the candidate can demonstrate the following:

We pride ourselves on the quality of our staff and understand the importance of fostering a working environment where excellence is recognised and where staff are encouraged to develop their own talents and potential. We welcome diversity, in all its forms, in fact we believe it is a strength.

All DPMC roles are flexible by default and a positive work life balance is encouraged.

Me pehea te tono |How to apply

If you would like to be considered for this role, please apply online.

Apply online for this role or contact Department of the Prime Minister and Cabinet NZ for more information. 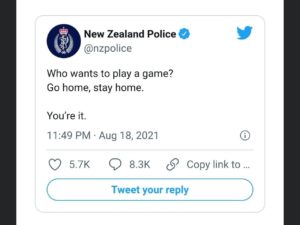 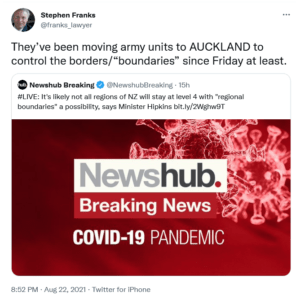 This is becoming the new norm on social media.
This first appeared after the Christchurch mosque shooting in 2019, which marked the point when New Zealand became a fascist state

The Medical Council is looking “very seriously” at a text message sent by a local Wellington doctor to his patients, informing them he doesn’t support Covid-19 vaccinations.

Walker said the council was taking immediate steps, including communicating with the doctor on Friday.

“Our primary focus is public safety. The council’s view is that there is no place for anti-vaccination messages in professional practice, nor any promotion of anti-vaccination claims including on social media and advertising by health practitioners,” Walker said. 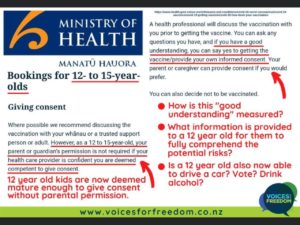 A law lecturer has come out against the arrest of anti-lockdown protesters in Auckland yesterday, calling it the death of democracyAn AUT law lecturer has come under fire for posting a video in which she calls the arrests of Billy Te Kahika Jr and Vinny Eastwood a sign of the “death of democracy”.Amy Benjamin, a lecturer of international law, went public with her take on the outcome of Thursday’s protest last night on YouTube.She called the decision to go into a snap lockdown an “insane policy that probably amounts to a crime against humanity”.In the video, she voiced outrage that Te Kahika Jr was arrested for peacefully protesting – which runs counter to police’s statement the arrest was made for the breach of the health order.

She also made the demonstrably false claim that Covid-19 can be treated with ivermectin.

Benjamin made a maskless appearance at the protest in downtown Auckland yesterday, which led to four arrests.

Her distaste for masking up was flagged by students in one of her classes this week.

A source from AUT reported that she asked a student to remove his face mask in a lecture earlier this week, despite the university’s policy allowing students to wear masks and socially distance in class.

In response, Benjamin said she didn’t ask a student to remove a face mask. “I told him he should feel free to do so, not that he should do so or must do so. And he seemed to react with relief when I said this and promptly took off his mask, with a smile.” It’s not the first time Benjamin has taken flack for courting controversy.

In 2017, an article of hers was published by the African Journal of International and Comparative Law questioning whether 9/11 was a “false flag attack”, saying the evidence strongly suggests the attacks “were either perpetrated by elements of the US Government or allowed by them to happen”.

Although Benjamin was present at the protest, her inability to pronounce Te Kahika Jr’s name suggests she is not a dedicated follower of his.

Nevertheless, many of the claims she made in her video echoed his, such as calling Covid-19 an easily treatable disease that poses little risk to the healthy population.

Meanwhile, back in Benjamin’s native United States, Covid-related deaths have skyrocketed over the last month, now averaging 769 per day.

This is according to the Reuters tally – mainstream media Benjamin said has “parroted [the Covid narrative] incessantly”.

“Now this, ladies and gentlemen,” Benjamin said about Te Kahika’s arrest, “should make all of you sit up and take notice … Certainly you must see the problem with criminalising and forbidding peaceful protest and demonstration against such a policy.”

It should be noted that the arrest of Te Kahika Jr was for breaching the health order and gathering in public under Level 4 restrictions, rather than for the act of protesting itself.

She said public gathering is critical for protest.

“The Government could have created an exemption from the health-order edict for core political-speech rights, but chose not to,” she said. “So here we are.”

The video was Benjamin’s ‘maiden broadcast’ on her YouTube channel, which is called American Spirit.

A former student of Benjamin’s said she was an upbeat and slightly eccentric tutor in her first year Public Law paper.

“She was deeply enthusiastic about us using correct grammar in our assignments,” she said. “And presenting our opinions loudly and proudly.”

THE DEATH OF DEMOCRACY NZ STYLE

The Covid-19 delta variant has forced Australia and New Zealand to review their strategies of eliminating infections of the virus, and prompted Australian Prime Minister Scott Morrison to say it’s highly unlikely his country will ever return to zero cases.

“With a virus that can be infectious within 24 hours of someone getting it, that does change the game a bit,” Hipkins said. “With our Level Four lockdown, we are very well placed to be able to run it to ground, but we have to be prepared for the fact that we can’t do that every time there is one of these.”….

Hipkins said the system had worked well pre-delta, but it was now looking “less adequate and less robust.”

This is the law, not what the cops are telling people 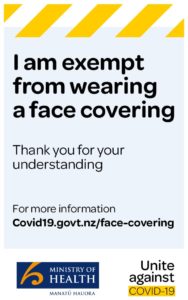 No mask, no food

Napolean Busch visited by The Police.