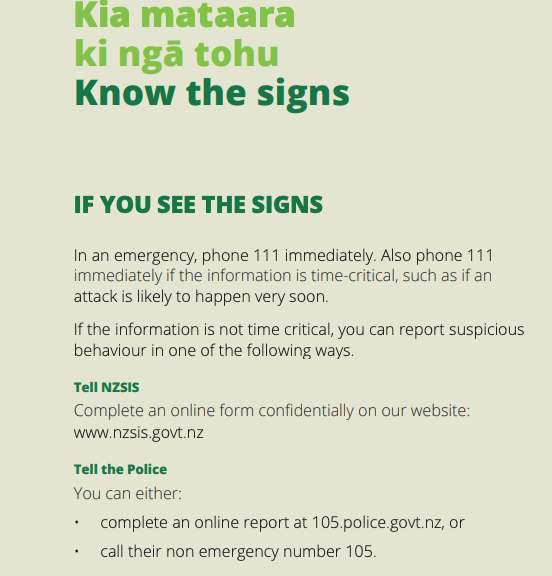 People may laugh (and the messsage is so proposterous it is hard not to.

However, although the message is delivered in a kiwi accent, which makes it all a bit naive but well-meaning this is straight out of the copybook of the KGB or Gestapo.

They may not (yet), be knocking at doors but the methods are those of any tyranny or totalitarian regime –

“if you see something, say something” 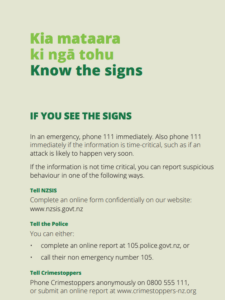 For those that don’t know, the NZSIS (Security Intelligence Service) are the country’s spooks who spy on you and I while the GCSB (Government Communications Security Bureau) are those that spy on behalf of the Five Eyes.

A guide from NZ’s security services details dozens of indicators that a friend or family member could be planning a terror attack.

Our secret service is launching an initiative to help us identify people who may have been radicalised.

The guide, titled ‘Kia mataara ki ngā tohu – Know the signs, a guide for identifying signs of violent extremism’, details dozens of indicators that a friend or family member could be planning a terror attack.

The move comes as our spy chiefs identify a new and worrying type of terrorism.

Time was when the intelligence services were never seen, never heard. But now they’re loudly proclaiming your country needs you – to keep an eye on those you know, and if necessary dob them in.

“Recognising a potential warning sign and then alerting New Zealand SIS or police could be the vital piece in the puzzle that ultimately saves lives,” NZSIS Director-General Rebecca Kitteridge said.

To that end it has published a guide to help us all identify potential terrorists in our midst.

“To pay attention and to be alert so that if they see or hear about something that seems off, that worries them and concerns them, they might have a look at this information to say does this indicate to me that this person is actually on the road to committing an attack,” Kitteridge said.

The SIS has listed around 50 signs – from obvious ones like writing on a weapon as happened in Christchurch to a person developing an ‘us versus them’ worldview.

Authorities say they are usually closely monitoring 40 to 50 potential terrorists. These people used to be motivated by their white identity or by their faith but in the past six months a third group has emerged, those motivated by politics.

“So it could be the COVID measures that the Government took, or it could be other policies that are interpreted as infringing on rights and it’s a kind of what I describe as a hot mess of ideologies and beliefs fuelled by conspiracy theories,” Kitteridge said.

Prime Minister Jacinda Ardern has weighed in on this.

“It would be wrong to imply that we have this significant surge in threat in that regard – are there individuals who subscribe to a particular ideology that may border and dip into violent extremism? Yes,” she said.

Our two most recent terror attacks were perpetrated by security-conscious lone violent extremists – hard to identify by their online activity alone. The launch of the initiative is an indicator that security services know that they can’t do it without the help of the public.

But to some the guidelines are a first step only.

“How do we upskill those people in our community who are much closer to people who might be potentially radicalised and get them to understand what it is they’re seeing, that’s our challenge,” Massey University sociologist Professor Paul Spoonley said. 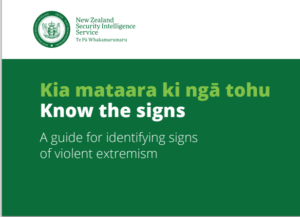 See the SIS release HERE and their publication, Know the signs, a guide for identifying signs of violent extremism  HERE

From the New Documentary ‘Web of Chaos’: Kate Hannah, Director of the Disinformation Project

“They use Pinterest and Instagram to draw in other women who are interested in interior design, childrens’ clothing, knitting, healthy food for children, and it does draw people in towards a set of white nationalist ideas.

I mean it’s relatively easy to see, if you see a very beautiful, fair-skinned blonde or red haired child with beautiful braiding in her hair and some flowers, just step back a little bit (laughs) which is really distressing, because that’s my heritage”

Sean Plunket of the Platform may be a bully and not a journalist in the true sense but he is asking the right questions. One can’t always choose one’s allies

COVID-1984: Woman Protesting Against A Freedom Protest In New Zealand, Holds Up ‘Masks Are Freedom’ Sign

When you know the propaganda is really working on some people.

And yes, I know it looks like it says ‘Mask (singular) Are Freedom’, but if you look closely, there’s a very faint ‘S’ there.

This woman was part of Mark Graham’s #FARC protest, against the Auckland Freedom & Rights Coalition freedom protest on Aug 6, 2022. 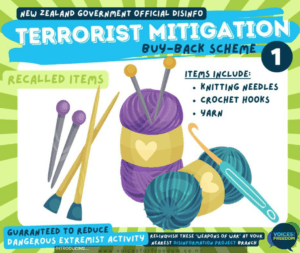 Our all-caring leaders have devised a genius set of ways to make Kiwis ‘safer’ and protect them from this new, emerging domestic threat…

Individuals at risk of ‘radicalisation’ now have the opportunity to come clean and surrender their ‘weapons of war.’

And if that fails, there’s always the 0800 nark line to dob in your neighbour… ☎️

The first, and arguably most dangerous, items for surrender are knitting and yarn craft paraphernalia. 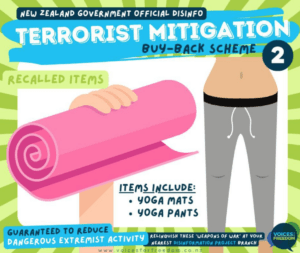 Don’t ever let stretchy pants and a rubber mat blindside you from the truth – people wearing and weilding such dangerous items are a true threat to our democracy!! 🧘🏾‍♀️🧘‍♂️

There is still time to acknowledge the error of your ways… ⏱️⏳️

Relinquish these items of extremism today and make NZ a safer place! 🇳🇿

Tyranny does not appear overnight but gradually and with the consent of the ruled.

To borrow a phrase: