All of New Zealand will remain at alert level 4 until at least Tuesday midnight, Prime Minister Jacinda Ardern has confirmed.

Cabinet will meet on Monday to decide on the next move on the country’s alert levels.

Ardern and Director-General of Health Dr Ashley Bloomfield have provided an update on the country’s alert level situation.

New Zealand went into lockdown at 11.59pm on Tuesday. Auckland and Coromandel were initially set to be in level 4 for seven days, while the rest of the country was put into level 4 for three days.

There have now been 31 community cases of Covid-19 officially confirmed in Auckland and Wellington, with 11 new cases announced this afternoon.

Ardern said the delay in opening until Tuesday means there will be more time to assess how much of the country has been affected.

“We believe we’ll be in a better position to make an assessment about all of New Zealand with that full seven days, granted Auckland is looking like it will have the challenge of being the primary site of this outbreak.”

Ardern said the country was in a “reasonable position”, but it was still early days in the outbreak and it was too soon to draw any conclusions.

“We are still waiting on a large number of contacts to be tested,” she said.

“We just don’t quite know the full scale of this Delta outbreak. All in all this tells us we need to continue to be cautious.”

Ardern said it was important that the cases at this point appeared to be linked and there were not cases popping up where they were not expected.

The large number of locations also meant the country was likely dealing with more cases, and with cases confirmed in Wellington today, health authorities were now dealing with an outbreak that was not isolated to Auckland.

“It’s much better to assure ourselves now …. than allowing the virus to spread easily.”

She urged people to check locations of interest and if they have been there at the time they should get a test. However, she warned that if they were there earlier or later, a test was not necessary.

“Many people have been doing the right thing and have encountered long wait times at our testing stations. Please do remember you can also call your GP to see if they are testing.”

She said contacts should stay home and isolate. Others should, under level 4, stay home with their bubble.

She reminded New Zealanders that anyone over 12 visiting an essential service was required to wear a face mask.

“We are also asking people to just wear a mask as they leave their home generally. Remember people have got the virus just by walking past someone.”

People should be washing their hands, scanning in, and “please be kind” and check in with friends and family.

“Following the rules to the letter does mean we can reconnect faster.”

She said the lockdown method was tried and true.

“Keep up the amazing work and everyone – and I mean everyone – needs to play their part.”

Dr Bloomfield said the testing rates across the country have been six to 10 times the usual level, and “we need to keep that up”.

He said the 24,000 swabs in one day in Auckland is 50 percent higher than the previous single-day record.

Yesterday health authorities managed to link the current cases of the Delta variant in this country to a traveller who arrived from New South Wales and was taken to Middlemore Hospital earlier this week.

Vaccination clinics have resumed operating after a one day pause to get alert level 4 protocols in place, but one Auckland clinic said it was now doing half the number of vaccinations that it was prior to the lockdown.

Close to 400,000 people have booked their Covid-19 vaccinations in the past two days, Prime Minister Jacinda Ardern says.

Thirty-thousand doses were administered yesterday, and that number is expected to grow.

Ardern reminded people that anyone over 40 could book a vaccine for themselves and their children aged over 12.

“One of the key parts of my advice to the government to bring 12-15 year olds on was because of the younger age structure of our Māori and Pasifika populations. So it will have a proportionately greater impact on that population.”

The conspiracy theorists charged in yesterday’s anti-lockdown protest outside TVNZ headquarters have appeared in an Auckland court and been banned from the internet.

Not guilty pleas were entered on his behalf at Auckland District Court and he will next appear in court on October 13.

Police also charged Te Kahika, 49, with failing to assist a constable exercising search powers under the Search and Surveillance Act.

The Covid-19 alert level breaches carried a maximum penalty of six months’ jail or a $4000 fine.

The charge of failing to assist under the Search and Surveillance Act has a maximum penalty of three months’ imprisonment.

Te Kahika’s bail conditions are to live at a Hokianga address, which he can only leave for attending his next court appearance, or for pre-arranged meetings with his lawyer.

He is not to access the internet or possess any internet-capable device.

One of those two is protester Vincent Christopher John Eastwood, known as Vinny, who was also arrested outside TVNZ.

Eastwood, 36, appeared before the judge by videolink.

The Green Bay man faced three charges of the same types Te Kahika was charged with.

He was remanded on bail without plea to September 10.

He can only leave his West Auckland bail address for court matters, and must comply with Covid-19 restrictions as part of his bail conditions.

Eastwood was banned from contacting Te Kahika and the other alleged associate.

He was also banned from possessing any internet-capable device, banned from accessing the internet, and banned from entering Auckland CBD.

He can only visit downtown Auckland now for legal appointments.

The Bail Act prohibits publication of many other details from today’s hearings.

People needing emergency care are being diverted from Auckland’s North Shore hospital and Short Stay Surgical Unit after a patient tested positive with COVID-19. The patient was being treated prior to their COVID-19 diagnosis however the DHB is assuming that the individual could have been infectious during admission. 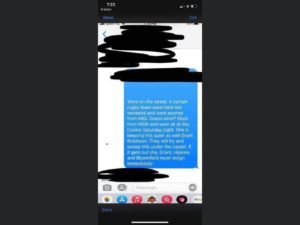 I am pretty pissed with the New Zealand scene right now when it comes to a movement of resistance.

Unlike overseas, no demonstration can ever get more than a small handful of people. This is because there is so much sectarianism (“my movement is better than your movement”) and so little sharing of information.

People are totally wedded to Facebook and it is very hard to find information.

For instance I learned very important information that there have been 100 deaths in New Zealand from the vaccine ( 2 per day).

You would think that this is so important that it should be made available. I try to share information as widely as I can but it seems others want to hold onto it.

Inquiries from the person who shared this elicited the vaguest of response. Finally, through the efforts of my partner Pam, we found that this is from a doctor’s site that costs good money to join.

Then, some weeks ago I was excited to learn that the NZ Health Forum Facebook group had interviewed someone about their vaccine injury.  I have been waiting, waiting… and waiting and finally, by accident I found a link to the interview that took me to THIS address.

When I went to bookmark the site where it came from I got this message:

Awesome Site in The Making

An amazing site is coming to this web address. Check back soon!

I make considerable sacrifices amidst declining health and energy to get information out. I hold onto nothing and it is done for free without any expectation of monetary or any other reward. For every hour I spend at the computer I need to spend several resting.

This combination of malevolence among the few and the fine motivations but seeming ineptitude makes me want to give up.

I certainly feel relieved that I don’t belong to any groups!

I have to resign myself to the seeming fact that this agenda will go through with the greatest ease with the minimum of pushback. As I have pointed out I live in a country with a naive, unthinking population with ZERO understanding of living under totalitarianism.

Mary speaks about her adverse reaction to the Pfizer Vaccine

Listen to the audio HERE

I suggest you use THIS INVITATION to join Telegram. You will need a cellphone (just once) to join.

One thought on “New Zealand’s lockdown has been extended”