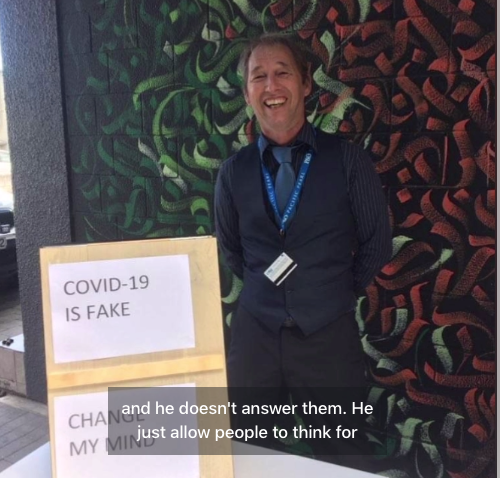 Being from a different generation that grew up in New Zealand and took political liberties for granted despite researching full-time I still have difficulty accepting that this is happening so I can forgive a certain amount of cognitive dissonance.

Sure, there have been bad things happen in this country but they have been blips in what  has otherwise been a liberal democracy.

I have never encountered anything like this in my whole life.

My understanding is that if someone is arrested for a crime there are clear charges and a bail hearing is heard within a week. Instead, what I see here is that Graham Philip, who seems to me, despite some eccentric and loud individual protests has been kept in jail for 7 months without clear charges and without bail, and there has been absolute silence from the media.

When has this ever happened before? This has resonances with the case of Simeon Boikov (Aussie Cossack) who was arrested on a minor charge (revealing the name of an arrested pedophile), kept in isolation from his family and fellow inmates before being charged.

In my mind this is worse because Graham is not an important person and can easily be airbrushed from existence.

It seems that no one in the resistance movement knows (or perhaps, cares?) about this.

So, kudos to Counterspin media for shining light on the darkness.

It is as if he disappeared from the face of the earth and no one from his family and friends know about it.

This is absolutely alarming and unprecedented in New Zealand history.

Maybe, I have got the wrong end of the stick – but I don’t think so.

A POLITICAL PRISONER IN NZ: GRAHAM PHILIP IN REMAND SINCE DECEMBER 8, 2021.

This is the heartbreaking story of Marta Philip, whose husband Graham (GJ Philip  journalist, radio host & author) has been imprisoned without trial for almost 7 months now.

Graham has suffered greatly at the hands of our justice system, and has been held in conditions that constitute major breaches of human rights.  During his imprisonment, Graham has spent extensive time in high security, sharing cells with murderers, drug dealers & hardened criminals, and has had several attempts on his life.  He was also held in solitary confinement, without stepping foot outside for 18 days.

Furthermore, due to ‘covid restrictions & mandates’, Graham hasn’t been allowed to receive a single visitor throughout his time in prison. Graham & Marta haven’t seen one another since Graham was taken away on the morning of his arrest (8 December, 2021).  Grahams applications for zoom calls are being denied, and communication with his wife has been limited to letters (which take weeks to arrive, if at all), and a 5 minute phone call per week.

To date, the charges against Graham remain very unclear & Marta tells us she is still in the dark about many aspects surrounding his arrest.  We know that Graham was VERY vocal in terms of speaking out against Government overreach; tyranny & the ‘covid narrative’ from day one. Graham had his own radio show on ‘Free Speech NZ’, and ran various channels on social media platforms where he shared his research – the truth about the UN globalist agenda & the experimental poison etc.

This begs an important question:  Has Graham been imprisoned for his political views, making him a target and subsequently – a political prisoner of New Zealand???

Graham is a good man with no prior criminal history.  He does not deserve to be sitting in a cell for months on end without being given the opportunity of a fair trial!!

Please help us raise awareness in order to help free Graham from this cruel & (what seems to be?) ‘unlawful’ imprisonment by sharing their story.   We believe that everybody needs to hear this!

Many thanks Kelvyn & Hannah at Counterspin Media – you guys rock!!

This is from a month or so ago 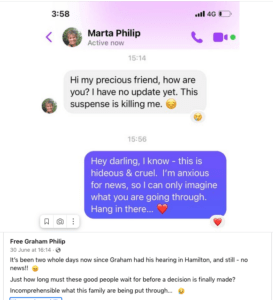 From this week, seven months after he was arrested

Despite the cancelation of the bail hearing today, a number of people turned up in support regardless.

Graham faces seven counts of sabotage and is represented by Frontline Law.

It is worthy to note that the charge of sabotage, to anyone’s knowledge, has not been leveled at anyone under the current Crimes Act 1961. There seems to be reference to such charges in the 1940’s, but under the old Crimes Act.

Today Graham Philip was left in limbo again after the judge reserved his decision whether to grant bail or not.

The decision will be released via the registrar when the judge confirms either way.

Our correspondent, Dana Lee caught up with his wife, Marta Philip, this morning after the hearing.

Unfortunately due to a supression order we are limited on what we can make public.

Graham has been held for almost 7 months & has been denied bail twice, facing allegations of sabotage.

Graham Philip has again been denied bail but options moving forward are being considered, including taking an appeal to the court of appeal.