Lies upon lies.
This is highlighted from the following comment.
First, we were protected against a largely mythological covid and they lied about that to “vaccinate” the population and now we are looking to a major catastrophe because of the destruction of immunity in the vaxxed they are STILL lying with every breath.
Anon, via Facebook
Copied from another and a few days late , but after the lifting of some of the mandates and v passes it goes some way to explain why not all of us are jumping for joy, yet. After feeling like somewhat of a leper and a second class citizen for the last 6 months or so , the wounds run pretty deep. Life/Relationships changed and some will never be repaired .
Today our society shifted. The unvaxxed are suddenly no longer a threat to the rest of the country. They are now invited to rejoin society and go back to “normal”.
The problem is, none of this is normal. We can rejoin social clubs and gyms instead of training alone in our homes. We can head back to restaurants and eat on their tables instead of sitting in our cars. We can stay in a hotel again and go and get that much needed beauty treatment.
But this isn’t normal. Because restaurants, cafes, beauticians and gyms are the least of what was taken from the unvaccinated on December 3rd last year.
Families have disputed so heavily over these mandates that there are relationships have been destroyed. People have been separated from newborn babies in their families because they were a threat – and in an instant they are suddenly safe? People lost, not only jobs that they loved, but careers they had invested into for many years. People who had connections in social sports and teams or who gathered around common hobbies were forced out of friendship groups; banned from being part of the things that brought them joy in life.
It is not like a lockdown. It is nothing like the other covid restrictions we have faced. Why? Because it’s not that those things have been cancelled… they still go ahead, you are just not invited anymore.
That rejection doesn’t dissolve with a decision from cabinet. That grief doesn’t dissipate with a coffee in a glass mug or a hot restaurant meal that isn’t in a paper bag.
I don’t even want to get into the politics of the capital “C” church throughout these mandates. Not yet.
But today – the day we were made acceptable again – it has to be said that it’s ok if you feel conflicted. It’s ok if your world doesn’t spring back to “normal” after today’s 11am announcement.
We need to be people who are forgiving, we need to release the things that have hurt us.
– and I am not encouraging anyone to hold a grudge or stay in bitterness.
But I do want to acknowledge those who suffered great loss due to a mandate that is now removed.
The mandate and the vax pass might be gone, but the loss isn’t.
And it’s ok to grieve that.

At 11:59pm on Friday, the Government’s recently-announced changes to the traffic light system came into effect. Prime Minister Jacinda Ardern earlier this week said this “simplified” framework was aimed at targeting restrictions “at those activities that reduce transmission the most”.

‘A new beginning’: Ardern confirms end of vaccine passes, unvaxxed teachers can return with mandate shakeup means ditching outdoor gathering limits and not requiring masks to be worn at outside events. If by chance there is nice weather this weekend, that means outdoor sporting events and concerts are back on.

Indoors there are still restrictions, such as the need to be seated and separated at hospitality venues, but gathering limits have jumped from 100 to 200. That’s in acknowledgement of the fact that transmission has been “relatively low” at hospitality sites but there is still some risk.

Ardern said on Wednesday that the increase won’t have any “material impact” on the health system or hospitalisations. That echoes comments from Health Minister Andrew Little this week when he said modelling showed lifting restrictions wouldn’t lead to an increase in people being hospitalised.

Importantly, vaccine passes still need to be used at these events. They aren’t being scrapped until 11:59pm on April 4. If an event doesn’t want to use the passes then gathering limits don’t change.

You won’t need to scan in or write down your contact details if you enter a shop or go to a gathering. The Government has removed those requirements and businesses no longer need to display QR codes or provide a means of record-keeping.

When New Zealand eventually moves to the orange level – the traffic lights will be reviewed on April 4 – all gathering limits will be removed. Masks will still be required indoors.

Ardern said the Government was able to loosen the rules due to high vaccination rates and because case numbers are expected to begin declining in the coming weeks. By April 4, New Zealand should be on the other side of the Omicron peak, she said.

“The evidence shows we are coming off the Omicron peak with cases in Auckland having already declined significantly, and a decline expected nationally by early April,” Ardern said.

“To date we’ve had more than 500,000 reported cases of COVID-19 and expert modellers say there have probably been 1.7 million actual infections. That figure, coupled with 95 percent of New Zealanders being fully vaccinated, means we now have a high level of collective immunity.” 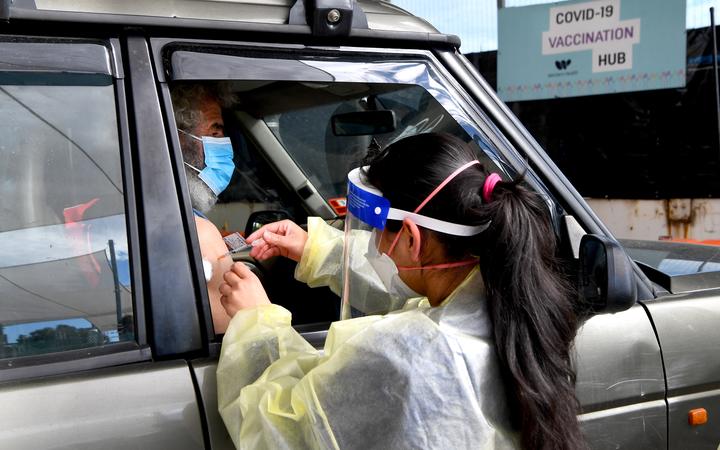 A resident receives a dose of the Pfizer Covid-19 vaccine in a drive-through vaccination centre in Melbourne, Australia on 10 August, 2021. Photo: AFP / William West

The decision comes amid a steady rise in cases fuelled by the highly contagious BA.2 sub-variant of the Omicron strain and concerns of co-circulation of Covid-19 and flu viruses during colder months as most social distancing restrictions end.

A second booster shot will be offered from 4 April to people who had their previous booster shot at least four months ago and are over 65 years, Indigenous Australians over 50, people with disability or severely immunocompromised, Health Minister Greg Hunt said during a media briefing.

Australia, which is among the most heavily vaccinated countries against the new coronavirus, has so far administered two vaccine doses to 95 percent of people above 16. Nearly 67 percent have been given a third, or booster shot, official data showed.

This has helped Australia to restrict its Covid-19 numbers, with about 4 million cases and 5824 deaths registered since the pandemic began, far lower than many comparable countries.

A total of about 35,000 new cases and 16 deaths were reported by late morning on Friday, with four states due to report later.