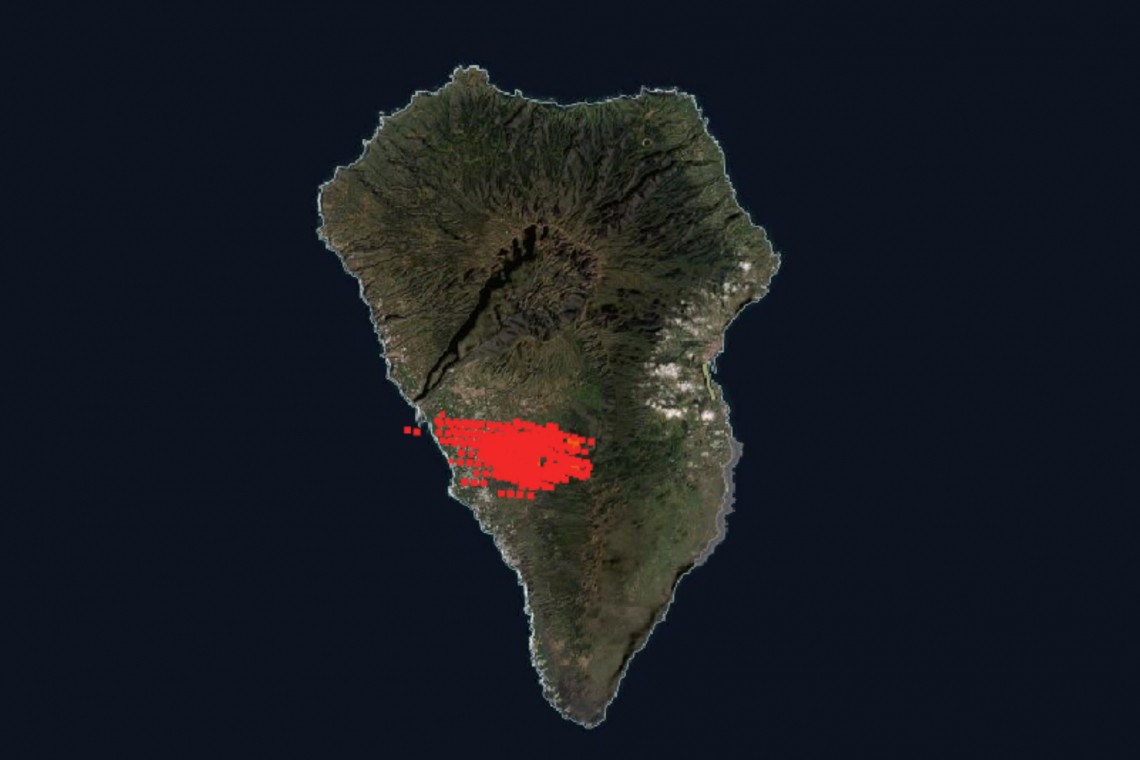 Thousands of people are now fleeing the Island of LaPalma as the volcanic eruption there continues to grow worse.  New heat sources appeared in the ocean off the island’s coast, and this expansion of the eruption is sending thousands to piers, trying to flee the island.

Island authorities are to install heat sensors to try to determine how vast the lava expulsion is, that’s taking place underwater.

The troubling aspect to this is clear: If the volcano is erupting a mile from shore up on the hill, and is now also erupting out in the ocean, then the entire area between those two points is clearly subject to the eruption, and that could cause the island to literally SPLIT APART.

Residents and tourists on LaPalma have been slowly and steadily leaving the island for days, via the airport.  But the airport had to close this week because smoke, volcanic ash, and sulfur dioxide vapor has made flying dangerous.

Once the airport had to shut down, people starting heading to the piers to leave by boat, but the flow was manageable . . . until today.

When the heat blooms registered in the ocean, it caused a very big uptick in people trying to leave.  Here is what the departure pier looks like today: 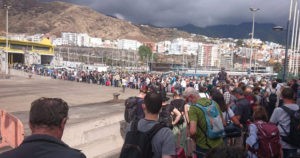 Better late than never, but things are only getting worse on the tiny island.

As shown above in the Municipality of El Paso, the only option for those who have seen their flights canceled and others who now want to leave, is to get on one of the boats that leave the port.

The surge of passengers has led the two shipping companies that operate with La Palma to increase the number of ships that cover the route between Santa Cruz de La Palma and the Los Cristianos dock, in the south of Tenerife.

Will the eruption cause the island to split in half? No one knows.  These people are not staying to find out.

The evacuations of 160 people from three neighbourhoods in La Palma this Friday was decided due to the risk of a partial or total collapse of the volcanic cone. According to the committee spokesperson for the Canary Islands Volcanic Emergency Plan (Pevolca) and director of the National Geographic Institute (IGN) in the Canary Islands, María José Blanco, this would generate high-speed flows that could expand laterally, reaching areas that were not previously thgouht to be in danger. Faced with this potential situation, the Pevolca scientific committee decided to evacuate the areas that were estimated could be affected: Tacande de Arriba, Tacande de Abajo and Tajuya

Most have gone to stay in the homes of family and friends, at least twelve have been transferred to a hotel in Fuencaliente and evacuations of ten people with functional diversity to the El Fuerte barracks (Breña Baja).

At around 1:00 p.m. on Friday, an increase in seismic signals was registered at levels that had not been reached even on the night of September 21-22, when the cone ruptured, main event leading to the Cumbre Vieja eruption. As more violent processes emerged than had been detected in recent days, it was initially decided to confine populations in areas near the volcano. “It was a solution consisting of being inside the house, with the windows closed and the doors closed and protected against possible breakage of the glass,” clarified Blanco.

But when this decision was made, it was found that two new mouths had appeared on the skirt of the volcano both emitting lava “of great speed and fluidity,” said Blanco. Given the possibility that they could be the start of an opening of a fracture that would join the two emission centres and destabilise part of the main cone, it was quickly decided that evacuations were the best course of action.

The director of the IGN in the Canary Islands illustrated the volcano’s two emission systems, so far, which are separated from each other by a small distance, and which are emitting a very similar, very fluid kind of lava, on top of the previously emitted layers. These emission centres release pressure as long as they do not produce fissures that destabilise the system, which can emit shockwaves like those produced this Friday.

“The dangers that the population would face if the volcanic cone were to collapse would be lava flows of high temperature and and high gas content, not very viscous, that can jump over topographic obstacles”; the ballistic fragments would also have a greater range and there would be dense ash fall. But of all these scenarios, the worst would be the collapse of the volcanic cone.

Technical director of Pevolca, Miguel Ángel Moncuerde, said that the confinement order was initially considered adequate because an increase in the intensity of the volcano had been detected, with an increase in the projection of pyroclasts of larger than usual size that can cause damage. “It is an interesting emergency and civil protection solution for cases like this,” he added. But just when the order had been issued for Tacande de Arriba, Tacande de Abajo and Tajuya, there was a huge increase in the intensity of the volcano ” and “the most logical thing” was evacuations after all.

Approximately 160 more people have had to leave their homes, while teams continue to monitor the movement of the volcano, in the interest of continued citizen safety. Within the next 24 hours the scientists expect to be able to have a clear review to know if this activity peak, reached around 3:20 pm has been reached again during the night, while making sure that local residents will not have to suffer the consequences of sudden increases in intensity of the volcano, Moncuerde told reporters.

Blanco also remarked that the eruption is a dynamic phenomenon and adaptation is necessary, with the safety of people as the primary objective. Therefore, it is recommended that residents keep themselves informed about Pevolca updates.