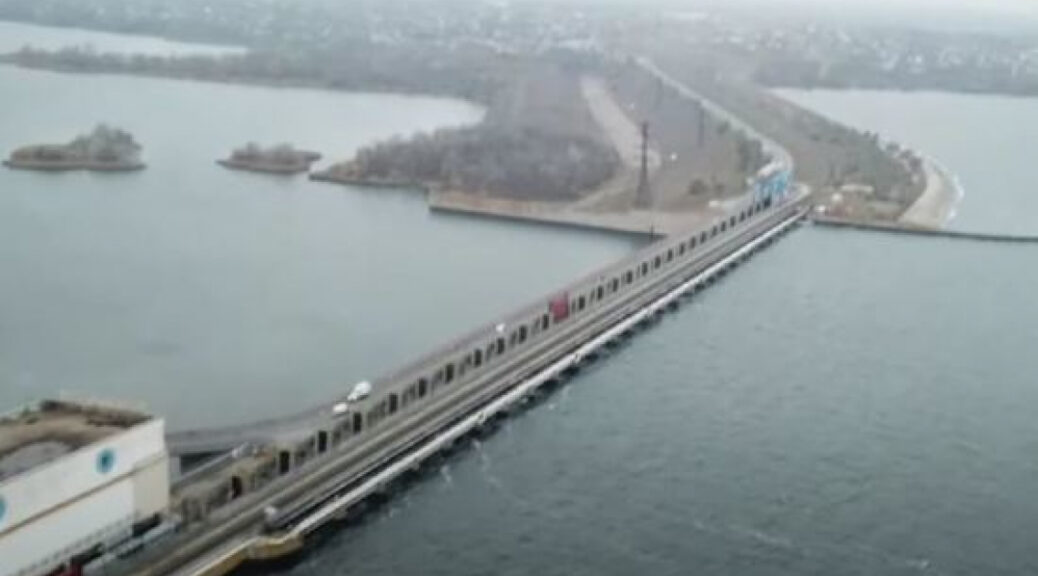 The Ukrainian Nazi Army fired six (6) American-supplied HIMARS Multiple Launch Rockets at the Kakhovskyaya Hydroelectric Power Plant, shown above, in an effort to cause massive flooding of the Kherson region, for leaving Ukraine and becoming part of Russia.  All 6 HIMARS shells were intercepted and destroyed. 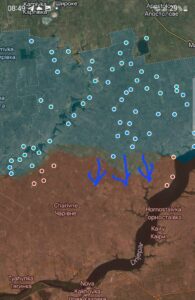 The location of this power station is shown on the small map below: 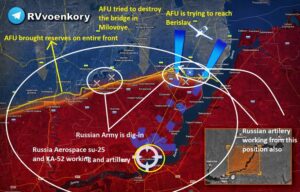 Had the Dam been hit and collapsed, all the water to the north of the Dam would have gone into uncontrolled release.  The flooding would have been forty feet deep in parts of Kherson located south of the Dam.

Yesterday, acting on covert intelligence, the Russians began evacuation of the civilian population in areas of Kherson likely to have been affected if the Dam was destroyed and flooding came in.   Upwards of sixty thousand (60,000) civilians evacuated, some of whom are shown in the news video below:

Meanwhile, Ukrainian forces launched another offensive against Kherson, in the exact same locations as their prior failed attempts:

The Ukraine Nazi Army went on the offensive in the south, trying to break through to Berislav in the Kherson region. Ukraine has even brought a reserve into battle.  It appears it is not possible to for Ukraine to break through now.  The battlefield map below tells the story:

Russian Su-25 attack aircraft and Ka-52 “Alligator” helicopters are working on the Nazis and stopping them for now.

The fighting is described as “fierce.”

Elsewhere of note, Ukrainian troops on at least 30 boats tried to land in Energodar to capture the Zaporozhye Nuclear Power Plant – again.

The battle went on for several hours, the sortie was stopped because most of the Ukrainians have been killed by the Russian Army.

At this hour (8:29 AM EDT) Energodar is completely de-energized due to a missile attack on the Luch substation, restoration work is underway.

The Defense Ministry reported that today, at about 4 am, the enemy forces of up to two companies made another attempt to land troops on the left bank of the Kakhovsky reservoir and seize the territory of the nuclear power plant.

As a result of the active actions of the Russian troops guarding the outer perimeter of the Zaporizhia nuclear power plant, the enemy’s landing force was destroyed.

The remnants of the landing force were dispersed by artillery fire in the water area of the Kakhovsky reservoir.

There were no casualties or damage at the station. The radiation situation is normal.

“After artillery shelling of the city, they attempted to land, including to capture the Zaporozhye Nuclear Power Plant. The fighting continued for several hours, at least three or three and a half. The assault was fended off,” he said.

Later in the day, the Russian Defense Ministry stated that the number of troops involved in the Ukrainian operation comprised up to two companies and that a total of 37 boats of various types were used. The military claimed that Kiev lost over 90 soldiers and 14 boats in the botched operation, while its remaining forces were dispersed by Russian artillery fire.

Energodar is located in Zaporozhye Region, one of four former Ukrainian regions that voted to become part of Russia last month. Energodar has been under Russian control since March.

The Zaporozhye Nuclear Power Plant, the largest facility of its kind in Europe, is located on the shore of the Dnepr just outside the city. The site was the focus of a diplomatic spat between Russia and Ukraine, with both sides accusing each other of attacking it and risking a nuclear disaster. Kiev also claimed that Russia was stationing heavy weapons at the facility, which Moscow denies. Russia formally included the plant in its civilian atomic energy infrastructure earlier this month.

The provincial capital, the city of Zaporozhye, remains under Ukrainian control and served as the staging ground for the amphibious operation, according to Rogov.

After fierce artillery battles, two Ukrainian infantry battalions of the 128th Mountain Brigade and one battalion of the 17th Brigade began to advance in the Novaya Kamenka – Berislav direction. Ukrainian forces number 1,000 soldiers.

Ukrainian motorized infantry units are actively supported by artillery and a large number of medium-range attack drones. The Russians report that at a great distance, outside the range of their air defense, they are operating a “Bayraktar” UAV.

The situation is extremely critical for the Russian forces despite the first small victory. The Ukrainians are moving all available forces from neighboring regions, their reserves and Territorial Defense units.

Russian forces have found a very large concentration of Ukrainian troops in the Kherson region and in the Nikolaev and Krivoy Rog regions, which means that it is only a matter of time before the region turns into a living hell…

The Russians are called to fight the biggest battle yet.

The Ukrainian offensive has begun – Berislav is the first target

The Ukrainian forces launched a counterattack in the south trying to break the Russian defense in the Berislav area of ​​Kherson.

According to information, the Ukrainians have been moving forces in the direction of Berislav for a month now and are trying to break through the Russian defenses.

According to Russian sources , “in recent days, the Armed Forces of Ukraine sent forces and conducted reconnaissance near Dudchan and Novaya Kamenka.

MLRS HIMARS were hitting the nearest forts in the area, while for some reason they tried several times to destroy the bridge at Mylovoe, which was of little importance.

On October 19, early in the morning, the Ukrainians began artillery preparation and went on the attack with up to two battalion tactical groups, more than 20 tanks, about 20 TOMAs and armored vehicles.

An armored group of the Armed Forces of Ukraine from the Novogrigorovka side tried to break through the Russian defenses at Novaya Kamenka while the other moved again near Dudchan.

The Ukrainians continue to fire artillery deep into the front, a fierce artillery battle is taking place in the area with the Russians responding from the other side of the Dnieper.

According to the data so far, the Russian Forces hit units of two brigades of the Ukrainian army and formations of foreign mercenaries in the Nikolayev-Krivoi Rog area.

The Ukrainians have losses in units of the 60th and 35th Infantry Battalions of the Ukrainian army as well as in the mercenary formations of the Foreign Legion.”

Ukrainian units tried to break the defense of Russian troops towards Bruskinskoye (Kherson) and in the Nikolaev-Krivoy Rog direction.

The attack was repulsed, over 90 Ukrainians were killed, while one tank, 8 armored vehicles and 21 motorized vehicles were destroyed.

Kherson turns into a fortress – It will be hell…

Earlier, Russian media reported that the Russian administration is preparing Kherson for defense in the context of an imminent large-scale offensive by the Armed Forces of Ukraine.

“The civilian population from Kherson will be evacuated, the city itself will be turned into a fortress before fierce battles with the enemy.

The Russians continue to dig trenches in the defense line created after the reconstruction: the southern part of Dudchan – Novaya Kamenka – Ishchenka – Bruskinskoye – Sukhoi Stavok.

The formation of the “fist” of the Armed Forces of Ukraine was noticed in advance, therefore the announced evacuation of the civilian population from Kherson is correct. Transfer to the left bank of the Dnieper is carried out by two motor ships to Alyoshki and Golaya Pristan. Before boarding the ships, citizens undergo a thorough check.

Further, from the suburbs of Kherson on the left bank, buses are waiting for people for onward transportation to safe areas of Russia, in particular the Krasnodar Territory and the Rostov Region. Within a week, up to 60,000 people are planned to be evacuated from the bombings.