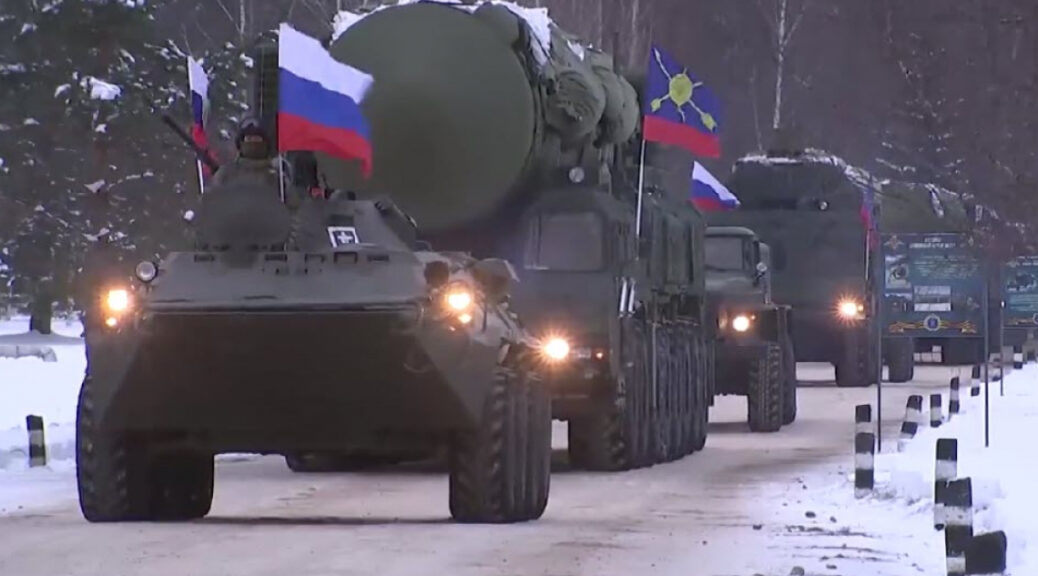 It is clear that on the battlefield things are going very bad for the Ukrainians.

Here is the Duran commenting

Kiev guessing game, as Putin and Shoigu land in Belarus

This is reality about electricity infrastructure in Ukraine, especially Kiev.
Power engineers said that in Kiev there is enough electricity for only 20% of the population

YASNO General Director Sergey Kovalenko said that long-term power outages in Kyiv are a reality, as there is enough electricity in the city for only a fifth of consumers.

According to him, the situation in Kyiv is very difficult. Today, all three groups are almost completely turned off at the same time, since there is only enough electricity for 20% of the population.

“Are long blackouts in Kyiv real now? Yes, 10 hours without electricity is, unfortunately, a reality today. It is difficult to predict how quickly we will return to stabilization,” Sergey Kovalenko noted.

Recall that several districts were switched off today at 6:30 in the morning and have been without electricity for 14 hours, and the mayor of Kiev, Vitaliy Klitschko, said that the shortage of electricity in the capital is currently 50% .

US Col. R. Black: Battle Lost for Ukrainians – Their Losses at Bakhmut Are Massive & They Have Seen Nothing Yet

“The battle for the Ukrainians has been lost and the war has already been decided,” said retired US Army Special Forces and Marines Colonel Richard Black in his double intervention.

As he pointed out during a conference of the Schiller Institute, the battle in Artyomovsk is disastrous for the Armed Forces of Ukraine without counting the fourfold increase in the troops of the Armed Forces of the Russian Federation by the beginning of 2023.

“Ukrainian troops are being thrown into a death trap in Bakhmut by the thousands and seem to have no solution.

“Russia is winning in Bakhmut, Ukraine is losing, and this shows that this is becoming a major strategic development of the war, ” the colonel said.

Black noted that the number of dead Ukrainian soldiers is staggering and the population of the country will not allow to replace the losses in manpower.

The conflict is lost, the colonel concluded.

At another point the American Colonel states:

“I would just say to the Ukrainians ‘be careful because if you think things have been bad until now, you will see something that is far beyond anything you have imagined so far.'”

Ukraine is losing more men a day in Bakhmut (alone) than the United States lost in a month during the Vietnam War.

And Ukraine has a smaller population than the USA!

Here is the full interview:

I think it behooves us to look a little deeper at what the mood is in Russia. Russians are being primed for war, not so much with Ukraine, but with NATO and they are talking nukes. This pop song called Sarmatushka celebrates their most powerful missile.
It is deeply shocking (to me anyway) – I don’t think we have seen this sort of rhetoric since the days of Stalin.

Here is a partial translation

It’s got the full force of the Yenisei

Its will is stronger than the Ural mountains

It’ll scatter our enemies into dust in an instant

It’s ready to carry out the sentence

The US’s air defence is no hindrance to it

It is not afraid of sanctions

For the Sarmat there is only pleasure

At the United States

Meanwhile, in the United States

The entire fleet of U.S. Air Force B-2 Spirit stealth bombers was grounded on Monday, in response to potential safety defects on the aircraft

The Air Force confirmed a stand down of the B-2 fleet in an emailed statement to American Military News.

The decision to ground the fleet came after a B-2 came after an unspecified in-flight malfunction forced a B-2 crew to make an emergency landing at Whiteman Air Force Base in Missouri on Dec. 10. The base said “there was a fire associated with the aircraft after landing, and the base fire department extinguished the fire.”

“Four US HARM anti-radar missiles were shot down in the airspace of the Belgorod region,” the Russian Ministry of Defense confirms.

In mid-August, Washington supplied AGM-88 HARM missiles to Ukraine. According to open sources, the missiles are used by the Ukrainian MiG-29 and Su-27 aircraft.

“These missiles showed actually zero effectiveness in the framework of the hostilities in Ukraine – most of them were shot down by Russian anti-aircraft missile systems, another part was suppressed or set aside by means of electronic protection of air defense systems,” a source said, adding that some of these missiles also failed or missed the target.

The source noted that the low efficiency of HARM missiles is due to their mediocre maximum speed, which is a little over 600 meters per second (1342 miles per hour), and high visibility.

According to the source, Ukrainian aviation uses these missiles from a long-range to avoid destroying the aircraft, which allows the Russian military to detect missiles long before they approach the area where Russian air defense systems are located.

At the same time, the source added that HARM missiles create certain difficulties in time-coordinated combined strikes because air defense systems are automatically redirected to them as a priority threat.

“However, Ukrainian troops have not yet been able to hit a single radar of the Russian air defense system, as well as illumination and engagement radars in the area of ​​the special military operation with HARM missiles,” the source said.

The HARM missile was adopted by the US air force in 1983. The maximum speed of the missile is declared at 2,280 kilometers per hour or 630 meters per second, while the launch range is up to 100 kilometers when used from high altitudes.

For comparison, the maximum speed of the Russian AS-17 Krypton and AS-11 Kilter anti-radar missiles exceeds 1,000 and 1,100 meters per second, respectively, and the launch range is over 200 kilometers. 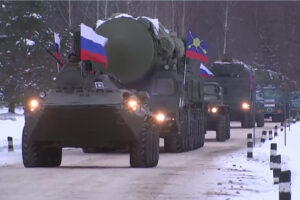 Last week, the Russian Ministry of Defense released videos of two separate “YARS” nuclear ICBM’s being loaded into silos.  Turns out, there was a third, in Bologovsky. Russia’s message to the West is clear.

In Bologovsky ,from the Strategic Missile Forces, a missile regiment of mobile “Yars” took up combat duty (third deployment of such system so far in a few days)

The “Yars”, which is being put into combat, is replacing the Topol mobile missile system.

He took to Telegram on Saturday to post a short video of the work that’s taking place. It showed technicians setting up shields over the tanks that hold spent nuclear fuel.

The dome is designed to protect the storage facilities from shrapnel and improvised explosive devices carried by drones, the official explained, adding that it would be reinforced further at a later period.

Russia’s nuclear energy corporation Rosatom had earlier warned that damage to the spent-fuel containers risks a release of radioactive material into the atmosphere, with unpredictable consequences.

The construction of the dome comes amid continued attacks on the Zaporozhye nuclear power plant and the nearby town of Energodar, which Moscow blames on Kiev. Russia has repeatedly said that such strikes could result in a nuclear disaster that would eclipse the 1986 Chernobyl incident and affect many countries in Europe.

Ukraine initially claimed that the Russian military had been hitting the plant itself as part of “false-flag” operations to make Kiev look bad. However, Ukrainian general staff eventually admitted to striking the area around the nuclear facility.

The Zaporozhye nuclear power plant, which is the largest on the continent, has been under Russian control since February 28. All of the reactors at the facility are currently shut down due to the security situation.

Zaporozhye Region, together with three other former Ukrainian territories – Kherson Region and the People’s Republic of Donetsk and Lugnask – joined Russia in autumn after holding referendums.

This is from a month ago

In the latest reflection of the Kremlin’s expanding war effort, bomb shelters across Russia are being brought back to life after more than three decades of neglect since the end of the Cold War.

State workers are quietly checking basements and other protected facilities, repairing and cleaning installations not used since the Soviet era, according to people familiar with the efforts.

This information is potentially very important

Russian President Vladimir Putin will make a major announcement at a Defense Ministry meeting next week, according to Russian state media.

“We are waiting for important statements,” Pavel Sarubin, host of the programme “Moscow.Kremlin.Putin,” told state broadcaster WGTRK on Sunday.

According to the programme, Putin will chair an annual expanded meeting of the Defence Ministry. An exact date for the meeting is not yet known.

However, Putin is expected in Minsk on Monday for talks with Belarusian ruler Alexander Lukashenko.

At a government meeting last week, Putin leader had already demanded that armament plans be adjusted.

It is considered possible that he will continue to push the conversion of his own economy to a war economy, as his own troops continue to have problems with supplies in the course of the war on Ukraine.

Because of the continuing difficulties in the war, Putin has largely avoided the subject in recent weeks and has also cancelled his traditional annual press conference shortly before Christmas.

Hal Turner goes on to say:

Intelligence circuits are also carrying as-yet-unsubstantiated claims Putin will announce another mobilization of upwards of one million additional military conscripts.  He will allegedly tell the Russian people that his country now finds itself at war with the entire west, and the very existence of Russia itself is now at-stake.  He will allegedly point out that western NATO countries are not merely supplying weapons to Ukraine, they are supplying mercenaries, and even creating phoney identities for active-duty troops, to come into Ukraine and operate advanced western weapons systems like HIMARS.

In addition, he will allegedly point out that NATO spy aircraft are not only watching Russia, but providing actual attack targeting data for precise weapons strikes against Russian troops, while at the same time claiming publicly they are “not a party to the conflict.”

He will allegedly also tell the Russian people that think-tanks within the US and Europe are already drawing lines on maps to decide the break-up of Russia into over a dozen small entities, with those lines being drawn so as to cause ongoing, never-ending ethnic and religious conflict within Russia itself.  Russia, he is allegedly going to say, “will be destroyed and never be a nation again.”

He will allegedly point out that Russia itself has already suffered numerous actual attacks upon its own territory, including bombings in Belgorad, arson attacks deep inside Russia affecting defense production companies, a missile attack upon the Kerch Strait Bridge, thereby justifying changing the scale and scope of what is presently a “Special Military Operation.”

There is also a SINGLE, UNCORROBORATED INTEL CLAIM, that Putin will ask the Russian Parliament to declare war upon Ukraine . . . so that any country formally assisting Ukraine could immediately risk being attacked itself.  Again, this is only a SINGLE Intel claim and it is un-corroborated.

Canadian Prepper also talks about this in his latest video

Putin is About to Announce Something BIG, Nuclear Preparations, Stock Up Now