For the 10 years of this blog I have been talking about the slow collapse of New Zealand and the total denial as well as the housing bubble that finally seems to be bursting.

As the world sinks into recession/depression and moves towards global famine and war there is total denial from the NZ media, shown by Newshub’s headlines for today. 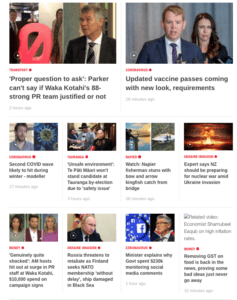 Dig a bit deeper and you will find articles that could have come from Pravda that indicate all is not right – all without any context or of there is any it is all fake.

The possibility of New Zealand going into recession is “rising by the day”, an economist at one of the country’s biggest banks has warned.

BNZ head of research Stephen Toplis said on Wednesday the chance of a soft landing for the economy was fading – and getting dangerously close to recession territory.

“Our central forecast, currently, is that New Zealand’s growth stalls completely in 2023,” he said. “The danger is that the wheels well and truly fall off.”

“The risks are going up and it’s not a good outlook, and it’s grim news,” he told AM.

Curtayne said one thing to blame for the outlook was the cost of living struggles.

New Zealand inflation was running at 6.9 percent, while wages have only risen 3 percent. This gap means the average working Kiwi is going backward when it comes to the cost of living.

Curtayne told AM host Ryan Bridge people were having to spend more on essential items and less on other commodities, which was hampering economic growth.

“At the other end of the spectrum is the people that have been more fortunate to have a bit more money and own housing… house prices are now coming down as a result of the interest rates and the mortgage rates that have gone up.

“That means that those people that do actually have a bit more money may feel less wealthy with asset prices going down, and tighten their belts. This just does, unfortunately, lead to slower economic growth and [increases] the risk that we do actually dip into recession maybe next year.”

The latest Gross Domestic Product figures showed New Zealand had achieved 3 percent growth in the December quarter, according to Statistics NZ. Those figures don’t, however, reflect the Omicron outbreak and growth was widely expected to slide again in the next quarter.

Don’t worry, folks. We’ll all sign a petition and they will  bring down the prices. It’s all the fault of greedy supermarkets. You son’t need to worry your head with understanding (or planting a garden)

Consumer New Zealand has launched a petition calling for the Government to regulate access to wholesale supply to help bring down massive supermarket profits.

It comes after a Commerce Commission report recommended major changes and found the grocery sector is “not working well for New Zealand consumers”.

The property market is now being underpinned by a high supply of homes as sales activity plummets and house prices drop.

According to the Real Estate Institute’s (REINZ) latest report, the number of properties sold fell 35.2 percent annually to 4860 but the total number of houses for sale nationally increased by 70.8 percent to 27,050.

The national median house price for New Zealand excluding Auckland was $755,000 – 2.4 percent lower than a month ago.

The report said the house price index only rose by 6.3 percent in the 12 months to April – compared with an annual increase of 9 percent in the year to March.

“We’re seeing a slowdown in activity, there is more stock staying on the market for longer and while annual price growth is more moderate, the month-on-month trend shows a fall in median prices,” Baird said.

“Falling attendance at open homes and auction rooms and a decrease in buyer enquiries were reported across New Zealand – exacerbated by a spate of public holidays through April.

No regions, with the exception of Marlborough at $764,000, reported a new record median price in April.

“There is a lot more property on the market and combined with a less positive financial and economic outlook, we are seeing demand dissipate – alleviating upward pressure and moderating price growth,” Baird said.

“However, looking at the month-on-month figures, it’s clear the median property price is falling.”