A Russian nuclear-capable X-55 cruise missile was shot down by Ukraine air defenses over the capital city of Kiev today.  A photo of the wreckage and identification of the actual missile model, and type, appears below.  The X-55 is designed specifically to carry a single, 200kt, nuclear warhead.

According to preliminary information, early this morning Ukrainian Armed Forces shot down two cruise missiles over the capital city of Kiev.

One of them was a Kh-55 model (Russian designation X-55) which was originally developed to carry a single, 200 kiloton, nuclear payload.

However, this specific missile did not contain any warhead at all – instead, it contained a dummy imitator of a nuclear warhead used for missile testing purposes.

Here is a photo of the downed cruise missile, with the dummy replacement warhead still intact, from Ukraine, this morning: 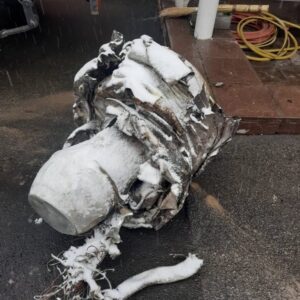 This was no accident.  This was no error on the part of Russia; it was, it seems, a Warning.

Covert Intelligence communications circuits are a literal blur, with all sorts of transmissions about this incident because this took place just three days after US CIA Director visited his Russian counterpart and explicitly told Russia of the consequences of using a nuclear device against Ukraine.

CIA Director Bill Burns met with his Russian intelligence counterpart, Sergey Naryshkin, in Ankara, Turkey on Monday as part of an ongoing effort by the US to “communicate with Russia on managing risk.”

By sending the X-55, which had to be specifically pulled out of the actual Russian nuclear arsenal (they do not use this missile with conventional warheads) – the Russians are explicitly telling the US and NATO to “go fuck yourselves” and warning Ukraine, “the end is very near.”  Put simply, today’s launch of this missile is Russia’s reply to the US CIA Director about “managing risks” and this reply shows the US they have some risk they better manage as well.

US Mass-media has previously reported that national security adviser Jake Sullivan has also been in touch with his Russian counterparts to warn them of the consequences should Russia use a nuclear weapon in Ukraine.

Today’s deployment and firing of a Russian X-55 shows that both Sullivan and Burns have not made any valuable impression upon Russia.

Now, there is a conventional variant of the X-55, the kh-555. Russia had used Kh-555 missiles to strike Ukraine before – these are “regular” rockets loaded with non-nuclear explosives. Meanwhile, the Kh-55 missile is the original model designed specifically to carry nuclear warheads.

Simply put, Kh-55 and Kh-555 use basically the same rocket, but with a different payload. However, it is simply impossible for this to be an accident; the X-55 cruise missile itself would have had to be pulled from Russia’s separate and segregated nuclear storage.  They don’t have these missiles just laying around everywhere so someone could grab one by mistake.

This is, perhaps, the single most frightening display of Russia’s willingness to win, ever undertaken.  This incident changes everything for the US and for NATO because it makes clear the Russians will not back down, are not intimidated, and will not stop no matter what the US or NATO do.

Intel Circuits are blazing with the interpretation that this is a final warning to Kiev and to the US/EU/NATO.

It was just a couple weeks ago that news outlets in the US and EU reported word from a senior US Intelligence official that there had been “worrisome developments with Russia’s nuclear arsenal.”   At the time, the official would not say what those developments were.   Now, we know.

Aiming at Kyiv: Russia fired a missile with a virtual nuclear warhead against Ukraine! – First use of Kh-55 from the nuclear arsenal

A few hours ago, NATO and Ukrainian officials found themselves in front of a terrifying discovery as they located the wreckage of a Russian missile carrying a virtual nuclear warhead (nuclear combat unit simulator).

The missile fell in the vicinity of Kiev.

Russia, during the large-scale bombing yesterday morning on the 15th of the month, proceeded to simulate a nuclear strike against Ukraine. In fact, Russia fired the missile simply without the nuclear warhead.

It is the first use of Russia’s nuclear arsenal in the Ukrainian theater of operations even for the requirements of a simulation.

According to the first information, early on Tuesday morning the Ukrainian Armed Forces shot down two cruise missiles. One of them was the Kh-55 model (Russian designation X-55) developed to carry a nuclear payload.

However, this particular missile did not contain any warhead. Instead, it contained a nuclear combat unit simulator.

The shock is simply enormous both in Ukraine and in the neighboring NATO countries.

They did not use the Kh-555 missile

This discovery raises some interesting questions.

The first fact is that the Russian Federation did not use the conventional Kh-555 ballistic missiles but the Kh-55 which is also armed with a nuclear warhead.

Russia has used Kh-555 missiles to hit targets in Ukraine in the past, these are ballistic missiles loaded with non-nuclear explosives ie conventional ones.

Simply put, the Kh-55 and Kh-555 use basically the same missile carrier, but with a different payload. Their heads are structurally different and can be recognized by experts relatively easily.

And the Ukrainians conclude that either this missile with a dummy nuclear warhead was simply used as a somewhat less expensive decoy aimed at misleading Ukrainian air defense systems, or the Russians simulated a nuclear strike.

It is an indisputable fact that the Russian Army used one Kh-55 missile (Russian designation X-55) from its nuclear arsenal.

Russia: We discussed the nuclear issue with the US in Turkey

It is no coincidence that today we also had the first official admission from the Russian side about the talks with the USA. These were about the possible use of nuclear weapons!

Burns drew attention to Sergei Naryskin, the head of Russia’s SVR foreign intelligence service, about the consequences of the possible use of nuclear weapons and the risks to strategic stability, according to the US side.

It was the first high-level, direct U.S.-Russia contact to be known since Russia invaded Ukraine in February. Burns, a former US ambassador to Russia, was sent to Moscow in late 2021 by President Joe Biden to draw attention to Putin about Moscow’s troop buildup around Ukraine.

“The contact (between Burns and Naryskin) was initiated by the American side, ” Ryabkov told RTV1. “The matters discussed there were of a sensitive nature.”

“The dialogue continues, but it is not systematic in nature,” he said.

“But we are not standing with our hats in our hands: Americans need a dialogue with us just as much as we need them.”

Ryabkov said another contact with the United States will take place later this month, when a bilateral advisory committee on the New START arms treaty convenes on November 29 in Cairo.

Earlier, Turkish President Recep Tayyip Erdogan told reporters on the sidelines of the G20 summit that US and Russian intelligence chiefs discussed non-use of nuclear weapons.

“According to information received from the head of the Turkish intelligence service , Russia and the United States discussed the non-use of nuclear weapons.

The parties are currently showing no sign that they might try to use them. We would like to see them meet more often, and we are ready to promote it.

The use of nuclear weapons can lead to a new world war. We must rule out this risk, ” Erdogan stressed.

See images. The wreckage of the rocket