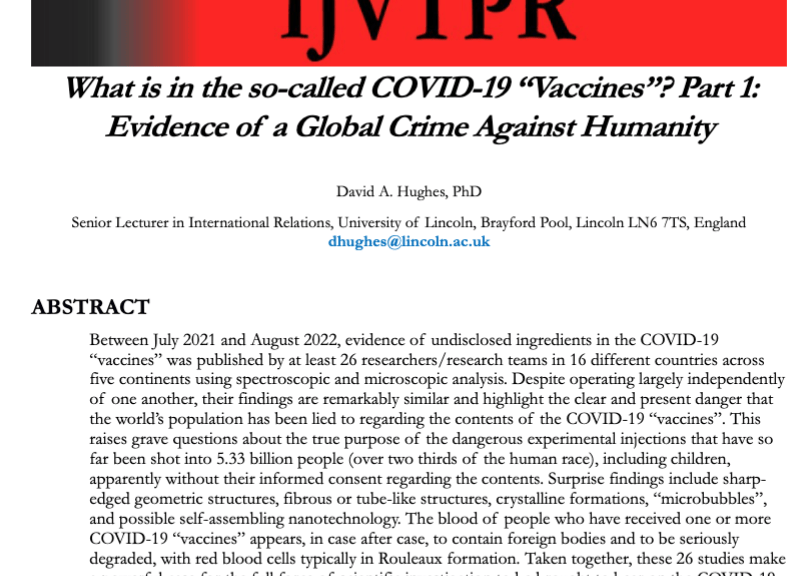 Nanotech or Microtech in the C-19 Jabs? It Is All Bad

Short version: here is one of the most important scientific papers you will ever read. It is a review of 26 separate science groups examining the covid-19 shots, proving serious contamination. Download in case it is removed. Help yourselves and your loved ones by digesting its implications and joining others to act.

Long Version: Update On Microtech in the C-19 Injections

We’ve had many people contacting us for updates on our microscopy work and possible microtech in the vaccines, following our presentation of the initial findings of several groups in New Zealand to the police and government, all documented at NZDSOS.com.

NZDSOS is not doing any ‘scope’ work now ourselves, but is still connected with Kiwis that are, and increasingly with overseas groups that are finding the same things, who now total 30 independent teams. We are all investigating the implications and what to do about them. This ‘commonality of contamination’ is reflected by the universal response of these countries’ medicine regulators and police. Nada. Zilch. Zero.

This inexplicable silence is as frightening as the findings themselves, as it speaks to a coordinated strategy to ignore or deny anything that might keep people’s sleeves firmly rolled down. Why is it so essential to jab the whole planet over and over, even when people are very obviously injured by an earlier jab, in the face of failure of the shots to prevent covid-19, and strong and consistent evidence of massive harm?

Just published is a summary of much of the groups’ discoveries.  Dr. David Hughes’s  excellent peer-reviewed paper “What is in the so-called COVID-19 “Vaccines”? Part 1: Evidence of a Global Crime Against Humanity”. We recommend strongly to download it while it is still available.   https://ijvtpr.com/index.php/IJVTPR/article/view/52/83.

Here is a video presentation by one of the many scientists whose work is presented by David. Here is another. And a local microscopist, Dr Robin Wakelin here. Everyone should watch these. Your life may depend on this information.

New Zealand groups are included, but please note a small misattribution in that the image attributed to Dr Matt Shelton on page 95 was actually taken by the “Life of The Blood” team here in NZ.

Whatever the final explanation for all these groups’ findings, several things are clear:

1. The standard for recalling these products immediately is vastly exceeded. DO IT NOW!

2. The C19 injections DO contain self-assembling microscale structures. This is irrefutable, and should horrify any rational person, who must then require regulators to explain their criminality or rank stupidity.

3. The blood of vaccinated people – many without any symptoms – shows alarming and consistent abnormalities never seen before the rollout, by clinicians who have used live blood analysis for decades. Ribbons and strange crystalline structures easily big enough to block blood vessels are seen, as is evidence of damage to the red blood cells and the oxygen-transporting haemoglobin they contain.Alarmingly, some of these changes can also be seen in the blood of unvaccinated people too, echoing the development of ‘self-replicating vaccines’, so far only used officially in veterinary medicine. The phenomenom of ‘shedding’ causing immune reactions in close contacts has been confirmed in several studies and by Pfizer itself.

4. The dramatic rise in all-cause mortality in the vaccinated, especially obvious in younger people, and the close temporal relationship to sudden deaths or severe rapidly fatal illness after being jabbed, are both proof of a toxic aspect to the jabs. Staggering numbers of injured people can attest to unpleasant and prolonged effects too. People should understand that pre-covid, reactions to vaccines were very rare.

5. After death in some vaccinated people, very abnormal fibrous clots are being extracted during the embalming process, also here. Again, these have never been seen before. Analysis shows they have accumulated very electrically conductive metals from the body, such as sodium, aluminium and tin.

6. Independent analysis of vaccine vials from around the world show they don’t contain what is listed on the label. Some have not shown RNA at all.  All the brands tested show abnormalities.

The work profiled in the paper involves mainly microscopy, but some groups have done further analysis of what elements some of these structures contain.  This substack blogger, an integrative physician who specialises in chelation and intravenous vitamin C to help remove well-known metals like mercury, arsenic and cadmium from the body, has done a great job summarising the various groups and their results. Again, there is a consistency of findings, especially in the arena of heavy metals, and not just the common toxic metals like  lead and cadmium, but also gold, aluminium, gadolinium, antimony, chromium and even the radioactive element thullium.

Some toxic metals have shown up in vaccine analysis before the era of covid and were thought to represent accidental contamination from sloppy manufacturing, obviously unacceptable of itself.

There are also the  reports last year of Dr Campra with La Quinta Columna, the UNIT group from the UK, and the German pathologists conference from last September as discussed in our earlier articles here and here. ​​​​​​​Dr Arne Burkhardt  did another pathology conference in March 2022.

All these groups are working on understanding the meaning of these findings, and how to help injured patients. What they are NOT doing is ignoring their own evidence just because it makes their brains explode with distress, and them sound like crazies. We’ll leave that to the police and regulators, who look beyond the evidence we present to what the implications might be and fall apart emotionally.

The disclosure or understanding of what is actually in the vaccine vials should be completed before the population is exposed to the ‘next generation’ vaccines which have not undergone any human clinical trials but which are currently appearing on the world stage – bivalent Wuhan/Omicron BA.1 and Omicron BA.4/BA.5 vaccines.  Even Paul Offit, vaccine proponent extraordinaire, said in a Jun 2022 VRBPAC meeting referring to the science about a potential bivalent vaccine: “This is a new product, and as a new product, it should be handled as a new product and when the WHO says that this may be of value, I just think we need a higher standard [of evidence] for protection than what we’re being given. It’s uncomfortably scant.” See here, at 6h 35m

In further news, we are about to discover that an Israeli Health Ministry confidential survey showed proof of causation of illness from the jabs; that the majority of adverse effects lasted for more than 6 months, and Pfizer said it had “no idea” this could happen!  Denmark has made illegal the injection of under 18s, and the UK has just followed suit with the under 12s, as well as saying that there is no evidence of safety in pregnancy and breastfeeding!

Our litany of truthful posts shows the following, which may help put the above in some context:

It is far easier to fool people than convince them they have been fooled.
Mark Twain

Here are the first few microscope images we took that showed us, starting within minutes of beginning to look, in January 2022, that the Pfizer vax appeared ‘spiked’. All we should see based on the ingredients is a bland emulsion, looking a bit like milk, or cloudy beer. The MOH says these pictures are faked, but our sworn statement to NZ police in complaint 220217/0669 says they aren’t, and we were careful with our technique. The slides and coverslips were clean and high quality.The pictures are between 100x and 1200x magnification with an ordinary light microscope – so they look shocking at this enlargement, and are shocking,  since they should not show much at all. Remember though, there are two secret ingredients, largely thought to be a military-grade “hydrogel”: a witch’s brew of who knows what.

This was very provisonal work only as the high quality microscope died inexplicably the following day and had to be returned for repair, and thence to the benefactor that had bought it for our use.

These structures below became visible from the gloomy emulsion background after about 30 minutes. Note the background of small ‘doughnut rings’, but far too large to be Pfizer’s lipid nanoparticles, supposedly the only ‘structure’ in the vials. The small spheres are about 3 microns in diameter. 1000 microns = 1 mm. Dismissing them as “just crystals” is over simplistic. Of what? Why? Where else are they found like this?

These next two are both of the same 3-D structure, with other shapes associated with it, and the third shows unknown structures. There are many other slides we will upload later.

The next slide below is a drop of fresh healthy blood at the same (maximum) scale as the 3 photos above. The abundant red cells are shaped like donuts too, with a central depression but not hollow. They average just under 8 microns in diameter (1000 microns = 1 mm).

Here is some blood about an hour after mixing with a drop of vaccine. The red cells are completely destroyed and amorphous ‘debris’ is scattered around. The above referenced article contains many pictures of very long “nanotubes” in people’s blood, similar to below. Note the close-up of the tube, ‘with a twist’.

Finally, although we have hundreds of pictures, here is a favourite, several hours after a drop of ‘vaccine’ was mixed with blood. Explanations on a postcard, please….

If you are grossed out or angry, don’t blame us. But dare you dismiss all the above as untrue? Help us find an explanation. Call your MP. Ask questions and demand answers.

Here is the paper cited 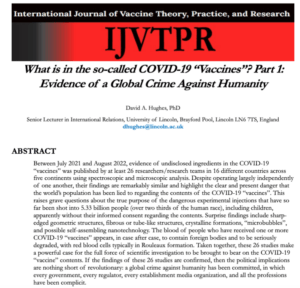 This video is my discussion with Shimon Yanowitz who has conducted direct microscopic examination of C19 injections from vials of Pfizer, Moderna, AstraZeneca and Janssen. Self assembly of structures is evident. This demonstrates clearly that the products are fraudulent and adulterated. The vials contain undisclosed materials and are very different even within the same manufacturer. We are looking for comments from chemists and biologists who have experience with these types of materials, for example DNA scaffolding and design of DNA based structures

IS IT A BIOWEAPON? MRNA/DNA PRODUCTS – DATA, EVIDENCE AND OBSERVATIONS

Covid vaccines: a curious discovery on the graphene oxide question