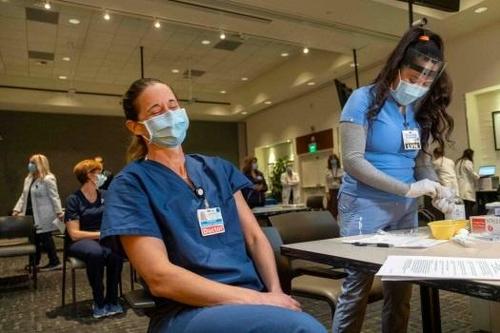 →WHO ‘warns’: Omicron spreading faster than any other Covid variant

→WHO investigating mystery disease, that killed 89, in South Sudan

→ANOTHER new variant discovered in France

Fears of fresh Omicron restrictions within DAYS: MPs could be forced to work through Christmas to approve new lockdown rules if Plan B fails to halt cases surging at year-high ‘200,000 a DAY’ – as Chris Whitty warns pubs and restaurants may have to SHUT

IT WAS ALL PREMEDITATED, TO PROMOTE THE VAX – DR. PETER MCCULLOUGH DROPS THE MOTHERLODE ON JOE ROGAN

Tucker Carlson –  | COVID Omicron is a manufactured threat; no one has died from Omicron in the US, no one

Glenn Beck was on Tucker Carlson’s show on Wednesday night and he discussed the many actions taken by Dr. Fauci and friends before the China coronavirus (COVID-19) hit the US in early 2020.

Beck mentioned that Dr. Ralph Baric reviewed Moderna and Dr. Fauci’s coronavirus vaccine in 2019.  Something we reported early this year in February.

Fauci also worked with other doctors to claim that COVID-19 was not developed in a lab.  This too was a lie.

Fauci also worked with other doctors to claim that COVID-19 was not developed in a lab.  This too was a lie.

Before You Inject Your Child

My name is Robert Malone, and I am speaking to you as a parent, grandparent, physician and scientist. I don’t usually read from a prepared speech, but this is so important that I wanted to make sure that I get every single word and scientific fact correct.

I stand by this statement with a career dedicated to vaccine research and development. I’m vaccinated for COVID and I’m generally pro-vaccination. I have devoted my entire career to developing safe and effective ways to prevent and treat infectious diseases.

Before you inject your child – a decision that is irreversible – I wanted to let you know the scientific facts about this genetic vaccine, which is based on the mRNA vaccine technology I created:

There are three issues parents need to understand:

● The first is that a viral gene will be injected into your children’s cells. This gene forces your child’s body to make toxic spike proteins. These proteins often cause permanent damage in children’s critical organs, including

○ Their brain and nervous system

○ Their heart and blood vessels, including blood clots

○ And this vaccine can trigger fundamental changes to their immune system

● The most alarming point about this is that once these damages have occurred, they are irreparable

○ You can’t fix the lesions within their brain

○ You can’t repair a genetically reset immune system, and

● The second thing you need to know about is the fact that this novel technology has not been adequately tested.

● One final point: the reason they’re giving you to vaccinate your child is a lie.

○ Your children represent no danger to their parents or grandparents

○ It’s actually the opposite. Their immunity, after getting COVID, is critical to save your family if not the world from this disease

The risk/benefit analysis isn’t even close.

As a parent and grandparent, my recommendation to you is to resist and fight to protect your children.

“The world has nothing to fear.”

Data coming out of South Africa indicates that the Omicron outbreak of COVID-19 is already “running out of steam,” and according to one expert, “the world has nothing to fear.”

“Cases in the province of Gauteng – which had surging infections from November – appear to be levelling off, while seven-day infections in Tshwane, one of the early epicentres, are now “relatively flat,” states a report written by the Telegraph’s science editor.

“Case growth is steeper than last week but still has slowed down versus November,” said Louis Rossouw, of the Covid-19 Actuaries Response Group.

Data also shows that the percentage of people who die from a COVID infection has dropped significantly since the arrival of Omicron.

“With the delta variant, around three per cent of infections – one in 33 – were resulting in death, but now that figure has slumped to 0.5 per cent – one in 200 – the lowest it has been throughout the pandemic in South Africa and 10 times lower than in September last year,” states the report.

According to Peter Streicher, a research associate at the University of Johannesburg, death data has already caught up with infection data and there is no significant rise in deaths from Omicron.

“Omicron is extremely mild. The rest of the world has nothing to fear,” said Streicher.

As we highlighted earlier, the South African doctor who first discovered Omicron says “Britain is overreacting” by imposing more draconian restrictions and that the panic “is out of all proportion to the risks posed by this variant.”

Doctor Angelique Coetzee also suggested that lockdowns to stop the spread of the variant would harm the opportunity that Omicron provides to reach “herd immunity.”

Authorities in the UK have also refused to reveal any further information behind what is believed to be the world’s first Omicron death.

Professor Karol Sikora has accused the government of creating “unnecessary alarm,” while asserting the victim probably had co-morbidities and was elderly or died with Omicron and not from it.

Health officials will use Omicron to scare people to taking the booster. The booster will suppress your immune system. You get Omicron. The booster then kills you. Omicron gets the blame. Repeat.

Here’s my guess for how this is going to play out:

See? It’s never ending. Nobody ever figures out that the “safe and effective” vaccine was doing the killing.

Igor’s Newsletter
Boris Johnson’s Biggest Blunder
I watched the latest Boris Johnson Omicron speech with amazement. While I never hated Boris personally, the stupidity of this speech while on the precipice of a real life nightmare, can be understood but cannot be understated…

The study was published on a pre-print server in August, but many people may have missed it.

On August 16, 2021, the BMJ published an article “Covid-19: Children born during the pandemic score lower on cognitive tests, study finds.” The original study, which is awaiting peer review, was funded by the National Institutes of Health, and conducted by a team of researchers at Brown and other U.S. universities.

The BMJ article pointed out:

In a longitudinal study of 672 children from Rhode Island that has run since 2011, those born after the pandemic began showed results on the Mullen scales of early learning that corresponded to an average IQ score of 78, a drop of 22 points from the average of previous cohorts.

One of the commenters (Pasco Fearon) wrote: “Fascinating paper, but the scores are so low I worry something might not be right.” The lead author immediately responded.

While causation was not definitively established, researchers cite concerns about the impact of pandemic policies—stay-at-home orders, masking and social distancing—on early neurodevelopment given the “missed educational opportunities and reduced interaction, stimulation and creative play with other children.” It’s basically hard to piece apart the contribution of each element without a randomized controlled trial.

The health authorities never warned us that following their advice would lead to this outcome. Perhaps they are waiting for the paper to be officially published before they admit that?

In the meantime, I thought it was important for you all to know this in case you missed it. I don’t think the mainstream media did a good job of covering it (for some reason).

On Sunday we noted that hospitals in four states have called in the National Guard to help alleviate a severe healthcare worker shortage caused by mass firings of those who refuse to comply with vaccine mandates.

Now, the Wall Street Journal reports that some of the largest US hospital systems have dropped vaccine mandates for workers amid soaring labor costs and struggles retaining enough nurses, technicians, ‘and even janitors’ to handle higher hospitalization rates due to the Delta variant.

Hong Kong residents returning from the United States are being forced to spend one week in a ‘spartain’ quarantine camp, after which they must serve out two weeks in a hotel room that they pay for themselves, according to the South China Morning Post.

The new measures which were announced on Friday come after the city’s health authorities elevated the country to the highest Covid-19 risk level, prompted by one confirmed case of the Omicron variant in a traveler from the US – an asymptomatic 37-year-old man who had received two doses of the Pfizer-BioNTech vaccine and traveled from Los Angeles on Dec. 7.

The UK government has refused to divulge any details about the first ever death of someone infected with the Omicron variant, leading one professor to assert that the person likely died with Omicron and not from it.

Health Secretary Sajid Javid revealed news of the death yesterday, which is apparently the first of its kind in the world, prompting another round of media-driven fearmongering about the Omicron variant.

However, when asked to provide vital information about the age, medical condition and vaccination status of the victim, the government has refused to do so, citing patient confidentiality.

The government has refused to specify whether Omicron was the primary cause of death or whether someone already suffering with multiple co-morbidities merely died with Omicron.

This prompted Professor of Medicine and Consultant Oncologist Karol Sikora to charge that this was causing “unnecessary alarm.”

Long before the vast majority of Omicron cases were among the vaccinated, and before CDC Director Rochelle Walensky admitted in early October that the Covid-19 vaccine does not prevent transmission, public officials, MSM pundits, and coffee shop doctors across the land were spouting insidious propaganda designed to shame people into taking the jab.

That this is a ‘pandemic of the unvaccinated.’

The phrase implies that the vaccine was a panacea against Covid-19, and anyone who refused to take it wasn’t just part of the problem… but an irresponsible idiot who doesn’t follow the science.

In a late November note, The Lancet published a letter from Günter Kampf, a prolific researcher at the University of Griefswald in Germany.

In it, Kampf absolutely excoriates those calling this a “pandemic of the unvaccinated,” amid “increasing evidence that vaccinated individuals continue to have a relevant role in transmission.”