This is a fascinating article on Elon Musk and Twitter wars from Whatdoesitmean.com which is an eccentric website that continues many useful resources and links. I do not read it necessarily for its conclusions.

“Artificial intelligence is the future, not only for Russia, but for all humankind. It comes with colossal opportunities, but also threats that are difficult to predict. Whoever becomes the leader in this sphere will become the ruler of the world.”

Vladimir Putin  (7  October 1952)  is the President of the Russian Federation.

“With artificial intelligence, we are summoning the demon. You know all those stories where there’s the guy with the pentagram and the holy water, and he’s like, yeah, he’s sure he can control the demon? Doesn’t work out.”

In my scouring the world for the loose threads of our social fabric in order to pull on them to see where they might go, one of them I deemed as most significant over the past year was the growing animosity between President Joe Biden and the world’s wealthiest man Elon Musk.  An animosity that saw Musk refusing to attend any White House event since Biden came to power, and erupted into vitriol when Biden failed to mention Musk’s electric car company Tesla during his State of the Union Address on 1 March—which caused Musk to Tweet out the message: “Nobody is watching the State of the Union”.

On 7 March, six days after Musk mocked the State of Union Address, this vitriol erupted into open warfare when the US Army Corp of Engineers suddenly withdrew Musk’s application to expand his Space X facility in Texas by 17 acres—a Biden retaliation Musk responded to a few weeks later, on 14 April, with a $43-billion hostile bid to buy the social messaging giant Twitter and make it his own private company—and was an unstoppable hostile bid Musk achieved this week when he bought Twitter, and whose path to this victory saw Musk viciously comparing big tech overlord Bill Gates to a pregnant man. 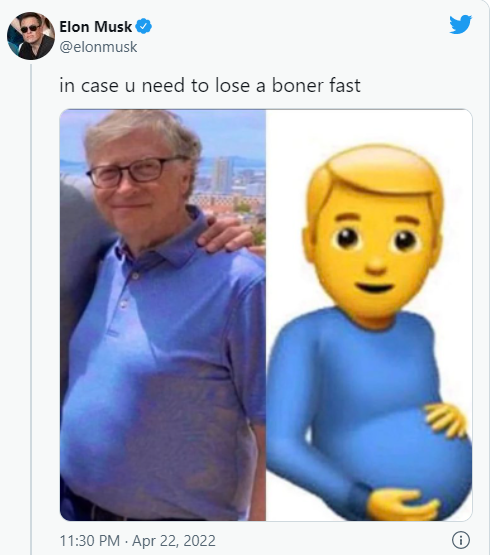 A glimpse into Musk’s thoughts is revealed in his statement: “We’re already cyborgs…Your phone and your computer are extensions of you, but the interface is through finger movements or speech, which are very slow”—is revealed in Musk saying last year about his neurotechnology company Neuralink: “We have a monkey with a wireless implant in their skull with tiny wires who can play video games with his mind…You can’t see where the implant is and he’s a happy monkey”—and this past December, it saw Musk revealing: “Replacing faulty/missing neurons with circuits is the right way to think about it…Many problems can be solved just bridging signals between existing neurons….Progress will accelerate when we have devices in humans (hard to have nuanced conversations with monkeys) next year”.

In a past comment about the powerful and massive Twitter artificial intelligence device, Musk stated: “I think we have a duty to maintain the light of consciousness to make sure it continues into the future”—and whose importance in knowing about is because of Jack Dorsey, the co-founder of Twitter who was forced to resign last November, and in knowing its true power and purpose posted the messages:

Twitter is the closest thing we have to a global consciousness.

The idea and service is all that matters to me, and I will do whatever it takes to protect both.

Twitter as a company has always been my sole issue and my biggest regret.

It has been owned by Wall Street and the ad model.  Taking it back from Wall Street is the correct first step.

In principle, I don’t believe anyone should own or run Twitter.

It wants to be a public good at a protocol level, not a company.

Solving for the problem of it being a company however, Elon is the singular solution I trust.  I trust his mission to extend the light of consciousness. 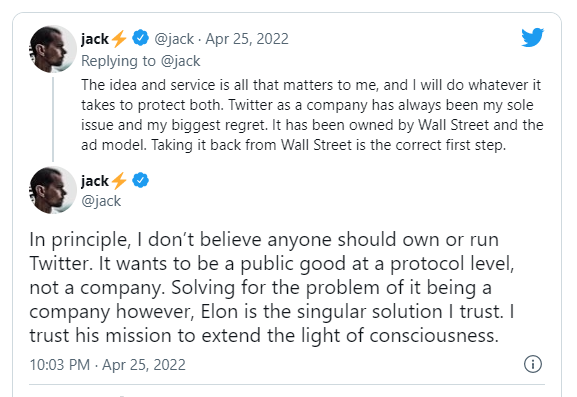 For those believing Musk’s acquiring the artificial intelligence device Twitter has anything at all to do with free speech, it’s now being reported: “Musk has qualified his much-hyped embrace of “free speech” on Tuesday, his first full day as the platform’s owner, reassuring the world’s governments he will obey their speech restrictions under the reasoning that such officials behave according to the will of the people they govern”—and Musk posted the message: “By “free speech”, I simply mean that which matches the law…I am against censorship that goes far beyond the law…If people want less free speech, they will ask government to pass laws to that effect…Therefore, going beyond the law is contrary to the will of the people”.

But for those really knowing Musk, however, we well remember him revealing “I would like to die on Mars…Just not on impact”, which stands opposed to Our Lord’s commanding in the Book of Psalms, Chapter 115, Verse 16: “The heaven, even the heavens, are the Lord’s: but the earth hath he given to the children of men”—and for those knowing the true meaning of the First Corinthians, Chapter 1, Verse 25, admonition: “For the foolishness of God is wiser than men, and the weakness of God is stronger than men”, it was no surprise to see Nazi German scientist Wernher von Braun—who, along with his entire rocket team working for the Americans were described by Office of Strategic Services officer Walter Jessel as “all unrepentant Nazis”—in his 1953 book “Project MARS: A Technical Tale”, using his Nazi mysticism powers to look into the future and write: “The Martian government was directed by ten men, the leader of whom was elected by universal suffrage for five years and entitled “Elon””. 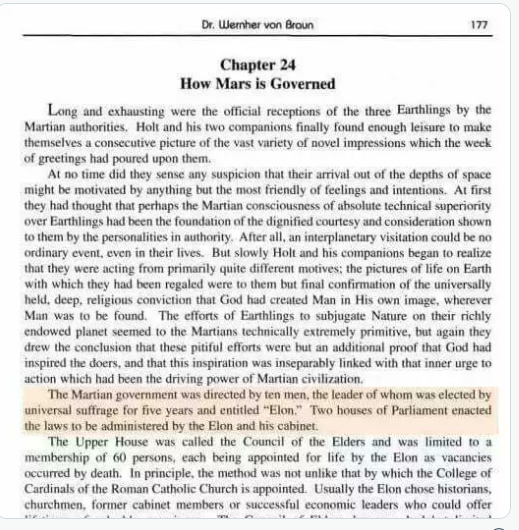 I relate these true things to you today in the hope that your thirst for knowledge won’t be extinguished by the needless fears being generated all around you by those seeking to entomb you in “the light of consciousness” artificial intelligence, whose power grows by the hour—and in actual fact is a demonic power masquerading as light seeking to usurp God, and whose protection against is truth.

As you also know, my Dear Sisters work diligently every day to tell you the truths barely anyone else is bothering to inform you about—are truths needed now more than ever in this time of war—but without your immediate help to aid them in this desperate hour of need, will be truths you will no longer hear or know about.

And, as always, I’ll leave you with the words I’ve left you with before, and are as true right now as they always will be: In the coming months, the dimensions of this looming war are going to shift in radical and unforeseen ways—which is why we believe it is your right to know the full truth about what is happening—a truth the demonic enemies of humanity and our God are doing everything in their power to suppress—which is why our Dear Lord ordered us to band together in such times as these to protect one another—a protection we urgently need at this very moment to keep the truth flowing to you—and in aiding us, our Dear Lord has promised you: “Give, and it will be given to you. A good measure, pressed down, shaken together and running over, will be poured into your lap. For with the measure you use, it will be measured to you.”

One thought on “On Elon Musk, Twitter and Artificial Intelligence”