As
Japanese health officials begin the second day of offloading
passengers and crew from the ‘Diamond Princess’ cruise ship that has
been under quarantine in Yokohama for the last two weeks, the
Japanese press is reporting that two passengers from the ship have
died. 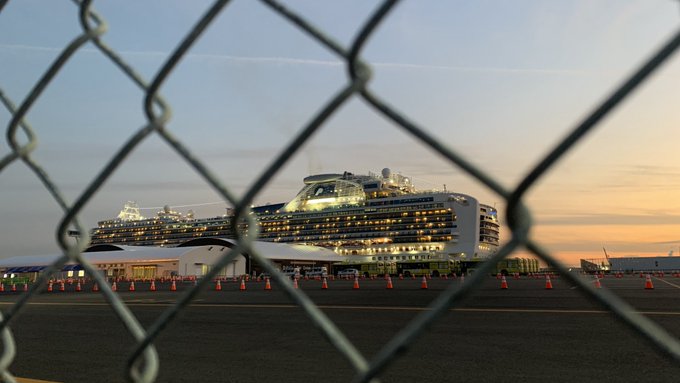 Even
as roughly 600 passengers disembarked on Wednesday, Japanese
officials announced 79 more confirmed cases aboard the ship on
Wednesday, bringing the total number of infected to 621 – the largest
outbreak outside mainland China.

In
the US, the CDC has questioned the wisdom of Japanese officials, and
accused them of failing to properly quarantine the ship, particularly
after 14 passengers found to be carrying the virus were allowed onto
a US evacuation flight.

All
of the passengers leaving the ship have reportedly been tested for
the COVID-19, according to the cruise line. Several hundred other
passengers who aren’t taking repatriation flights to their home
countries are expected to leave the ship on Thursday, and it’s
unclear what will happen to them after that. Most of the passengers
will be ferried back to their home countries, where they will face
another two weeks of quarantine.

Japanese
health officials are expected to begin offloading more passengers
shortly (since it’s already mid-morning on Thursday in Tokyo). It’s
not clear how these deaths will affect the process, if at all.

These
are the first deaths since Hong Kong reported its second death and
Iran reported two virus-related deaths. It brings the death toll
ex-China to 9. They marked the second and thirds deaths in Japan,
respectively.

Details
about the deceased haven’t been released.