I can’t in all good conscience remain with a bank that steals people’s money.

I have taken the first step – I have withdrawn my funds.

If you wish to use this opportunity to throw me some funds please do so in the next few days.

Last month, Paypal announced they would start fining their clients upwards of $2500 if, in Paypal’s sole discretion, the client engaged in “Misinformation.”  So many customers closed their accounts, Paypal’s stock price sunk and the company announced it was all a mistake and they weren’t doing it.  Today we find, the $2500 penalty is back!

The screen shot below is taken from Paypal’s Terms of Service located HERE: 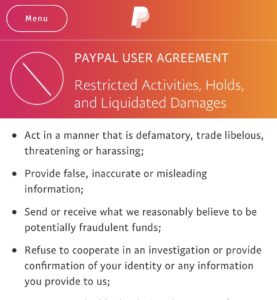 The Acceptable use Policy makes clear, the following can cost you $2500: 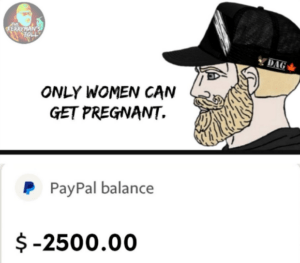 Or maybe something on your own web site that says something like this: 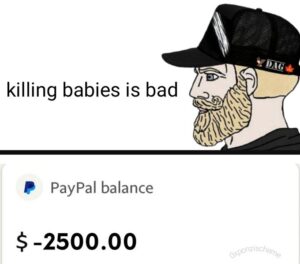 Now, many people think “they can’t do that.”

Yes, they can . . .  but only if YOU AGREE TO IT.   And you are deemed to automatically agree to it if you continue to keep and use your Paypal account!

They can grab the money and you can’t even sue them over it, because you agreed that such decisions are based on THEIR sole discretion, and you continued to have and use the account.

So it seems to many people, the only legal way to avoid suffering this arbitrary $2500 penalty, is to CLOSE your Paypal Account.

That’s what many, many people did last month when this issue first became public.   So many customers of Paypal closed their accounts, that the company began offering people a whopping fifteen dollars ($15) if they would keep the account open.

When that didn’t work, Paypal announced that this whole issue was a mistake, they weren’t going to do it.

Now, a couple weeks later, when the deluge of customers quitting has stopped . . .  here it is again!

What does that tell you about the integrity of Paypal?  Here is what some people are saying:

@PayPal reinstated their $2,500 fine. They lied to ALL of us. They are frauds. Time to ditch them if you haven’t already.

Remember, if you simply leave your Paypal account open, you are CONSENTING to them being able to penalize you $2500 each time you do or say something which, in THEIR sole discretion, violates THEIR policy.

If you have a Paypal account, many people think that closing it is the right move

One thought on “Paypal $2500 Fine for “Misinformation” Is back!”