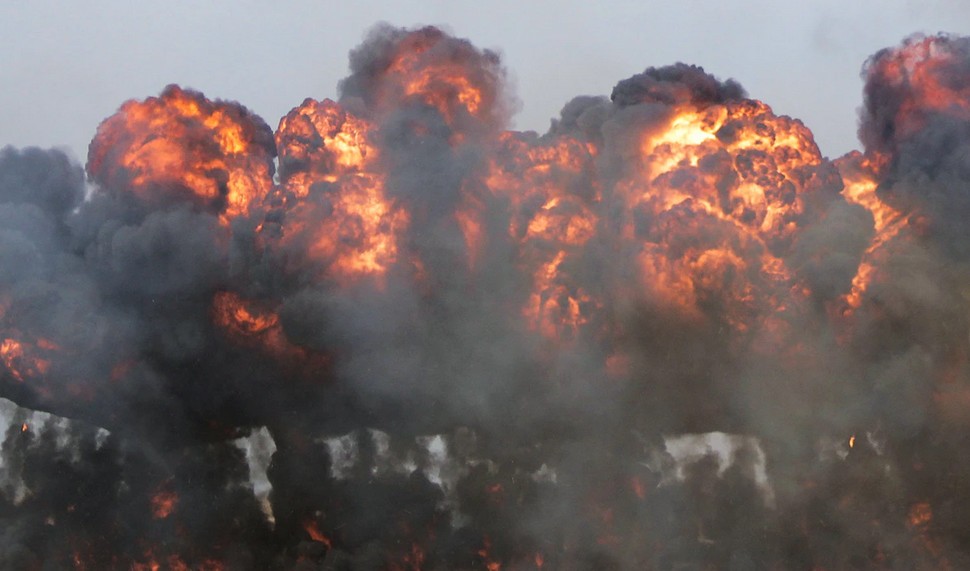 by Pepe Escobar and cross-posted with Strategic Culture Foundation

It’s not by accident that the Hegemon is going no holds barred to harass and try to smash Eurasian integration by all means available.

It’s a scorpion battle inside a vortex of distorted mirrors inside a circus. So let’s start with the mirrors in the circus.

The non-entity that passes for Ukrainian Foreign Minister traveled to Brussels to be courted by US Secretary of State Blinken and NATO secretary-general Stoltenberg.

At best, that’s circus shadowplay. Much more than NATO advisers in a frantic revolving door in Kiev, the real shadowplay is MI6 actually working very close with President Zelensky.

Zelensky’s warmongering script comes directly from MI6’s Richard Moore. Russian intel is very much aware of all the fine print. Glimpses were even carefully leaked to a TV special on the Rossiya 1 channel.

I confirmed it with diplomatic sources in Brussels. British media also got wind of it – but obviously was told to further distort the mirrors, blaming everything on, what else, “Russian aggression”.

German intel is practically non-existent in Kiev. Those NATO advisers remain legion. Yet no one talks about the explosive MI6 connection.

Careless whispers in Brussels corridors swear that MI6 actually believes that in the case of a volcanic but as it stands still preventable hot war with Russia, continental Europe would burn and Brexitland would be spared.

Dream on. Now back to the circus.

Both Little Blinken and NATO straw man Stoltenberg parroted the same script in Brussels after talking to the Ukrainian Foreign Minister.

That was part of a NATO “special meeting” on Ukraine – where some Eurocrat must have told a bunch of extra clueless Eurocrats how they would be carbonized on the spot by Russian TOS-1 Buratino’s terrifying explosive warheads if NATO tried anything funny.

Listen to the sound of Blinken yappin’: Russian actions are “provocative”.

Well, his staff certainly did not hand him a copy of Russian Defense Minister Sergei Shoigu examining step by step the deployment of the annual US Army DEFENDER-Europe 21: “The main forces are concentrated in the Black Sea and Baltic region.”

Now listen to the sound of Stoltenberg yappin’: We pledge “unwavering support” to Ukraine.

Woof woof. Now go back to play in your sandboxes.

No, not yet. Little Blinken threatened Moscow with “consequences” whatever happens in Ukraine.

Kremlin spokesman Dmitri Peskov’s infinite patience is nearly Daoist. Sun Tzu’s Art of War, by the way, is a Daoist masterpiece. Peskov’s answer to Blinken: “It is simply not necessary for us to go around forever proclaiming: ‘I am the greatest!’ The more one does this sort of thing, in fact, the more people doubt it…”

When in doubt, call the irreplaceable Andrei Martyanov – who always tells it like it is. The Crash Test Dummy gang in D.C. still does not get it – although some Deep State pros do.

As I am on record constantly – the United States never fought a war with its Command and Control system under the relentless sustained fire impact and its rear attacked and disorganized. Conventionally, the United States cannot win against Russia in Europe, at least Eastern part of it and Biden Admin better wake up to the reality that it may, indeed, not survive any kind of escalation and, in fact, modern Kalibrs, 3M14Ms, as a matter of fact, have a range of a 4,500 kilometers, as well as 5,000+ kilometer range of X-101 cruise missiles, which will have no issues with penetrating North American airspace when launched by Russia’s strategic bombers without even leaving the safety of Russia’s airspace.

The circus went on with the phone call from “Biden” – that is, Crash Test Dummy with an earpiece and a teleprompter in front of the phone – to President Putin.

Call it the Patrushev effect.

In his stunning interview to Kommersant, Triple Yoda Patrushev mentioned a very civilized late March phone call he had with US National Security Adviser Jake Sullivan. Of course there’s no smokin’ gun, but if anyone would come up with the face-saving idea of a Biden-Putin phone call that would have been Sullivan.

The spin from Washington and Moscow is only slightly divergent. The Americans highlight that “Biden” – actually the deciding combo behind him – wants to build “a stable and predictable relationship with Russia, consistent with US interests.”

Away from all this fog, what really matters is Patrushev-Sullivan. That has to do with Washington telling Turkey that US warships would be transiting the Bosphorus towards the Black Sea. Sullivan must have told Patrushev that no, they won’t be “active” in Donbass. And Patrushev told Sullivan, OK, we won’t incinerate them.

There are absolutely no illusions in Moscow that this putative Biden-Putin summit in a distant future will ever take place. Especially after Daoist Peskov had made it very clear that “no one will allow America to speak with Russia from a position of strength.” If that sounds like a line straight out of Yang Jiechi – who made shark fin’s soup out of Blinken-Sullivan in Alaska – that’s because it does.

Kiev, predictably, remains stuck in circus mode. After getting sharp messages from Mr. Iskander, Mr. Khinzal and Mr. Buratino, they changed their mind, or at least pretend to, and are now saying they don’t want war.

And here comes the intersection between circus and the serious stuff. The “Biden” combo never said, explicitly, on the record, that they don’t want war. On the contrary: they are sending those warships to the Black Sea and – circus again! – designating an envoy, Ministry of Silly Walks-style, whose only job is to derail the Nord Stream 2 pipeline.

So the cliffhanger – like a teaser for Snowpiercer – is what happens when Nord Stream 2 is completed.

But before that, there’s something even more momentous: next Wednesday, on his speech to the Russian Security Council, President Putin will lay down the law.

Russian Deputy Foreign Minister, Sergei Ryabkov, has struck a much less Daoist note than Peskov: “The United States is our enemy, doing everything to undermine Russia’s position in the international arena, we do not see other elements in their approach to us. These are our conclusions”.

That’s stone to the bone realpolitik. Ryabkov knows the Hegemon’s “non agreement-capable” mindset inside out. So an added dimension to his observation is its direct connection to the only solution for Ukraine: the Minsk 2 agreements.

Putin reiterated Minsk 2 on his live teleconference with Merkel and Macron – and certainly to “Biden” in their phone call. The Beltway, the EU and NATO are all aware of it. Minsk 2 was signed by Ukraine, France and Germany and certified by the UN Security Council. If Kiev violates it, Russia – as a member of the UNSC – must enforce it.

Kiev has been violating Minsk 2 for months now; it refuses to implement it. As a faithful Hegemon satrapy, they are also not “agreement-capable”. Yet now they are seeing the – firepower – writing on the wall if they as much as think of starting a blitzkrieg against Donbass.

The open secret in the whole Ukraine/Donbass wilderness of mirrors under the circus tent is of course China. Yet Ukraine, in a sane world, would not only be part of a Belt and Road Initiative (BRI) corridor, but also part of the Russian Greater Eurasia project. China specialist Nikolai Vavilov recognizes the importance of BRI, but is also certain Russia is above all defending its own interests.

Ideally, Ukraine/Donbass would be inserted in the overall revival of the Silk Roads – as in internal Central Eurasian trade based and developed taking into consideration Eurasia-wide demand. Eurasia integration – in both the Chinese and Russian vision – are all about interconnected economies via inter-regional trade.

So it’s not by accident that the Hegemon – on the verge of becoming an irrelevant player across Eurasia – is going no holds barred to harass and try to smash the continental integration by all means available.

In this context, manipulating a failed state to meet its own doom is just (circus) business.