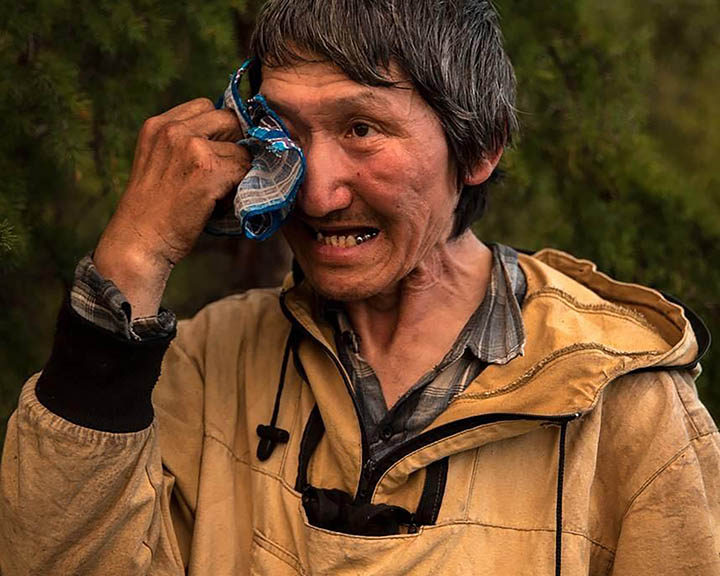 Lena Pillars, a World Heritage Site, hit by the rampant flames, as calls grow for greater efforts to tackle infernos.

Tourists saw for themselves flames and smoke from the territory of the Lena Pillars Nature Park, a World Heritage site famed for unique ancient rock formations and pristine flora and fauna.

Wildfires on permafrost are ravaging Yakutia – or the Sakha Republic, the largest and coldest entity of the Russian Federation. The scale is mesmerising.

There are some separate 300 fires, now covering 12,140 square kilometres – but only around half of these are being tackled, because they pose a threat to people.

The rest are burning unchecked, with some of the world’s most remote wilderness destroyed by uncontrolled fires.

The savage summer fire season has seen major outbreaks around the Road of Bones, an arterial highway built by victims of repression in the Soviet era between Yakutsk – the regional capital and coldest city in the world – and the port of Magadan.

Video filmed on the “Road of Bones” – an arterial highway between Yakutsk and the port of Magadan.

A powerful video taken from a cruise boat on the region’s largest river, the Lena, highlighted the frightening scale of the fires.

Tourists saw for themselves flames and smoke from the territory of the Lena Pillars Nature Park, a World Heritage site famed for unique ancient rock formations and pristine flora and fauna.

Here, as in other areas of Yakutia, artificial rain was triggered by an Antonov-26 cloud-spiking plane.

This caused rain which gave the exhausted firefighters a chance to hold back the carnage amid swampy and mountainous terrain.

Across Yakutia on 12 July, some 2,701 people and 323 pieces of equipment were involved in extinguishing the wildfires.

Ksenia Sobchak – a television presenter and former presidential election candidate, whose father Anatoly Sobchak was mentor to Vladimir Putin, spoke of her distress at the fires in this region of Siberia.

‘People are suffocating, birds and animals are dying,’ she posted.

‘It is impossible not to cry seeing the videos I receive.’

She asked: ‘Cannot this problem of wildfires be solved in the 21st century?

‘Is it harder than exploring  space?

‘It is awful to watch what’s happening in Yakutia.’

A powerful video taken from a cruise boat on the region’s largest river, the Lena, highlighted the frightening scale of the fires.

People from the region are also seeking to focus world attention on an area almost the same size as India.

Blogger and activist Roza Dyachkovskaya along with many Yakutians reached actor and environmentalist Leo DiCaprio who told her: ‘I have heard you.

‘I and my management will look into it then we will talk with the authorities in charge to see how we can be of help.’

She had told him: ‘Siberia is dying now. All Siberia hopes for your help.

‘Can you post on your official page about the fires in Siberia please.’

Blogger and activist Roza Dyachkovskaya showed the message exchange between her and Leonardo DiCaprio. Picture: @rozali_bangkok

Many locals say that only by attracting worldwide attention will Russian officials devote full resources to tackling the wildfires which threaten both settlements and the Siberian wildlife.

There was anger last week, for example, when a Russian BE-200 amphibious aircraft was sent to Turkey rather than Yakutia to extinguish the flames.

An Antonov plane was used to spike the clouds and ‘make rain’ in the Lena Pillars Nature Park, acknowledged the sanctuary’s director Arkady Semyonov.

‘We were certainly helped by the rain caused by the operation of the spiking aircraft,’ he said.

‘However, the amount of work done by the (firefighters) at the burning edge was simply enormous.

‘All edging work on all the fires was done by hand and is very valuable.

‘I am sure we will soon defeat this natural element.’

An Antonov plane was used to spike the clouds and ‘make rain’ in the Lena Pillars Nature Park.

He said this year’s summer fire season was worse than 2020.

‘There were fires in the park in previous years, but now the situation is more complicated,’ he said when the burning was at full scale.

‘Even 200 people is not enough to tackle it.

‘This year, there has been unprecedented heat and drought, with almost all fires caused by thunderstorms.

‘And this is the situation practically throughout (Yakutia).’

In Yakutsk, the city has faced choking smoke pollution this month, as have many settlements in the region.

Firefighters from the federal reserve including paratroopers have been flown in from  the regions of Irkutsk, Khabarovsk and Trans-Baikal, as well as the republic of Tyva.

Experts say that overall the fires in Yakutia are less destructive than a year ago: however, they are further south, nearer the main areas of population.

Evgeny Ponomarev, associate professor at the Siberian Federal University, and senior researcher at the Sukachev Institute of Forest , said: ’Most of the areas of fires in 2021 fall in the zone of 60–65° N.

’In 2020, the greatest damage was recorded in the zone of 65–70° N. So the extreme movement of fires to the north of the region has not yet been repeated.

Yet some roasting temperatures have been recorded in the Arctic, as high as 39C, more like Dubai, and wildfires have been a significant problem.

This is in a region where winter temperatures can drop below minus 60C.

Russia’s average June temperature this year was 3C hotter than normal, according to the St. Petersburg-based Voeikov Main Geophysical Observatory.

Yakutia faced the hottest June in its recorded history, with temperatures up to 4.5C warmer than expected.

However, the pattern was not uniform across the region.

Russia is reported to be warming 2.5 times faster than the planet as a whole, a particular danger in Yakutia where greenhouse gases locked in permafrost are now escaping as the soil thaws due to heat – and wildfires.

Currently Russia has a total of 550 wildfires, meaning that more than half are in one region – Yakutia.