According to him, in case of strengthening NATO in the neighboring countries of Ukraine, Russia will take additional measures to ensure its security.
Песков ответил на планы США защитить Украину от «российской агрессии» 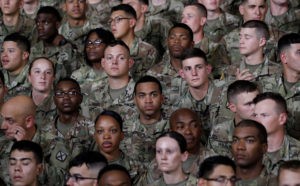 This is how he responded to US statements that “in the event of an escalation, the country will not leave Ukraine alone with the enemy and will not allow the implementation of Russia’s aggressive aspirations.” Peskov also responded to the statement of Kiev, which, in turn, proposed to increase the combat readiness of NATO troops around Ukraine.

“Undoubtedly, such a development of the scenario would lead to a further increase in tensions near the Russian borders. And, of course, this will require additional measures from the Russian side to ensure its security, ”said Peskov (quoted by TASS ).

When asked what additional measures may be required in this case, the spokesman replied that “all that are necessary.”

At the end of March, The New York Times reported about the pulling together of 4 thousand Russian troops to the border with Ukraine. The Pentagon said they had received relevant messages and are now discussing tension in eastern Ukraine with partners in the alliance. On April 1, the commander-in-chief of the Ukrainian army, Ruslan Khomchak, announced that Russia was increasing the presence of troops near the border in the Rostov, Bryansk, Voronezh regions and in the Crimea. According to him, as of March 30, 28 battalion tactical groups of the Russian army were deployed along the border near Donbass.

Peskov, in response to this information, stated that the movement of Russian troops across the territory of his country should not bother other states, since it does not threaten them in any way. “The Russian Federation moves its armed forces within its territory at its own discretion,” he said. The Russian Ministry of Defense later explained that the movement of military equipment to Crimea is related to the planned training activities of the Southern Military District (YuVO).

On April 2, Russian Deputy Foreign Minister Andrei Rudenko said that talk about a possible impending conflict is just another fiction. According to him, Russia is not interested in any conflict with Ukraine, let alone a military one.