Casey Hodgkinson and her mother Anna, sat down with our reporter Carina Ruiz, to debrief after her first public speech at a recent freedom rally in Auckland.

The mainstream media attended but still refuse to acknowledge Casey’s story & Auckland businessman and mayoral hopeful had no issue gatecrashing her first public address. We’ll have more on this coming up in our next full episode.

Despite being severely injured by the Pfizer vaxxine, Casey Hodgkinson still insists on love being the answer. She remains positive in the face of adversity and refuses to let her struggles get the better of her.

Breaking news: As we went to air we got the confirmation that a coroner has confirmed young NZ man Rory Nairn died, with no other underlying health conditions, due to myocarditis after having had the Pfizer jab 12 Days earlier.

The distain & contempt for the the NZ government, the MSM, the medical establishment & other agencies can no longer be suppressed.

The reasons for these feelings become very blatant when one sees, brave, young, Casey Hodgkinson as she makes her first public speech at a recent freedom rally, which was hijacked by local jab & segregation advocate, Leo Molloy.

Kelvyn & Hannah offer their commentary on Leo’s intrusive speech, the way the media handled it and the huge cover-up that is taking place in regards to the biggest story in NZ. 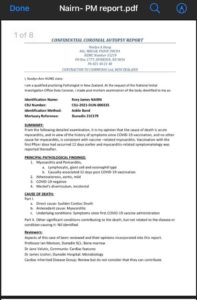 This is a follow up to my post about New Zealander Ashleigh Wilson’s fiancée, Rory James, who had heart palpitations for several days, after the COVID vaccine, before collapsing to the floor of his Dunedin home in New Zealand on November 17.

Here’s the Autopsy report by Noelyn A. Hung. Hung is Patholigist in Dunedin, New Zealand.

The ruling is that Rory died from myocarditis and pericarditis as a result of the COVID vaccine.

Note that a professor and two doctors reviewed the report before it was released.

One thought on “Pfizer Carnage Continues in NZ”