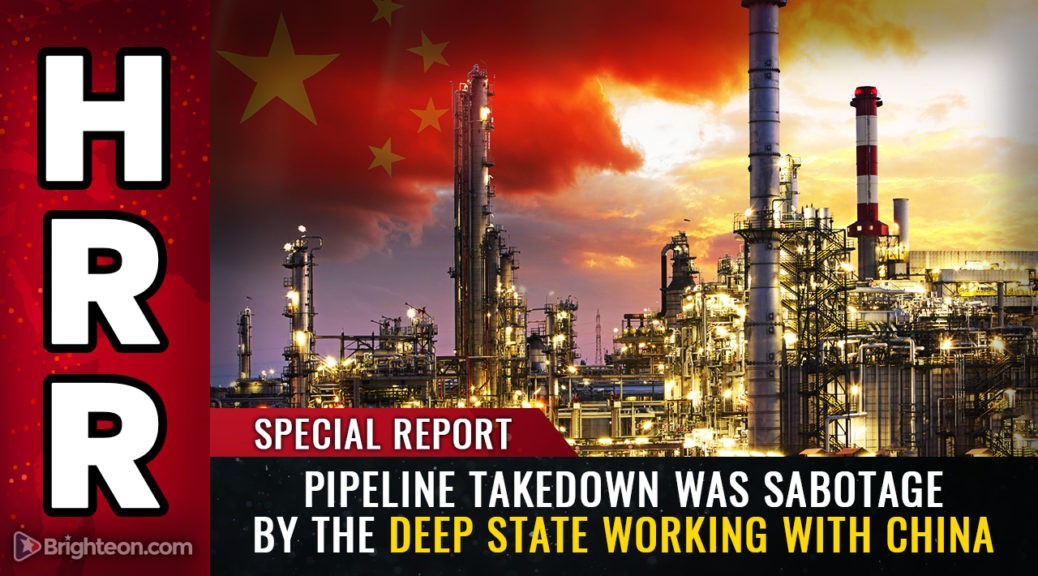 I have come across an RT report of the head of Kaspersky Labs who also has suspicions of a US Deep State operation behind this.

Holding tanks are seen in an aerial photograph at Colonial Pipeline’s Charlotte Tank Farm in Charlotte, North Carolina, U.S. May 10, 2021. ©  REUTERS / Drone Base

The goal is clear: The systematic dismantling of the United States of America, plunging it into chaos and collapse, all while invoking race wars, mass starvation, political unrest and widespread disease.

The pipeline takedown has thrust over 10,000 gas stations into gasoline outages, and this emergency is already interfering with trucking and truck deliveries of food, lumber and industrial materials.

It’s also showing the shocking vulnerability of America’s computer-controlled infrastructure, because if a critical pipeline can be taken down so quickly due to remote sabotage, what other components of the U.S. infrastructure are already compromised and ready to be taken offline at a moment’s notice?

The answer is terrifying: It turns out that most of America’s power grid, banking institutions, energy sector operators and telecom providers are exposed to the internet and subject to being compromised. It also seems that anti-American globalists are already hinting at a coming grid down scenario that many believe will strike the United States this summer, turning into rolling blackouts that will impact many regions, further accelerating the economic destruction of America.

Today’s Situation Update podcast is an urgent call to remove yourself from the grid as much as possible. Become self-reliant. Get redundant. Learn to survive without electricity. Because the power grid is targeted for the next takedown:

Here’s a 14-minute special report podcast offering a more in-depth analysis of the Colonial Pipeline takedown and what it means for the war on America:

Pipeline panic is preview of CYBER TAKEDOWN of U.S. infrastructure
More than 15,000 gas stations ran out of fuel in just a few days after Colonial Pipeline cyberattack: Are you prepared for the “big one?”
How to outsmart the doomed DEATH CULT masses who now surround us
Democrats’ plan to destroy Trump-voting Middle America proceeds as small businesses close because workers making more on govt. handouts
The refinery shutdowns have begun: Two refineries paused due to pipeline cyber hack as America’s energy infrastructure shows shocking vulnerabilities
This is NOT a drill: Countdown to mass FAMINE has begun, and people you know will starve and die
Cyber-attack forces top U.S. fuel pipeline to shutter its entire network… are globalists behind the sabotage?
California’s anti-gun Marxists are considering softening gun crime laws because more “persons of color” are violating them
Gasoline supplies COLLAPSE across southern states as cyber hack of pipeline wreaks regional economic havoc
Sidney Powell: America is now a ‘Communist regime’