NATURAL GAS TO POLAND IS NOW SHUT OFF! UPDATE: Bulgaria Too!

Russian gas supplies to Poland via the Yamal-Europe gas pipeline WERE HALTED April 26.  Poland is now no longer receiving __any__ natural gas from Russia.  The country is expected to run out of natural gas within one week, shutting down electric generating plants, industry, and heat/electric for private homes.

This shut down took place because last Friday, the deadline for paying for energy resources in rubles – expired.

Gazprom has suspended gas supplies to Poland. At the Kondratki entry point, the transmission level dropped to 0 kWh. 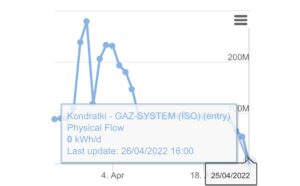 Now confirmed: Polish PGNiG says it has received a note from Russia’s Gazprom informing them that starting from April 27, 8:00am local time, gas supplies from Russia to Poland under the Yamal Contract are completely suspended.

If Poland isn’t getting any gas, then neither is Germany; that’s the way the pipeline runs. Nordstream 2 is not on line, so if Poland is cut off, the only way to supply Germany is blocked, also.

As such, we should hear screams from Germany any hour now.

Update(1550ET): The International Energy Agency (IEA) issued a statement of solidarity with Poland as Russia is poised to suspend all natural gas supplies to the country over Warsaw’s refusal to settle payments in Rubles, as President Putin previously demanded of “unfriendly countries” taking anti-Kremlin action amid the Ukraine conflict.

“Gazprom’s move to completely shut off gas supplies to Poland is yet another sign of Russia’s politicization of existing agreements and will only accelerate European efforts to move away from Russian energy supplies,” IEA executive director Fatih Birol said in a statement posted to social media.

This following on the heels of Polish Climate Minister Anna Moskwa, who oversees coordination of the country’s energy needs and response to changing conditions, asserting that Poland is well prepared for such a scenario of Russia cutting off the taps…

“Poland has the necessary gas reserves and sources of supply that protect our security – we have been effectively independent from Russia for years. Our warehouses are 76% full. There will be no shortage of gas in Polish homes,” she stressed. Meanwhile Gazprom has confirmed that by tomorrow the supplies will be halted, after already the Yamal-Europe pipeline reportedly stopped delivering, and also this…

Update(1340ET): Following initial reports from Poland’s largest news portal Onet that Russian natural gas delivery to Poland had been suspended, Gazprom denied that it had at this point stopped flows. However, it quickly said that it will halt gas deliveries starting tomorrow. But at this point gas from Russia is not flowing via the Yamal pipeline, disrupting delivery to Germany…

After the initial reports, which sent European gas princes exploding, Poland has confirmed that a suspension of gas is imminent if it doesn’t agree to pay in Rubles. Bloomberg is now reporting, “Poland’s main gas distributor PGNiG says it was informed by Gazprom that starting from Wednesday at CET0800 all deliveries of natural gas will be halted.”

And further, “PGNiG says will seek damages over breach of contract.” The news comes after a reported crisis meeting of Poland’s Climate Ministry. Now it appears some final decisions must be made amid the ultimatum from Moscow.

A flurry of breaking headlines…

Poland prepares to be cut off from Russian hydrocarbons pic.twitter.com/wxiu8b1n9J

Update(1241ET): Gazprom has said it did not suspend natural gas flows to Poland, but issued an ultimatum stipulating that Poland must pay in Rubles “today” based on what was previously laid out by Putin, namely that “unfriendly countries” must now pay for its supplies in the Russian currency.

BREAKING: Poland sanctions 50 Russian firms and oligarchs including Gazprom. Russia has reportedly suspended gas supplies to Poland over its refusal to pay in rubles.

Update(11:42ET): And there it is – Reuters news wire is reporting that Russia halted natural gas supplies to Poland for Warsaw’s refusal to pay in Rubles and following repeat warnings from President Putin:

There are emerging reports that Russia has halted natural gas deliveries to Poland, albeit it initially remains unconfirmed by the Russian government at this point. 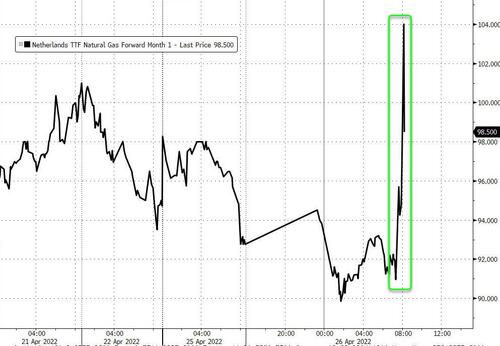 Poland’s Climate Ministry has reportedly called an emergency meeting to discuss the issue. 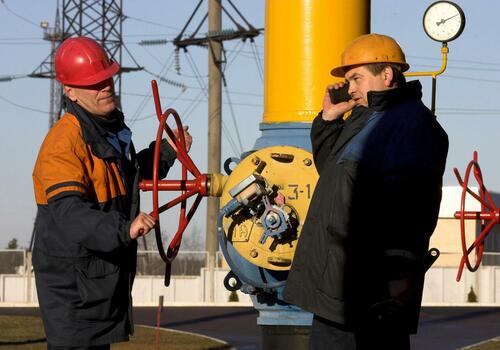 The report out of Polish national news indicates that formal government announcements are to be made later in the day, likely within hours…

Russia has suspended gas supplies to Poland under the Yamal contract, Onet has learned unofficially. A crisis team has gathered at the Ministry of Climate. There is no announcement from Russia as to whether this is the fulfillment of the ultimatum that Vladimir Putin recently threatened. Official announcements on this matter are to be released today.

A month ago as Poland took steps to wind down all Russian oil imports by end of the year, other European countries also began warning their populations on the need to conserve natural gas usage amid potential severe supply shortages.

Reports: Russians did not inform the Polish side about the reasons for the suspension of deliveries

Also potentially behind this reported halt in Russian gas is that on Monday for the first time Polish Prime Minister Mateusz Morawiecki confirmed that his country has sent tanks to Ukraine.:

“Yes,” Morawiecki said when asked if Poland had or would send tanks to Ukraine. He declined to reveal any further details including the number of tanks sent.

This follows in March Warsaw attempting to send MiG-29 jets to Ramstein Air Base for the US to deliver them to Kiev – something which the Pentagon rejected as premature and high risk.

Poland is also hosting US troops, who are lately engaged in training Ukrainian forces on advanced weaponry like drones. If these fresh reports of a gas shutoff to Poland are confirmed, it appears that Moscow has had enough.