I’m not much into predictions but the signs seem clear. In the meantime, I gather there is a strategy to turn off Trump’s microphone at the next debate if he mentions the laptops,

“I predict in the coming weeks the Democratic narrative will change from euphoria over the apparent large leads in early voting to concern that a disproportionately large number of younger voters have yet to return their mail ballots.”

Trump Vs Biden: The Race Tightens, “Suddenly Looks Like 2016”

“How will the stocks trade on various election outcomes” remains the most frequent question virtually every bank has been fielding in recent weeks. One of the best summaries of the various President/Senate permutations came from Bank of America which last week laid out “The 4 Election Scenarios For Markets, And How To Trade Them.” 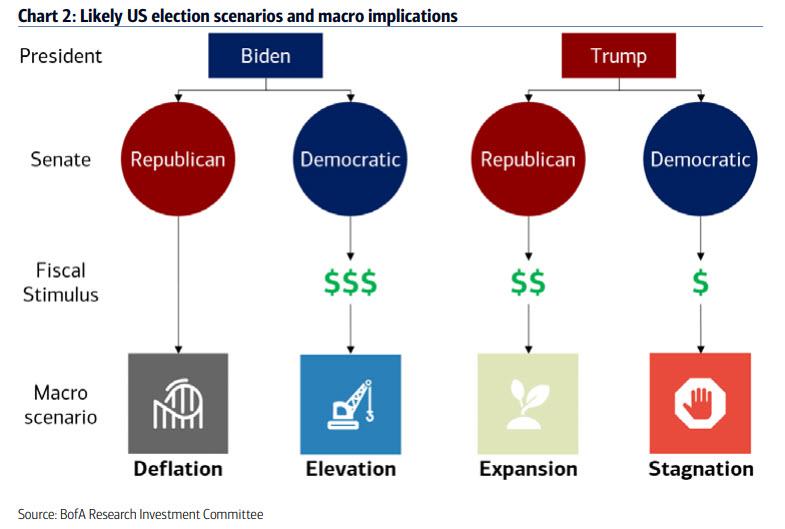 It will come as no surprise that with significantly oversampled polls (a remnant of John Podesta’s strategy which was leaked 4 years ago), a Dem Sweep appears to be the consensus outlook, although quite a few in the market still expect either a Trump win or a Republican hold of the Senate, and even if the “consensus” plays out JPMorgan warns that the 35% or so who expect a Trump win or a could still move stocks even if we get the “consensus” outcome.

Then again, and just like in 2016, the question is “which polls should one listen to”: if one goes off the same popular pollsters who got 2016 so terribly wrong, a Trump victory would be – as Deutsche Bank’s Jim Reid showed last week – the “biggest error in our modern era of mass polling.” Reid was going off the latest RCP poll average which showed Biden’s lead in various polls rise by over 10pp over the past week. Putting that lead in context, and assuming Trump ultimately prevails, the largest error was in 1948 when President Truman won by 5% in spite of being behind by 4.4% in the final polls. As such, if Trump wins, the shock would be even bigger than the historic 9.4 point upset in 1948. 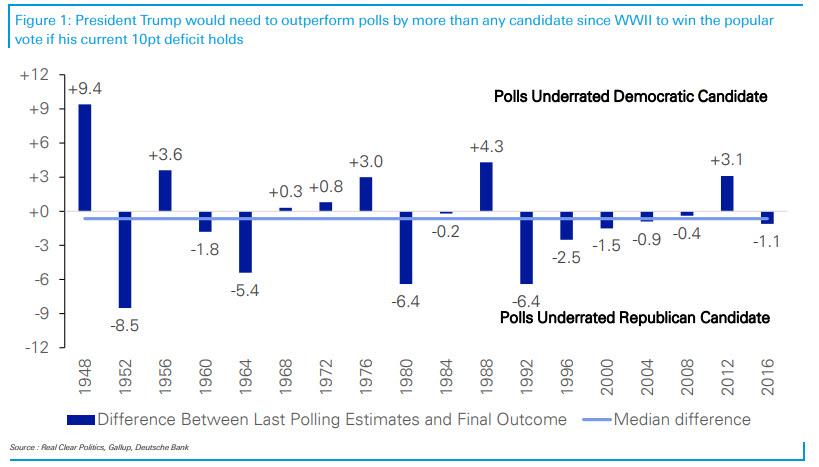 Of course, one doesn’t have to listen to the mainstream polls – which again got 2016 completely wrong – and if instead one picks a non-mainstream poll such as that from Trafalgar Group, which was one of the handful of polls to correctly predict the outcome of the Trump-Hillary race, then Trump will likely win as we reported last week. 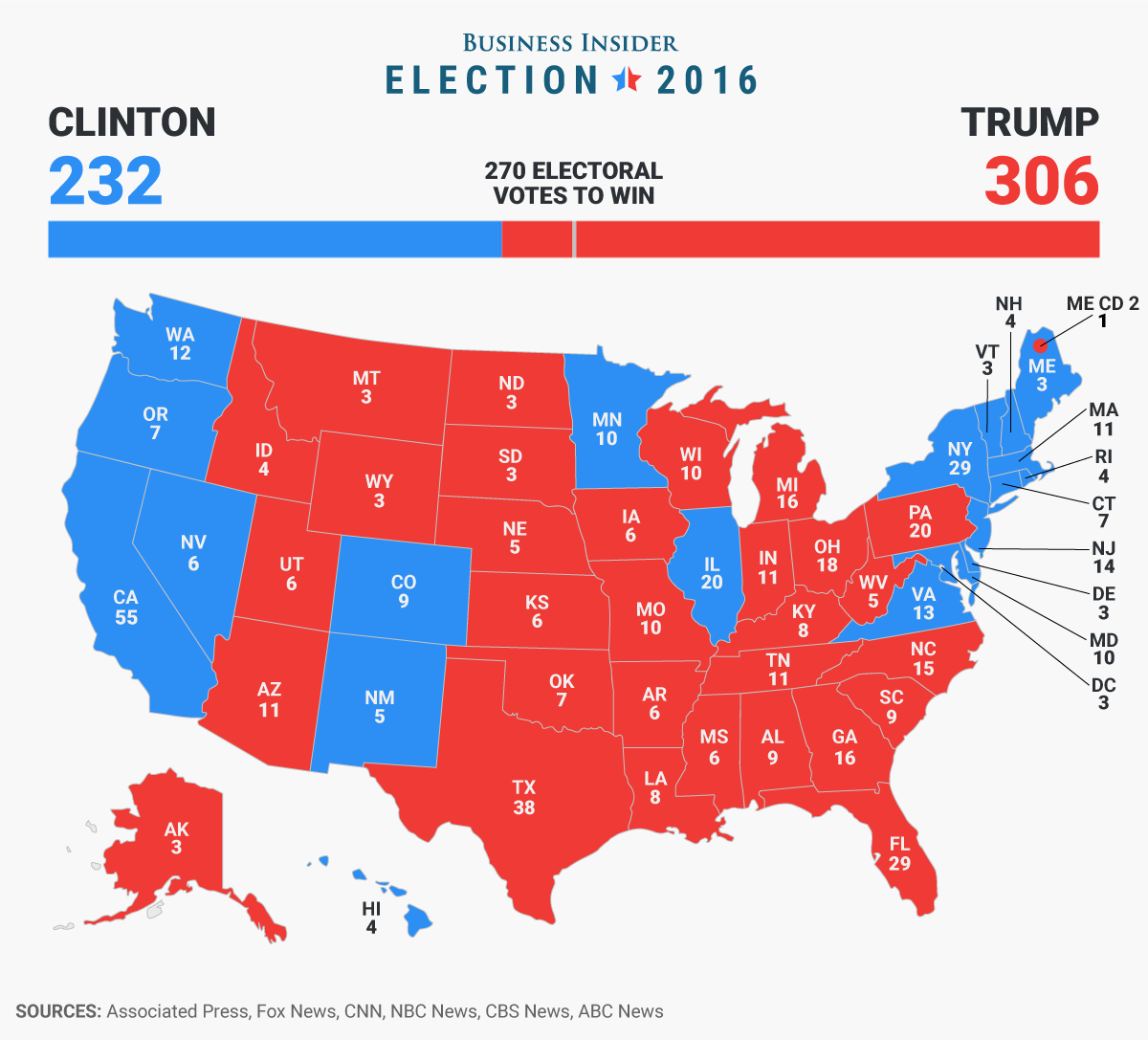 But even if one sticks to the mainstream polling, things are starting to move in Trump’s favor.

As JPMorgan writes in its Weekly Polling and Positioning report, for the first time in six weeks, Biden’s national average polling lead declined (-1.7 points), and even though Biden continues to lead polling averages in many of the swing states and saw slight gains in AZ/MI/NC/WI he slipped slipping in FL/PA, with Florida now a dead heat (although as JPM clarifies, if the election were held today, polling averages suggest Biden would win the Presidency and Democrats would gain Senate with wins in AZ, IA, ME & NC.) 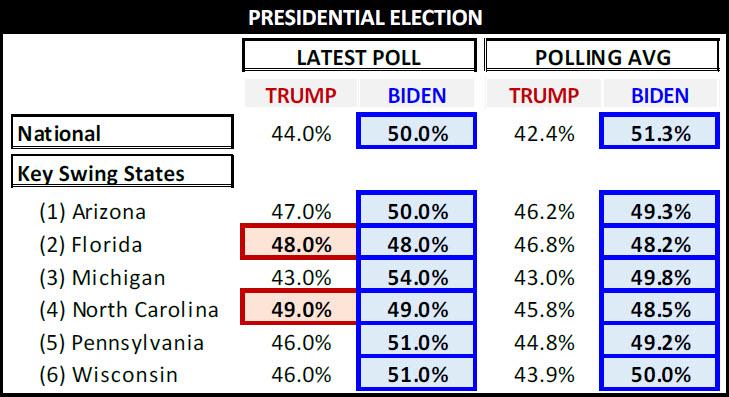 Here, however, we should point out a warning issued by another JPMorgan analyst, Marko Kolanovic, who last week had a warning for those expecting a blowout Biden victory: specifically, he found that in the past 4 years, the number of newly registered republicans in key battleground states is greater than new democrats in critical states such as PA, FL, NC and NM.

If Kolanovic’s assessment is accurate, the change in voter registration data shown above would immediately invalidate all polls such as this one from Real Clear Politics showing Biden sweeping across the Battleground states. In fact, while he does not say it, the implication from the Kolanovic analysis is that Trump may well end up winning the critical trio of Pennsylvania (20 Electoral votes), Florida (29 votes) and North Carolina (15 votes).  That said, even the RCP average show that Trump’s approval in battleground states is now approaching the highest it has been since the start of August. 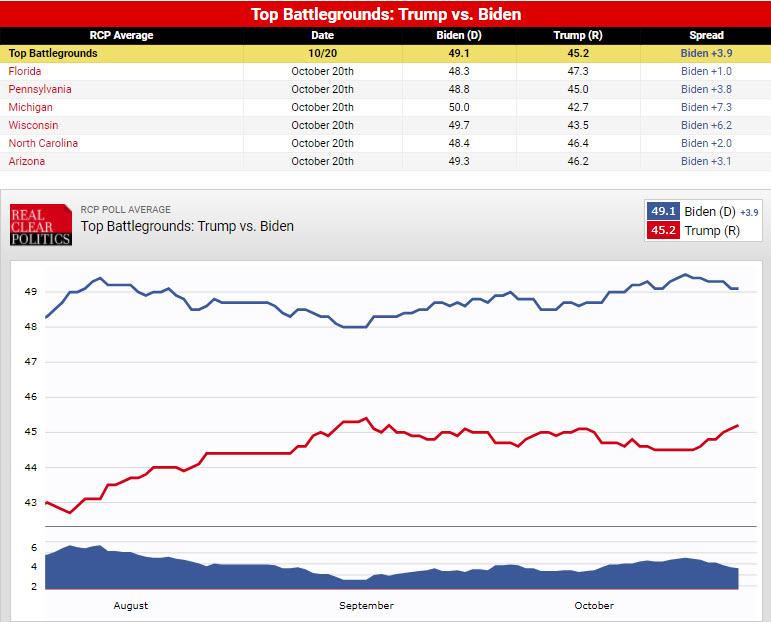 Then, in yet another report from JPMorgan published today, the bank’s quant Nick Panigirtzoglou writes that “while it is perhaps true that during the first two weeks of October risk markets were supported by a widening of US presidential odds, which by itself implied a lower probability of a close or contested US election result, over the past week or so these odds have started narrowing again.“

But where things get really interesting is if one looks at the latest just released Investor’s Business Daily poll – which alongside Trafalgar also correctly predicted the outcome of the 2016 election – we learn that the race between Trump and Biden has “suddenly gotten much tighter” as IBD/TIPP’s latest 2020 presidential poll update “shows that Republicans are rallying around Trump, Biden is leaking Democratic support, and the gap among independents has narrowed”, prompting IBD to conclude that the race “suddenly looks like 2016.” As a reminder, back in 2016, IBD/TIPP’s final poll numbers put Trump up by 1.6 points in a four-way race, in line with the final “shocking” outcome.

Specifically, the latest IBD/TIPP Trump vs. Biden poll showed the Democratic challenger leading the Republican incumbent by 2.3 points, 48.1%-45.8%, in a four-way presidential poll of likely voters, and within the margin of error. Libertarian candidate Jo Jorgensen has the support of 3%, and Green Party candidate Howie Hawkins 0.9%.

According to the poll, Biden’s narrower support reflects Trump’s gain, more third-party support and more voters who are undecided or decline to say whom they support.

Joe Biden’s lead among likely independent voters narrowed to a 45%-41% margin in IBD/TIPP’s latest 2020 presidential poll update. Biden’s lead had ranged from 6 points into the double digits. Meanwhile, Donald Trump is now having a much easier time corralling Republicans than Biden is having in nailing down Democratic votes. Biden leads 90%-7% among Democrats. Trump leads 94%-4% among Republicans.

Still, the latest Trump vs. Biden poll continues to highlight what could be a big problem for the president: wayward 2016 Trump voters. Among people who voted for Trump in 2016, 7% say they now support Biden while 89% say they’ll back him again. Biden does better among Hillary Clinton voters: Just 3% say they support Trump, while 95% back the former vice president. In addition to faring better among 2016 Trump and Clinton voters, Biden gets more support than Trump among 2016 third-party voters (39%-30%) and nonvoters (57%-31%).

In 2016, almost all presidential polls pointed to a Hillary Clinton victory over Donald Trump. The IBD/TIPP Poll was one of only two election polls credited with predicting President Trump’s 2016 surprise showing. TIPP, IBD’s polling partner, succeeded in picking up on the greater enthusiasm among Republicans for their candidate.

The latest IBD/TIPP Trump vs. Biden poll has some similarities with the Trump vs. Clinton race. Republicans again seem more excited about their candidate. However, Biden’s 4-point lead among independents in the IBD/TIPP 2020 election poll is one important contrast from 2016. Trump carried independents 43%-42% in 2016, according to a postelection Pew Research survey of verified voters.

Seniors and suburban voters helped lift Trump to victory in 2016. Yet the latest IBD/TIPP Trump vs. Biden poll shows the Democrat winning both groups, though his lead among seniors has slipped.

According to IBD, unless Trump reverses his weakness among those groups, he’ll need a somewhat different formula for winning in 2020. Yet events could still reshape the race. The Oct. 22 debate, a coronavirus resurgence as well as progress toward a medical breakthrough, the Supreme Court nomination fight and the fate of fiscal stimulus negotiations could all change minds during the last two weeks of the Trump vs. Biden race. Of course, the unprecedented level of mail-in voting, which brings the potential for disqualified ballots, is a wild card.

Trump’s Electoral College victory in 2016 came despite losing the popular vote by 2.1% — a hair smaller than his current 2.3-point deficit in the new IBD/TIPP presidential poll. However, no candidate has won the presidency with a bigger popular vote deficit since 1874, when Rutherford B. Hayes lost by 3%.

The IBD/TIPP poll is even more of an outlier than in 2016. The RealClearPolitics average of 2020 presidential polls shows that Biden’s lead has grown from 6.6 points before the first debate and Trump’s coronavirus case to 8.9 points currently.

Senior citizens are another key group Trump carried in 2016 that have swung toward Biden, but the gap has narrowed. Seniors back the former vice president, 48%-46%, in IBD/TIPP’s latest Trump vs. Biden poll, but his lead had been in double digits. Trump won among senior citizens in 2016, 53%-44%, Pew says.

President Trump is trying to shore up support among seniors, who are far more susceptible to the coronavirus and who have been critical of his handling of the pandemic. After his release from the hospital, Trump pledged that he would provide free access to the Regeneron Pharmaceuticals (REGN) antibody drug that he credits with restoring him to full health. The Trump administration also is getting ready to send out drug cards worth $200 to tens of millions of seniors.

Senior citizens are another key group Trump carried in 2016 that have swung toward Biden, but the gap has narrowed. Seniors back the former vice president, 48%-46%, in IBD/TIPP’s latest Trump vs. Biden poll, but his lead had been in double digits. Trump won among senior citizens in 2016, 53%-44%, Pew says.

President Trump is trying to shore up support among seniors, who are far more susceptible to the coronavirus and who have been critical of his handling of the pandemic. After his release from the hospital, Trump pledged that he would provide free access to the Regeneron Pharmaceuticals (REGN) antibody drug that he credits with restoring him to full health. The Trump administration also is getting ready to send out drug cards worth $200 to tens of millions of seniors.