This is the way all revolutions go. They eat their own children and this “warlord” will eventually go the same way.

to be the police he hates as 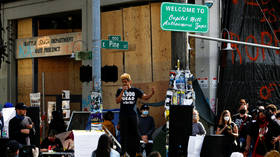 A self-styled “warlord” of the Seattle Autonomous Zone (and local rapper) is quickly learning that policing is a tough job, struggling to maintain safety and order amid the newly minted commune’s post-revolutionary hangover.

Raz Simone, self-appointed “warlord” of the Capitol Hill Autonomous Zone (CHAZ), attempted to clear up some misunderstandings about the protest community, explaining to the Post Millennial on Thursday that his only goal for the moment was “to keep the peace and unity, honestly, that’s it.” Sort of like a police officer.

EXCLUSIVE: Interview with the so-called ‘warlord’ of Seattle’s autonomous zone 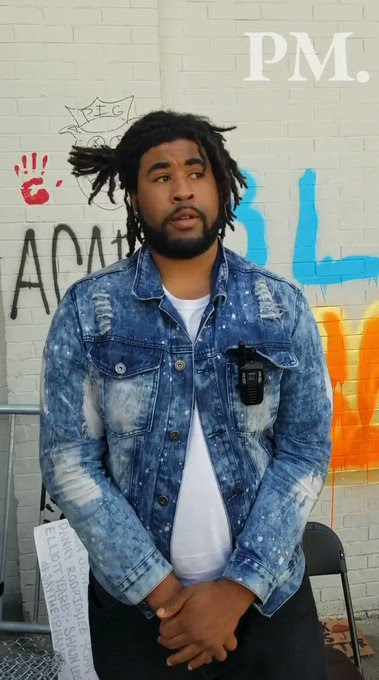 “A few different organizations have different demands, and no one speaks for everyone, but everyone’s trying to get together,” Simone clarified, implying that the much-discussed list of “demands” that have circulated for the past few days don’t represent the wishes of the entire community. However, there are a few lines of commonality running through the settlement.

“Everyone’s upset. We all came here in unity, just over the fact that cops need accountability,” he said, declaring that his decision to join the demonstration was about “trying to send a message and get accountability held.”

“Now we’re here – let’s get the dialogue going,” Simone continued, unwilling to commit to taking over other precincts, expanding the Zone, or any of the ambitious demands made by others in the group.

He had tasked himself with guarding the abandoned East Precinct, intent on stopping people from going inside and “falling into a trap of a narrative of thugs running into the building and ransacking it,” while the anarchists negotiate with the mayor. Police had left the precinct in a hurry after boarding it up on Sunday and been quickly replaced by the Zoners, who set up barricades and armed guards, and were reportedly conducting ID checks at the “borders.” Simone implied during the interview that weapons were no longer necessary because the threat had passed, referring to his empty gun holster as “symbolic.”

The #SeattleAutonomousZone is devolving into warlordism.

Rapper Raz Simone, who has been patrolling the barricades with an AK-47 and a handgun, has begun assaulting residents who disobey him.

Rapper Raz Simone, who has been patrolling the barricades with an AK-47 and a handgun, has begun assaulting residents who disobey him.

The “warlord” and a group of his fellow enforcers were seen roughing up a vandal spray-painting a building inside the zone in a widely circulated clip earlier this week. While they try to reason with the man before getting physical, attempting to convince him to respect private property, he clearly didn’t come to an Autonomous Zone to follow rules about graffiti, and it’s hard not to see some irony in the enforcers’ claim that “We are the police of this community now” – along with the subsequent violence.

Simone has been accused of pimping and domestic violence, on top of the ‘terrorism’ the entire community has been labeled with, and seems to be a polarizing figure among Seattle residents. At the same time, commune life appears to be off to a rocky start, with reports of food shortages, and social media brimming over with evidence of infighting. However, Simone has friends in unlikely places – they include white nationalist Richard Spencer

.@RazSimone I can only salute you. You instictly grasped the legitimacy crisis at the heart of America—and the White world in general—and while others pontificated, you *acted* and engaged in what can only be called “political creativity.”

Nations that are proud and strong would have crushed your revolution in the blink of an eye. But you sniffed out America’s weakness and world-weariness. You called our bluff. And for that, I have the utmost, sincerest respect.

However, Seattle police have apparently had second thoughts about abandoning their precinct and want to return, Assistant Police Chief Deanna Nollette said, during a news conference on Wednesday. The situation drew the ire of President Donald Trump, who ordered Washington Governor Jay Inslee and Seattle Mayor Jenny Durkan to “take back your city NOW” or else “I will.”

“Domestic Terrorists have taken over Seattle, run by Radical Left Democrats, of course,” the president tweeted. Seattle officials have denied the occupation is being run by Antifa. In addition to CHAZ, protesters swarmed City Hall earlier this week, threatening to impeach Durkan if she did not step down voluntarily. Protests have been ongoing in the city since the Memorial Day police killing of George Floyd in Minneapolis.

Silence in the liberal media