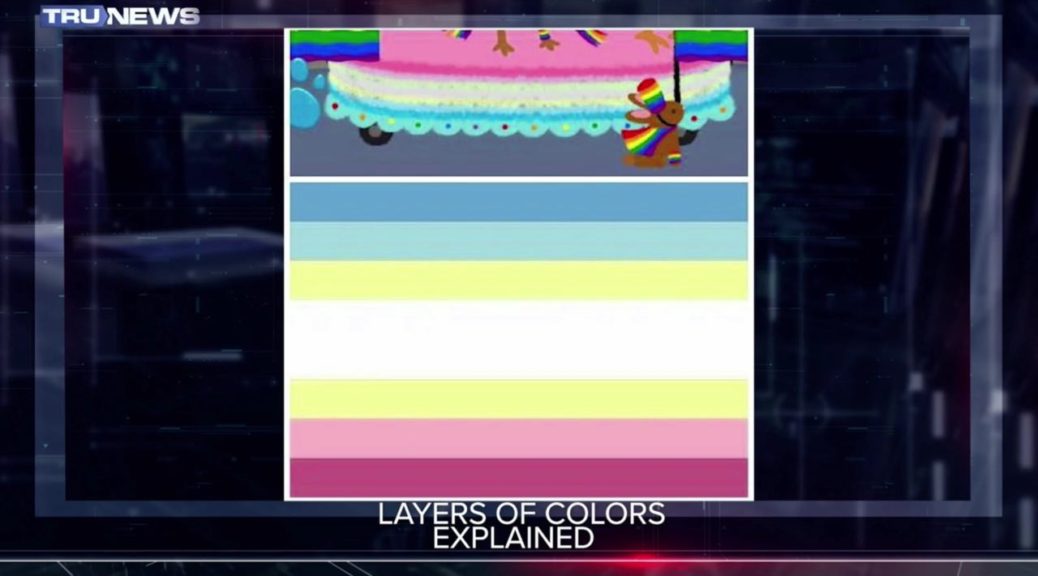 Yesterday, I wrote my book review of the novel, “Windswept House”.

As indicated, the show was run by “Witzopulos”, but, thankfully, with Doc Burkhart keeping a watch on the youngsters. 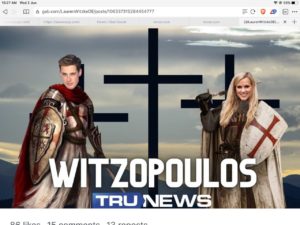 Today, watching Milo Yiannopoulos appearing on (and completely dominating TruNews) I got a new lesson in demonic depravity.

I’m not sure if you have seen it, but I have led a fairly sheltered life and have always focussed on the political and environmental spheres so that the following video, on a children’s channel aimed at preschoolers featuring a cross dresser shocked the pants off me.

I don’ t mind saying that I find Yiannopoulos quite repellant but perhaps I need someone who has been part of the Dark and by his own admission, come out the other side, to reveal the dark corners of which I would have been otherwise ignorant. He points out the hidden message of colours that appear underneath a multi-colour cake and it turns out it is all code for a pro-pedophile message embedded in a video that puts out an LBGTQ message. 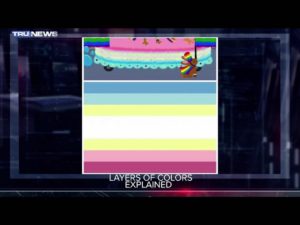 It is not difficult when pointed out to see the flag colours of MAP’s (“Minor Attracted Persons.”)

Just when you think you’re an enlightened, modern individual with your finger on the pulse of social matters, something comes out of left field and reminds you that you’re not running in mainstream anymore. I had to look deeper, realizing the context of a MAP was not by any means indicating navigation or a request for directions.

No, it’s something much more horrific than I ever anticipated. MAP is an initialism, self-created by the proud individuals it references, as “Minor Attracted Persons.”

Pedophiles. Adults sexually attracted to and aroused by minor children. This is their self identifier. MAP.

This had to sink in. It wasn’t just one post, but several, in fact, many being shared by people far more alert (Thanks Ambien) than I am to developing news and trends.

June 1, 2021 (LifeSiteNews) — Nickelodeon took another major step toward the sexualization of children and their recruitment into cultural activism recently with a segment of the long-running preschool-aimed show Blue’s Clues that featured a song about an LGBT pride parade and all the variety such events entail, sung by a drag queen.

The show’s latest iteration, Blue’s Clues & You!, continues the original format of a cartoon dog named Blue being “guided” by the audience to various clues, thereby helping small children learn how to identify and put together shapes, objects, etc. It is rated TV-G in the United States (meaning suitable for all ages), and more than a third of its viewers are below age five.

Yet despite — or perhaps because of — the youth and innocence of its target audience, Blue’s Clues & You! recently featured an animated pride parade, narrated via song by drag queen Nina West. The song runs through various “nontraditional” family structures adorned with numerous variants of the rainbow LGBTQ+ pride flags, all with a refrain of “they love each other so proudly” or a similar phrase.

The floats are described as, in order:

The song ends with a declaration that “love is love is love, you see, and everyone should love proudly,” with West wishing Blue a “Happy Pride Month,” which occurs in June. Additionally, thoughout the video, the animated West can be seen holding a microphone bearing the clenched fist logo popular among Black Lives Matter (BLM) and other far-left groups.

The segment is a step further from a brief pro-LGBT message in an alphabet song the show ran in February, which included the entry “P is full of pride!” as the stylized letter was flanked by eight different “pride” flags, representing non-white LGBT, asexual, lesbian, bisexual, nonbinary, genderfluid, intersex, and pansexual pride.

Both clips appear intended to, at a minimum, get children to ask their parents what the flags and terms mean, forcing families into discussions for which parents may feel their children are too young, as well as setting up potential conflicts with Blue’s Clues’ endorsement of homosexuality and gender-fluidity versus parents’ own values.

Promoting homosexuality and gender-fluidity is nothing new for kids’ television.

In 2018, the final season of Cartoon Network’s Adventure Time depicted a lesbian kiss, and its Steven Universe featured a lesbian wedding. Other recent examples of “children’s” or “all-ages” shows to incorporate LGBT content include PBS’s Arthur, Cartoon Network’s Clarence; Netflix’s Voltron: Legendary Defender and She-Ra and the Princesses of Power; Nickelodeon’s The Legend of Korra and The Loud House; the Disney Channel’s Star vs. The Forces of Evil; Amazon’s Danger & Eggs; and even the preschool-aimed Disney cartoon Doc McStuffins.

This past March, Nickelodeon went so far as to host far-left pro-abortion Democrat Vice President Kamala Harris as a “champion of kids and family issues” during its annual Kids’ Choice Awards.

Here is the entire show.

I just put my aversion aside and listened to most of the show. I was particularly fascinated by, and tried to work out what Doc Burkhart’s reaction to the overarching dominance of Yiannopoulis.