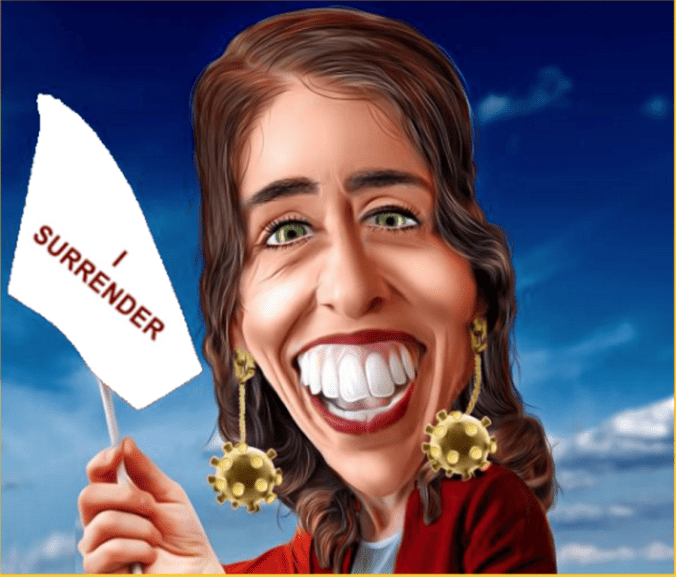 Not only are boosters ineffective, but the excess mortality currently running in New Zealand points to a serious health deficit among the vaccinated, and Prime Minister Jacinda Ardern is fully aware of this.

Leading New Zealand epidemiologist Professor Michael Baker, in an interview with the NZ Herald, says that we are “losing the arms race with the virus”. Covid cases have increased by 50% within the last 9 days in an “abrupt rise”. Baker said “It’s a dynamic, a battle between us and the virus and there are factors mainly favouring the virus”. The article reported hospitals were overwhelmed.

In contrast, Professor John Gibson, economist at Waikato University, has published a paper showing that not only are boosters ineffective, but the excess mortality currently running in New Zealand points to a serious health deficit among the vaccinated. Similar rises have been measured around the world, often affecting the young and working age. So why is this kind of analysis not turning heads?

New Zealand is among the most highly vaccinated nations in the world. As the published scientific data and analysis seems to be offering some very clear negative health conclusions about mRNA vaccination, why are we still lacking a rational resolution, and simply calling for more vaccination? It is a very personal concern for all of us to puzzle out how this came about.

Many of you write to me with your own analysis and also send links to other writers and researchers. Some people are focusing on the role of the World Economic Forum and the great reset, others on the profit motive of pharmaceutical companies. There is a very wide range of political, scientific, social, medical, and religious perspectives among commentators and correspondents. Some people perceive sinister and alarming objectives at work.

Out of all this, there are obvious priorities:

Biotechnology intervention has a history of mistakes

Whatever forces are at work driving current events, there is a history of mistakes and trends that needs to be considered. The biotechnology era began with the discovery of DNA in the early fifties, over 70 years ago. The huge risks of genetic editing should have been apparent from the start, but the promise of a new kind of super medicine gradually overhauled and has now overwhelmed caution.

Is this sufficient to explain what is going on today? No. The predominant irrationality of our current situation cannot be solely explained by belief or investment in biotechnology. Certainly, as we have argued, biotechnology experimentation should be paused, this is a vital part of a potential solution. People also need to understand how we came to where we are today.

The current crisis involves many players with different motivations and understandings, but what binds them all together into the cohesive structure of pandemic policy and compulsory global medical uniformity? Why is this occurring in the face of the obvious ineffectiveness and irreversible dangers of the new biotech medicine?

The answer may lie with history. When global warfare breaks out, nations take sides and in many ways begin to leave commonsense behind. They form allegiances that ignore traditional boundaries. The predominant aim is global dominion. Thus Japan was not Hitler’s natural ally, but the politics of war dictated a marriage of convenience in the search for an expanded territory of influence.

Prior to the pandemic, for many years pressure had been building to adopt biotechnology, first in agriculture and food, and then in medicine, and certainly in weaponry. For the wannabe winners, the potential profits appeared huge. Food, medicine, and conflict are the global markets which flourish come rain or shine. The financial pressure was building up behind the biotechnology dam

The release in 2019 of a novel biotech pathogen, whether accidently or not, was the first salvo in a completely new type of global warfare. As in all mega conflicts, the whole world began to take sides. The process of polarisation, so typical of conflict, began to dominate affairs in every country. The dogs of war were let loose.

Biotech vaccines were the supposed defensive weapons and the whole economic process was turned over to vaccine production and promotion. No expense was to be spared. In some countries, as in New Zealand, political parties closed ranks behind the war effort. Advertisements proclaimed your patriotic duty to get behind vaccination and still do. Everyone was called up for duty. If you were a conscientious objector, you were shunned. Human rights were suspended.

War has its own forms of rational justification, but its effects are always horrific. Young men and women are sacrificed to conflict without qualms. This was to be equally true of biotech warfare. But there are no noble causes involved. We are being sacrificed for the sake of obscure vested interests in university laboratories and pharmaceutical research divisions seeking to launch themselves into the stratosphere of global power.

These power mongers have all but succeeded in mandating compliance. The vaccinated were heros, lauded, decorated, and rewarded by the government. Those injured by the vaccine were unlucky, but somehow, like the casualties in war, they had fallen short and were ignored.

In this war, rather than protecting the young by moving them far from the sites of conflict. They have been moved centre-stage. Even though they are at little or no risk from Covid infection, they have been exposed to a significant and measurable risk of cardiac damage through mRNA vaccination. This has been done to satisfy a theoretical but now proven utterly false idea that their vaccine induced immunity would ‘shield’ their parents and the wider society from possible infection.

As in Hitler’s Reich, science has become subservient to the state. Dissenting scientific voices urging caution are punished. Rather than pausing for reflection, biotech research efforts have concentrated on the development of even more risky weaponry, both vaccines and diseases. Politicians are vying with one another to appear the most committed and the most generous with funding.

Within the social psychology of war, there are many trends. There are profiteers who make fortunes at everyone’s expense. There are sadists who are finally given free rein. There are absurd rumours circulating freely. There is government propaganda faithfully parroted by the media further obscuring the truth in the fog of war. All of these have been present in good measure during the pandemic.

This is not a conventional war, it is a dire disaster encompassing all in fear and ill health. The global pandemic response has been entirely mistaken. Faced with an indiscriminate bioweapon, whose ultimate effect was unknown, the world’s so-called powerful nations deployed more mobile and invasive biotechnology. They opened the lid of Pandora’s box even wider.

Wars often end with hollow victories over the enemy, surrender, truce, or exhaustion. Biotech war has no traditional enemy nation to be defeated. The enemy is a new form of man-made life—non-human, unnatural, toxic, but quite capable of surviving and even multiplying.

This war has started, but have we already scuttled our flagship? The conflict between human immunity and pathogens is an age-old conflict which humans have always won, but now in folly we have hobbled our flexible immune system through a prescriptive mRNA vaccine designed in a lab, never sufficiently tested, and forced on everyone through coercion and the removal of our rights to education and work. The final outcome is unknown but already at the latest NZ data indicates immune deficiency looms.

All sides in the economic pandemic sideshow have nailed their colours to the same flagpole. Biotech weapons are equal opportunity, they are destroying the foot soldiers of both sides as in trench warfare, but in this case they are also felling the architects, the generals and the non-combatants.

Governments will inevitably have to reconsider or face crippling losses

We protestors have gone cap in hand to the government, asking for our rights back, asking to be left to make our own medical choices. We have come away empty handed. As the casualties mount, governments will have to return to the table with their cap in hand.

Nature is the ultimate resource of stability. As hybrid varieties of potatoes fail and become prone to disease, breeders have to return to the seed pools of natural varieties in South America to restore viability. The great resource of health is to be found in the unvaccinated, whose immune system is still functioning with its amazing innate intelligence, learning how to defeat a viral enemy which cannot even be seen with the naked eye.

We need to understand and recognise that the collective psychology or consciousness of war is damaging. There are many sources of understanding and research in this field.

We certainly need to redesign our political models and constitutions to prevent the headlong rush into war. We need a Bill of Rights that prevents political parties, rogue scientists, and commercial interests from using us as cannon fodder as they test out their risky experimental ideas.

Safeguards are just as important with biotechnology as they were following the discovery of atomic energy. Possibly more so. Once released, biotechnology weapons cannot be recalled. They spread away from their site or origin around the world under their own steam.

Safeguards need to be promoted without reference to fiercely held political opinion and political divides. Yes, the first pandemic war is fuelled by political, financial, and authoritarian ambitions, but it will only come to an end when responsible people from all sides take common cause with commonsense. Call for a pause in biotechnology experimentation. Without this, there will be no peace and no safety.

Working Papers in Economics from University of Waikato

Abstract: The rollout of booster doses of COVID-19 vaccines to the general population is controversial. The ratio of vaccine risk to benefits likely has swung more towards risk than during the original randomized trials, due to dose-dependent adverse events and to fixation of immune responses on a variant no longer circulating, yet the evidence underpinning mass use of boosters is weaker than was the evidence for the original vaccine rollout. In light of an unsatisfactory risk-evidence situation, aggregate weekly data on excess mortality in New Zealand are used here to study the impacts of rolling out booster doses. Instrumental variables estimates using a plausible source of exogenous variation in the rate of booster dose rollout indicate 16 excess deaths per 100,000 booster doses, totaling over 400 excess deaths from New Zealand’s booster rollout to date. The value of statistical life of these excess deaths is over $1.6 billion. The age groups most likely to use boosters had 7-10 percentage point rises in excess mortality rates as boosters were rolled out while the age group that is mostly too young for boosters saw no rise in excess mortality.

Related works:
This item may be available elsewhere in EconPapers: Search for items with the same title.