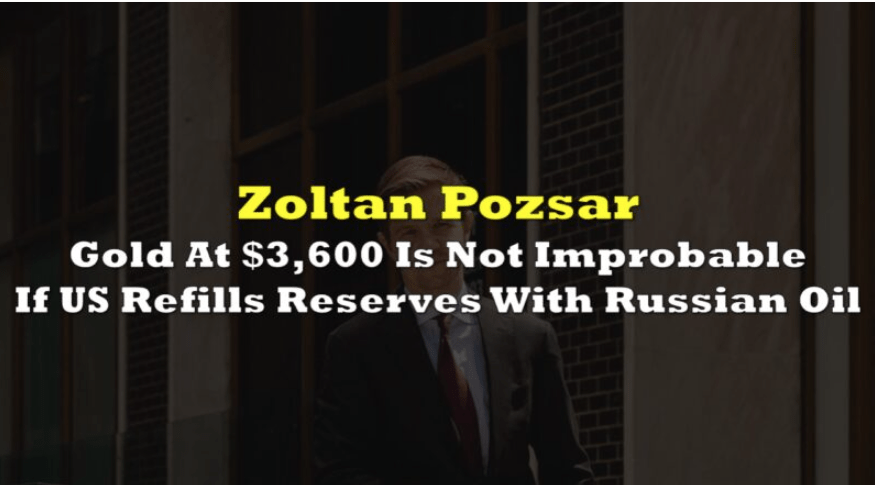 Instead, the author zeroed in on the depleting Strategic Petroleum Reserve (SPR) of the United States, posing the query of what comes next after the White House shipped its last scheduled release.

“Now that SPR releases are over, production cuts by OPEC+, re-routing [of Russian crude oil from Europe to Asia], and price caps (not to mention the risk of China re-opening due to protests), the question for the U.S, becomes what to do with the SPR? Release more? Refill?” pondered Pozsar.

Back in September, US President Joe Biden’s administration said it is looking at refilling its oil reserves should crude oil prices drop below US$80 a barrel. The prices have traversed the levels below that said mark but the White House moved the price target lower in October after it announced its plan to release 15 million barrels of oil more.

“The Administration is announcing its intent to use SPR repurchases to add to global crude oil demand at times when the price of West Texas Intermediate (WTI) crude oil is at or below about $67 to $72 per barrel,” the White House statement then read.

After the US Department of Energy sold the last batch of crude oil from the historic SPR release, the reserves continue to bleed in the hopes of managing rising inflation and local energy prices. The current level is now below the 400-million barrel-mark, poised to hit a nearly 4-decade low.

“That plan [of refilling reserves when prices hit low] is hard to reconcile with OPEC+’s price target near $100 per barrel. Yes, we are headed toward a recession, but unlike in 2008 or during Paul Volcker’s reign, oil prices aren’t collapsing as production capacity hasn’t grown recently,” explained Pozsar.

He then enumerated the hypotheticals of Russian oil playing into the strategy. First, Russian crude already trades at a $30 discount to Brent. China and India are commonly recognized to be major buyers of Russian crude. Purchasing Russian crude at $60 per barrel and selling diesel at $140 per barrel results in a great profit margin. As a result, India and China act as matched-book commodity traders, with the former trading in oil and the latter in LNG, so keeping commodities in circulation.

Second, Pozsar noted that the possibility of sanctions for purchasing Russian oil has undoubtedly changed significantly for some countries.

“The United States is happy for India to continue buying as much Russian oil as it wants, including at prices above a G7-imposed price cap mechanism, if it steers clear of Westem insurance, finance, and maritime services bound by the cap,” the author quoted a recent statement by Treasury Secretary Janet Yellen.

He added that this “change in tune could be one backdoor mechanism to refill the SPR, and
given the $30 dollar discount to Brent that India is paying for Russian oil,” this would fall within Biden’s oil price target for refilling.

However, even if Russia is already selling oil at $60 per barrel–the same price set for the cap–Russian President Vladimir Putin might still be “not interested in selling at capped prices out of principle.”

“If Russian oil is re-exported from India for that end, President Putin probably won’t like that out of principle either. Russian oil shall not age in giant, underground salt caverns along the U.S. Gulf Coast,
or, if it were to, then payments will be accepted only in gold, not dollars or rupees,” noted Pozsar.

Pozsar also said that at current market prices, “the cap of $60 per barrel for Russian oil equals the price of a gram of gold.” In a hypothetical that US pegs Russian export at this price and Russia then pegs it at a gram of gold, “the US dollar effectively gets ‘revalued’ versus Russian oil.”

“But if the West is looking for a bargain, Russia can give one the West can’t refuse: ‘a gram for more’. If Russia countered the price peg of $60 with offering two barrels of oil at the peg for a gram of gold, gold prices double,” Pozsar explained.

Given this scenario, the author said that Russia won’t probably increase its production to match this hypothetical demand but would ensure just enough so production doesn’t get shut.

“And most important [sic], gold going from $1,800 to close to $3,600 would increase the value of Russia’s gold reserves and its gold output at home and in a range of countries in Africa. Crazy? Yes. Improbable? No,” Pozsar added.

The contributor added that Russia’s decision to link gold to oil would be instrumental to “bring gold back as a settlement medium and increase its intrinsic value sharply.” However, this scenario runs a risk of liquidity shortfall for banks that are active in paper gold market, “as all banks active in commodities tend to be long OTC derivative receivables hedged with futures.”

“That’s a risk we don’t think enough about and a risk that could complicate the coming year-end turn,
as a sharp move in gold prices could force an unexpected mobilization of reserves and expansions in balance sheets and risk-weighted assets. That’s the last thing we need around year-end,” summed Pozsar.

Brent benchmark is yet to fall below the $80-mark while WTI benchmark is still a hairline above the $75-mark. Meanwhile, gold is on a rebound from its lowest year-to-date levels sustained last month, skirting below the $1,800-mark.