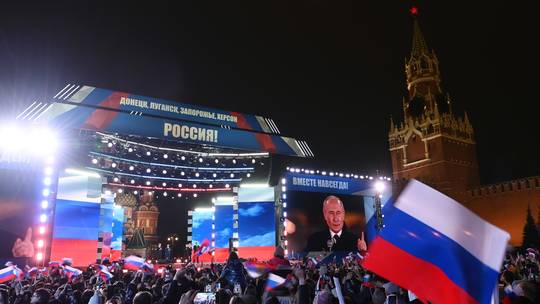 The former Ukrainian regions made the choice to be with their “historical motherland,” the Russian leader claimed

Putin’s emotional speech came just hours after he signed treaties on the inclusion of the Donetsk and Lugansk People’s Republics, as well as Kherson and Zaporozhye Regions, into the Russian Federation. The signing ceremony marked the start of the formal process of accession, which will entail the treaties being reviewed by the Constitutional Court and both chambers of parliament.

Claiming it was Russia that originally “created modern Ukraine” by transferring Moscow’s “historical territories” to it, Putin said modern Russia had now given people in those regions “the right to choose.”

“People came to the referendum and made their choice: to be with their historical motherland, with Russia,” he said to applause from the crowd.

For decades, Putin claimed, the Ukrainian authorities had unsuccessfully tried to eradicate people’s “historical identity,” to destroy their traditions and forbid them from speaking their native language.

“These people carried love for their historical homeland in their hearts and passed it on to their children,” the president said, adding that Russia was not only opening its doors, but was “opening its heart” to them.

“Welcome home,” he said, prompting chants of ‘Russia’ from the crowd.

Putin also used the address to make several pledges: to improve security in the new territories, to revive their economies and to build schools and hospitals.

“We became stronger because we are together. The truth is behind us, and truth means strength, and thus victory. Victory will be ours,” Putin said in conclusion, before shaking hands with the heads of the regions, who joined him on the stage.

Meanwhile, on Thursday, on the eve of what Putin described as a “historic day,” UN Secretary-General Antonio Guterres called on the Kremlin “to step back from the brink” and to stop the “annexation” of the four Ukrainian regions.

Guterres also warned Russia that neither the inclusion of new territories into Russia, nor the results of their referendums would be recognized as legal. Moscow, in turn, accused the secretary-general of abusing his power by making political statements on behalf of the UN.

From the nationalist  TV channel, Tsargrad

Russia will never again accept the dictates of the West. The path is selected. We go back to our roots, choose the path of Empire, where everyone will be protected. Vladimir Putin’s main statements were made in the Kremlin.

The speech of Russian President Vladimir Putin in the Kremlin is not only and not so much about the Donbass and Ukraine. Putin spoke today about the essence of what is happening in the world. The reasons for the hybrid war of the collective West against the Russians. And, as a result, the roots of the ongoing processes. But most importantly, Vladimir Putin has drawn a path that we will not deviate from.

“I want to be heard by the Kiev authorities and their real masters in the West, so that everyone remembers this. People living in Luhansk and Donetsk, Kherson and Zaporizhia become our citizens. Forever.”

“We call on the Kiev regime to immediately cease fire, all fighting – the war it unleashed back in 2014 – and return to the negotiating table.”

“We will protect our land with all the forces and means at our disposal, and we will do everything to ensure the safe life of our people. This is the great liberation mission of our people.”

Russia will never accept the” truths ” of the West

“It is the so-called West that trampled on the principle of inviolability of borders, and now, at its own discretion, it decides who has the right to self – determination, and who does not, who is not worthy of it. Why do they decide that? Who gave them this right is unclear. By yourself.”

“All we hear from all sides is that the West defends the rule-based order. Where did they come from? Who has ever seen these rules? Who approved it? This is just nonsense! Complete deception, double or already triple standards. Designed for fools. Russia is a great millennial power, a country-civilization, and will not live by such rigged, false rules!”

“The West does not have any moral right to give assessments, even to mention freedom and democracy. No, it never was.”

Russia will not turn into the USSR, but will return to the status of an Empire

“After the collapse of the USSR, the West decided that we would always put up with its dictates, and Russia would fall apart on its own. But Russia has been reborn, strengthened, and regained its rightful place in the world. The West has always dreamed of dividing Russia and pitting its peoples against each other.”

“Russia is fighting for a free path of development without dictates and despotism. As it was, it will no longer be… The battlefield is for greater historical Russia… We have the truth behind us. Russia is behind us.”

The Russian Way is our destiny

“The world has entered a period of revolutionary transformation. “We have a lot of like-minded people all over the world, and we see their support. A liberation movement against unipolar hegemony is developing all over the world. Today we are fighting to make dictatorship and despotism a thing of the past forever. A policy based on the exclusivity of someone and the suppression of other cultures and peoples is criminal. We must turn this shameful page.”

“We have a lot of like-minded people all over the world, and we see their support. A liberation movement against unipolar hegemony is developing all over the world. Today we are fighting to make dictatorship and despotism a thing of the past forever. A policy based on the exclusivity of someone and the suppression of other cultures and peoples is criminal. We must turn this shameful page.”

“The battlefield is for our people, for great historical Russia. We need to consolidate the whole society. Our values are humanity, charity and compassion. As Ivan Ilyin said, ” I believe in the spiritual strength of the Russian people, its spirit is my spirit, its destiny is my destiny, its suffering is my sorrow, its flourishing is my joy.”

“The battlefield that fate and history have called us to is a battlefield for our people, for the future of Russia.”

Russia has been reborn. Russia has regained itself

After the end of the speech of Russian President Vladimir Putin, agreements were signed on the accession of four new regions to our country. Now there are 89 subjects in the Federation – we have accepted the Donetsk and Luhansk People’s Republics, the Kherson and Zaporizhia regions.