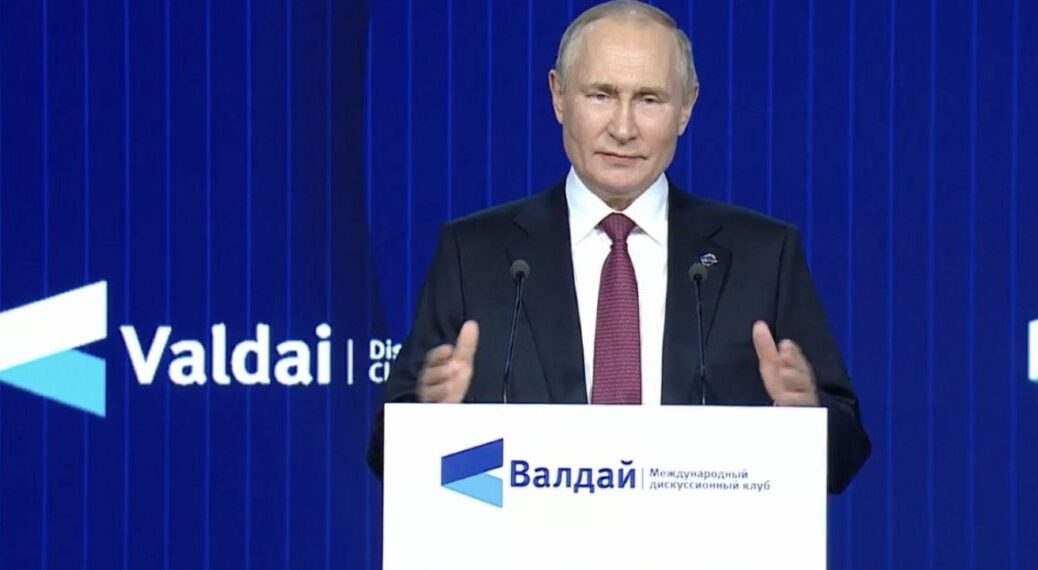 Historic speech by B.Putin: The unipolar world is over – S.Arabia asked to join the BRICS! – Ukraine has a “dirty” bomb ready (Part A’) 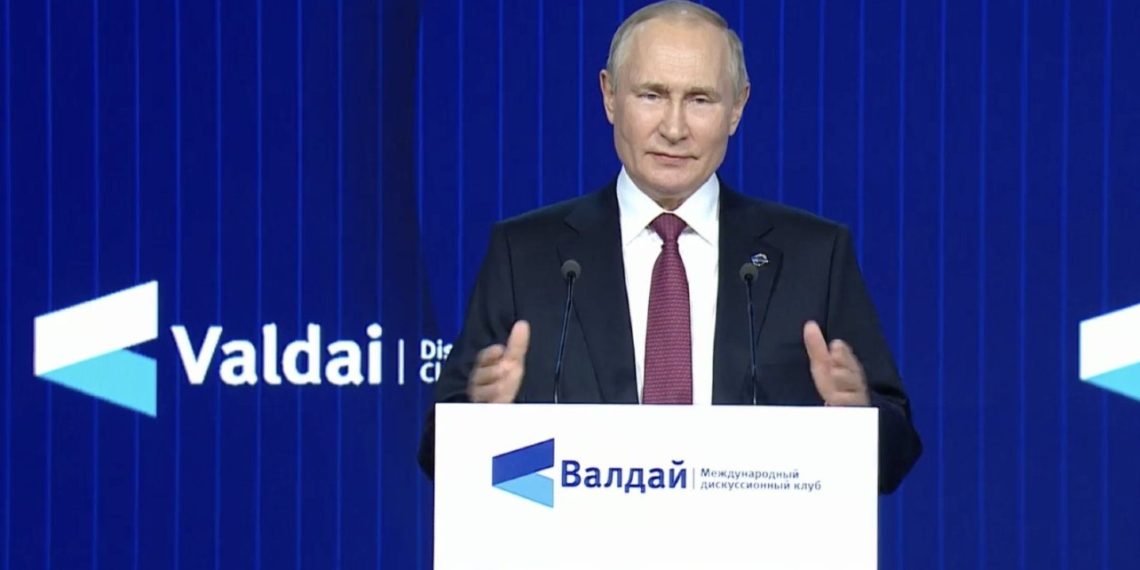 The representative of the Kremlin, N. Peskov, meaningfully emphasized that “this speech should be studied, read and re-read for several days”.

The theme of the session is “The world after hegemony: Justice and security for all”.

This year’s meeting of the association is attended by 111 experts, politicians, diplomats and economists from 41 countries.

The most important points of Putin’s speech: Saudi Arabia wants to join the BRICS!

– Russia supports the inclusion of Saudi Arabia in BRICS, the consent of all countries is required, said B. Putin, fully confirming WarNews247 for Riyadh’s request.

-The collapse of the Soviet Union destroyed the balance of power. The West felt victorious and proclaimed a unipolar world order in which only its will, culture and interests had the right to exist…

-Today, the unipolar world is a thing of the past. We are at a historic milestone. The most important and dangerous decade since World War II lies ahead.

-We have evidence that the Ukrainians will use a dirty bomb. We are very worried. I personally instructed S. Shoigu to inform all his foreign counterparts about the crime that the Kiev regime is preparing to commit

-Ukraine is seeking a nuclear incident to blame Russia and start a “new round”. We talked about the “dirty bomb” that Kyiv is creating, we even know where it is being made. Ukraine is now doing everything to cover the traces of the preparation of the “dirty bomb”

– We don’t need a nuclear strike on Ukraine. Everything is going smoothly. There is no sense, either military or political, for us to use nukes.

-The Special Military Operation in Ukraine is a peculiar civil war.

-Russia created Ukraine and only Russia can guarantee its existence.

Ukraine was a creation of the Bolsheviks. The Communists endowed Ukraine with primeval Russian lands. They gave her territories on the Black Sea, in the Donbas that were Russian.

-We did not stage a coup in Ukraine. The legitimately elected President was overthrown by Western-instigated violence. A tactic they follow all over the world. Any leader who does not agree with them is their enemy and they want to overthrow him.

-The Russian and Ukrainian people are one. They are a united people who speak the same language. Changes in the language began to appear in the 15th century. under Polish influence.

-The Kiev regime refused to implement the Minsk Agreements because it had received guarantees of support from NATO.

Statements by V. Putin: Change the S.A. of the UN

-We must consider changing the structure of the UN Security Council to reflect the diversity of the rapidly changing world. All regions of the planet must be equally represented.

-In 2000, after my election as president, I will always remember the price we paid to destroy the nest of Western-backed terrorists in the North Caucasus

– Let’s live together, let’s dialogue and build trust, which means peace. We were completely honest. What did we get in return? In all possible areas of cooperation, we received a “no”

– Visits by American officials to Taiwan are a challenge. Putin on Nancy Pelosi: Why did this grandmother have to be dragged to Taiwan?

-Erdogan is a strong, powerful leader who is guided by the interests of the Turkish people. We proposed the creation of a natural gas hub in Turkey, Ankara agreed. We have many overlapping mutual interests

-When our troops approached the historical Novorossia, how could we not respond to the aspirations of the local residents

-Kiev is ready to fight Russia to the last Ukrainian

-Nationalists and neo-Nazis are merging in Ukraine, this is actually a big problem

-South Korea has decided to supply weapons to Ukraine, this will destroy its relations with the Russian Federation

-The principle that says “we never abandon any of our people” is deeply rooted in every Russian. We proved it in Ukraine. The West has no such moral principles.

-NATO expansion was unacceptable to the Russian Federation and the West knew this, but ignored it. Negotiations on non-expansion of NATO were “simply rejected. The West wanted to show off its muscles and “show who’s boss at home” with the coup in Ukraine.

-The future of the world order is taking shape before our eyes. We must accept every worldview system without imposing a single truth on anyone

“The dialogue between Russia and the West and other centers of development will become more important in the new world order. We tried to establish relations with the West and NATO, to make friendships with them. But the West imposes sanctions on those who do not want to be “in its hand”, added the Russian president, claiming that the West seeks to make Russia vulnerable.

-The future is the liberal globalized economy. The economy and trade must become freer.

V. Putin: “The time for the East has come! – The West becomes a global outcast – Introduces dozens of genders and pride parades! (Part B’)

It sealed the strategic alliance with Iran 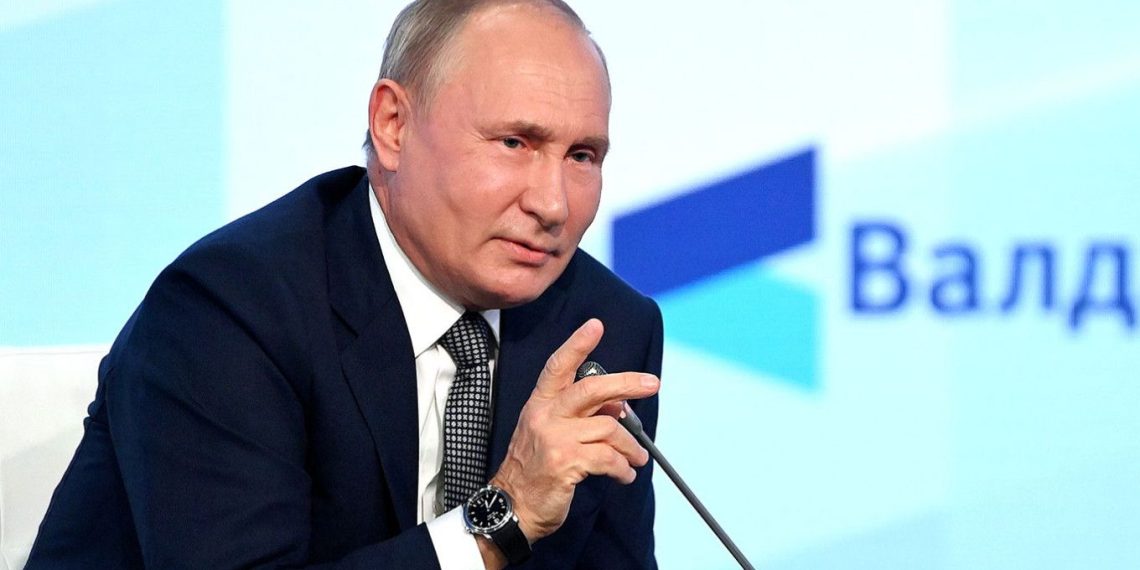 In Part 2 of the most important interview of the last 20 years by Russian President B. Putin, the rise of Asia and the disintegration of the West are discussed due to the policies adopted by the governments.

It is characteristic that the interview ended and B. Putin stopped talking after almost 4 hours. Complete the event with the words “Success is assured”

At the beginning, the Russian president delivered a keynote speech (42 minutes), and then the Russian head of state answered questions from club members for almost three hours.

Read also: V. Putin’s historic speech: The unipolar world is over – Saudi Arabia has asked to join the BRICS! – Ukraine has a “dirty” bomb ready (Part A’)

B. Putin’s special reference to Iranian General K. Soleimani and the way in which he was assassinated by the Americans ” even though he was a representative of the Iranian government in Baghdad” stands out.

They have no limits. They are not ashamed of anything. You can judge Suleimani as you like but he is an official of another state. They murdered him on the territory of a third country and said “yes we killed him”.

What the hell is this? Where do we live?”

With this special reference, B. Putin seals the now strategic alliance with Iran.

“The time has come for the East and Asia”

-Westerners have the illusion that there is only Western civilization in the world. They find it difficult to adapt to the new reality, but they will be forced. The majority of the world’s population is in the East.

-There are two Wests, the traditional West, mainly of Christian values, with which we have much in common and even ancient roots, and the cosmopolitan West, which functions as a tool of the liberal elites.

-The West, losing its superiority, turns into a minority, but its rights must be guaranteed unconditionally

-Losing its global dominance, the West is turning into a worldwide pariah. New trends, gay parades, dozens of new races of foreigners have been imposed on Western societies. Their right. But they have no right to want to impose the same on other countries.

“If Western culture wants to introduce dozens of genders and pride parades, let them do it. But they have no right to demand that others follow in their footsteps.”

-Human dignity is the foundation on which we must build our future. Traditional values ​​are not a fixed set of claims, in any case they are unique to each nation, they should not be imposed, but respected

-The neo-liberal (ie internationalist) ideology has crossed the line. Neo-liberals have begun to declare that an open society has enemies and that their freedom must be curtailed or destroyed.

– We see that complex demographic, political and social processes are happening in Western countries (including the Great Restart). This is their internal affair. Russia does not interfere in these matters and will not intervene. Unlike the West, we are not invading someone else’s backyard.

-The Western economic blitzkrieg against Russia has failed.

Heavy attack against the West

The Russian President V.Putin launched a series of tirade against the West from the Valdai Forum.

As he claimed, the US and NATO are doing everything to escalate military operations in Ukraine.

They are fueling the war in Ukraine, sending politicians to Taiwan, destabilizing global food and energy markets.

As to the latter, I have no doubt.

It is due to a series of systemic mistakes committed by the Western authorities,” he said, adding:

For this he plays a dangerous, dirty and bloody game.

It questions the sovereignty of peoples and nations, their identity and uniqueness and is not interested in the interests of other states.

It is no accident that she says that her culture … should be recognized as universal.

That’s how they behave.

And they insist through their politics that they all accept these values ​​unconditionally.

She is blinded by colonialism.

Backed by the West, the Kiev regime publicly repudiated the Minsk agreements.
NATO expansion was unacceptable to Russia, all our efforts to convey this idea were ignored.

The coup organized there led to Russia’s special military operation in Ukraine.

And, unfortunately, behind their arrogance, many European countries do not notice that they themselves have already become vassals, often without the right to vote.”

The dominance of the West is over

Referring to Ukraine, he stressed that the developments since the start of the military operation signal changes in the existing world order, adding that the dominance of the West is over.

He even added that from now on Asia’s voice in world affairs will be stronger.

The Russian president stressed that he is constantly mindful of the losses of Russian soldiers on the battlefield, but stressed that Moscow had no choice but to launch the “special military operation”.

“Ukraine has historically developed as an artificial state,” the Russian president said.

Putin, when asked if what is happening between Russia and Ukraine can be considered a civil war, said: “Partly, yes.

The Russian and Ukrainian people are united, this is a historical fact.

Ukraine is an artificial state.”

According to the Russian president, humanity has two options: either to continue to “accumulate all the problems that are sure to overwhelm us all” or for nations to work together “to find solutions”.

Putin asserted that Russia is not an enemy of the West, but emphasized that he will not tolerate dictates and orders from it.

“Western elites have no right to impose their way on others, no one can dictate to our people how we should build our society.

Westerners are indifferent to laws and rules, considering other people as second class.

They use economic sanctions and “color revolutions” (aka coups) against their opponents, as they cannot compete fairly with the rising economic and political power of Asia.

The US discredited the international financial system by using the US dollar as a weapon and estimated that other countries’ moves to reduce their dependence on the dollar would be accelerated.

Westerners, however, are hypocrites.

They sell their businesses for a dollar to their administrations and whisper in their ear, we won’t be late, we’ll be back soon.

The latest developments are “tectonic shifts in the world order,” he said and added that we are facing one of the most “dangerous” and “unpredictable” decades after World War II,” the Russian president concluded.