China’s leadership called for “suppression of enemy forces” and points to the US for the uprisings: tanks took to the streets (video) 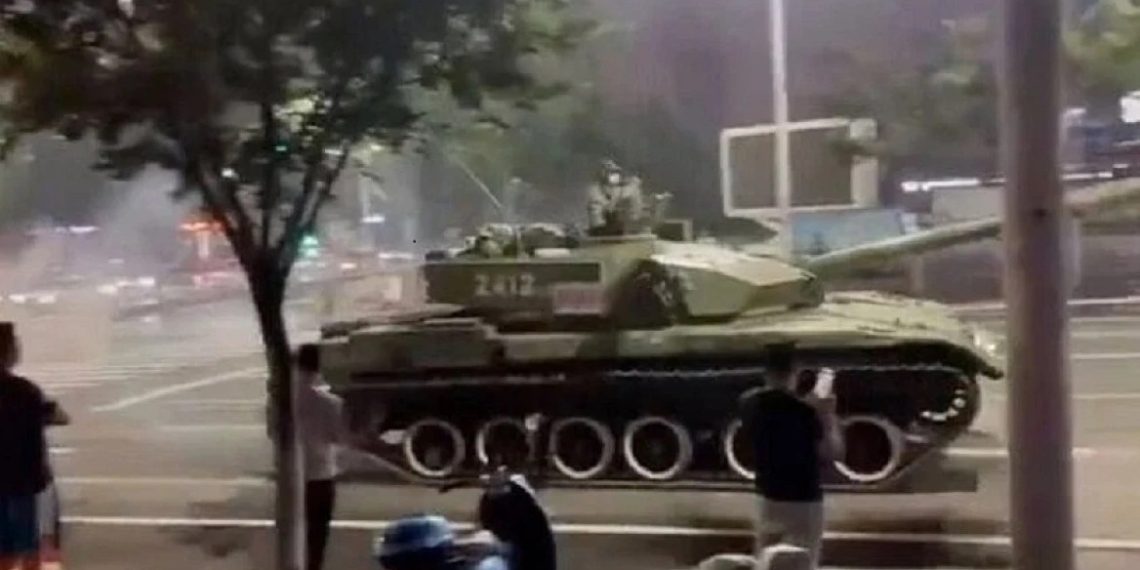 After Iran, China too is shaken by civil uprisings taking place simultaneously in many cities across the country. This resulted in tanks and armored vehicles being deployed on the streets of Chinese cities such as Shanghai, Wuhan and Hangzhou.

Other movements take place at night, but in some cases the chariots move through the main streets during the day, in a clear message of show of power.

Today, the country’s highest body that oversees the security forces called for the “severe repression of hostile forces”, i.e. the criminal elements, which it directly links to foreign elements.

Officially, China now talks about inciting rebellions and shows the USA setting fire to the relations between the two countries.

In Shanghai and Beijing, police appeared on Tuesday morning patrolling areas of the cities where some groups were likely to gather, they wrote on the Telegram social media app.

There were reports of police asking people for their phones to check if they had virtual private networks (VPNs) and the Telegram app, which was used by weekend protesters. VPNs are illegal for most people in China, while the Telegram app is blocked from China’s internet.

Chaos in China: Tanks took to the streets

Tanks took to the streets of China as Xi Jinping ordered a crackdown on anti-lockdown “White Revolution A4” protests.

Their appearance is a chilling echo of the Tiananmen Square massacre, when troops were used to brutally crack down on protests – prompting one man’s iconic protest by standing in front of a tank.

Footage of the tanks was widely shared after several days of historic protests in China, in which protesters waved white sheets of white paper in a symbolic protest against censorship.

Hundreds have taken to the streets in eight cities – including Beijing and Shanghai – after 10 people died in an apartment fire blamed on Xi Jinping’s draconian lockdown.

China’s massive security apparatus has now sprung into action to flood the streets with police and track down those taking part in the protests.

A phalanx of tanks was spotted in the eastern city of Xuzhou, prompting fears they could be headed in to quell the protests.

Furious residents have hit out at the Covid lockdowns as they said they were only allowed to leave home for short periods each day and the time was strictly controlled by authorities.

China’s main security body has called for the “suppression of hostile forces”, following protests against health restrictions and for more freedoms in China’s major cities.

The Political and Judicial Affairs Commission of the ruling Communist Party of China, which oversees law enforcement in the country, said it was “necessary to suppress the infiltration and sabotage activities of enemy forces under the law,” according to meeting minutes. , which were published by the Chinese news agency Xinhua.

The text considers of decisive importance the “severe repression according to the law of criminal actions that seek to overthrow the social order, but also the resolute protection of social stability”.

According to Reuters, Chinese protesters are using white sheets of paper to express their anger over coronavirus restrictions, in a rare, widespread outburst of public dissent that has transcended social media and reached some of its streets and top universities. China.

Journalists should not engage in actions unrelated to their role, China’s foreign ministry said today, after the BBC reported that one of the network’s journalists had been attacked and arrested while covering weekend protests in Shanghai.

Ministry spokesman Zhao Lijian said during a regular press conference in Beijing that the BBC was playing the victim.

Asked about the recent protests, he commented that China is a country where the rule of law and all rights and freedoms of Chinese citizens are protected but should be exercised within the framework of the law.

The protests in China are expanding

The deadly wildfire in China’s Xinjiang province has sparked a series of protests across the country.
“Communist Party, resign. Si Jiping, resign.” These slogans dared to be uttered by hundreds of demonstrators in Shanghai, the financial capital of China, who since Saturday night have been participating in protest events, following the new restrictive measures to fight the pandemic.

The protests were sparked by grief and outrage over the death of ten people after a fire broke out in an apartment building in Xinjiang province. Such an incident is not only considered unusual in China, but this time it was enough to trigger loud reactions.

In Shanghai one of the protesters, who identified himself as Jason, told DW that he decided to join the protests as soon as he read about them on Sunday night.

“As soon as I arrived at the crowded place, around 11:40 p.m.,” he says, “I found that the police had already cordoned off the area, while a group of protesters had been surrounded by police, who were calling them to leave .“Jason” then reports that “while some protesters remained silent, others chanted slogans, calling for the resignation of President Xi Jinping. Some of the so-called protesters were suspected to actually be plainclothes police officers who had infiltrated the crowd to sow discord.”

Another protester, who introduces himself as “Andy”, tells DW that what most of those taking to the streets want is an immediate end to the “draconian” restrictive measures against the pandemic. They estimate that these were also the cause of the deadly fire in Xinjiang.

“I think the lifting of restrictions and a return to normality was the only demand of the protesters,” he says. “ Regime change was an issue that few had proposed.” Kai Ong, a partner at Amnesty International, says that “before there were objections to the health measures, but after the fire people are starting to believe that their lives may now be in danger because of the restrictive measures.”

In addition to Shanghai, protests are spreading to university campuses in major cities such as Beijing and Nanjing.

“I don’t want PCR tests, I want my freedom,” is the characteristic slogan that appeared on protest posters in Beijing last month. “Andy” does not believe that the mobilizations will bring about radical changes in government policy. “From my experience and what I know about the Chinese Communist Party, I believe that the protests will soon die down,” he says.

“Jason” agrees with “Andy’s” assessment, to add that since the disappearance of tools like Telegram for the effective coordination of protesters, the mobilizations no longer have a unified character. He even warns that images of chaos in recent days may encourage the government to resort to even more drastic unilateral measures.

“Last night’s protests created a strong sense of threat, and this could trigger even tighter controls in Shanghai, but also across the country,” he tells DW.