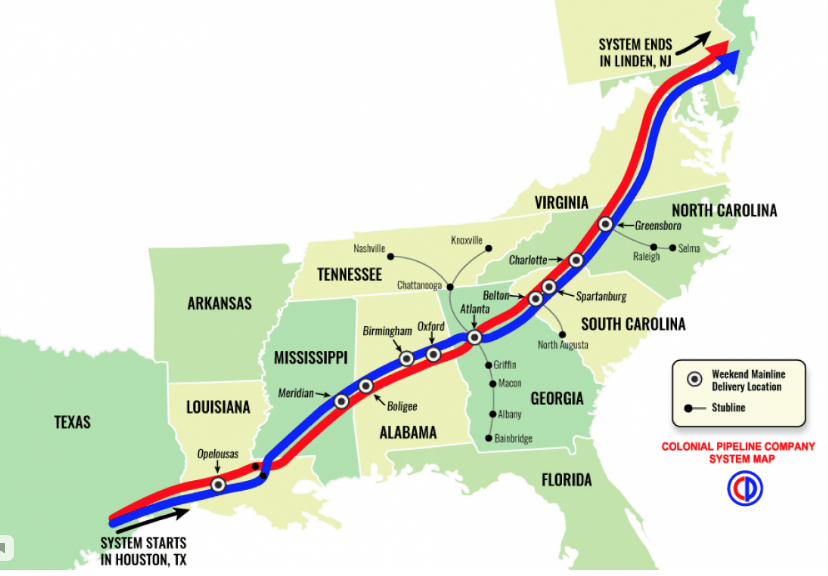 I didn’t touch this story yesterday because I could find no confirmation. 15 hours later the media comes to the party 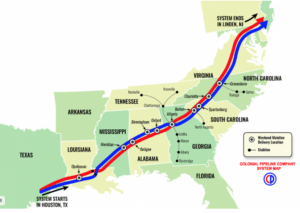 Reports are beginning to filter-in claiming the Colonial Pipeline, which provides 100 Million gallons of gasoline per day to fourteen different U.S. States, has been completely shut down by computer hackers.

The pipeline, which runs from Houston, TX to Linden, NJ is the supply line for  100 Million gallons of gasoline/Diesel fuel PER DAY for the entire northeastern United States.

The pipeline ends at Linden, New Jersey and fuel is stored in large storage tanks, then placed into tanker trucks to supply all of New York, Connecticut, Rhode Island, Massachusetts, New Hampshire, Vermont and Maine with gasoline!

In Linden, NJ, the storage tanks can hold up to forty-five (45) days worth of fuel; so as long as the alleged computer issues are resolved before then, there should be no disruption to normal supplies.

The Aviation fuel is a far different story.   Aviation fuel is stored at the airports, but not in vast amounts.   It is not known how long those airport fuel storage capabilities may last if the outage continues.

Attempts to reach Colonial Pipeline Corporate Headquarters for confirmation of these reports was unsuccessful.

Below is a far more detailed map showing the vastness of this particular pipeline system and the tens of millions of people it serves every day (Click map (twice) to enlarge): 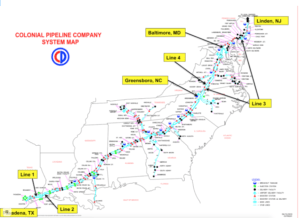 Further details if they become available . . .

Well, the New York Times (and after them, DRUDGEREPORT.com) finally began reporting this story at 9:14 AM eastern US time Saturday morning (Here)

Once again, this web site reported a major story of national importance, accurately, and literally HOURS ahead of the “mass media.”

The largest gasoline pipeline on the East Coast, and the US in general, was shut down on Friday after its operator struggled to contain a cyberattack which threatened its systems. The 5,500-mile Colonial Pipeline, which is the single largest refined-products pipeline in the United States, halted transit as the company was forced to take “certain systems offline to contain the threat, which has temporarily halted all pipeline operations,” according to The Wall Street Journal on Saturday. It’s reportedly still offline into early Saturday.

Colonial’s network is responsible for supplying fuel that originates with refiners on the Gulf Coast to most of the eastern and southern US, accounting for over 2.5 million barrels per day in gasoline, diesel, and jet fuel, or other refined products transferred, making up 45% of all the East Coast’s fuel supply. It spans from Texas through southern states and up to New Jersey.

“At this time, our primary focus is the safe and efficient restoration of our service and our efforts to return to normal operation,” the Alpharetta, Georgia-based company stated. “This process is already underway, and we are working diligently to address this matter and to minimize disruption to our customers.”

The disruption earlier in the day Friday saw Gulf Coast cash prices for gasoline and diesel push lower, though longer-term price effects will depend on just how long the lines remain shut. If the closure persists further into the weekend or even early next week, it’s very likely to send gasoline prices soaring.

The last time there was a significant shutdown of Colonial’s lines was during Hurricane Harvey in 2017, which shot spot Gulf Coast gasoline prices to a five-year high and diesel to near a four-year high.

This fresh cyberattack against vital American infrastructure has reportedly already seen federal agencies and law enforcement get involved, alongside a third-party cybersecurity firm brought in by Colonial to launch an investigation. Some of the early details of the investigation suggest a ransomware attack, which is being reported as follows:

The Washington Post reported that ransomware was used in the attack, citing two U.S. officials it didn’t identify. It wasn’t clear if the attack was carried out by foreign government hackers or a criminal group, the officials told the Post. In ransomware attacks, hackers typically encrypt an organization’s computer files and then demand a ransom payment to unlock the data.

Though there appears little in the way of culprits or suspected individuals or entities that may have carried out the attack at this early period of the investigation, we can expect the Biden administration to hold this up as a prime example of why his ambitious cybersecurity and power grid protection initiative is urgent and essential.

It also comes after the White House’s April 15 sanctions rollout targeting Russian officials and entities for alleged involvement in the SolarWinds hack. The need for an overhaul of cybersecurity and protections of US government and civil infrastructure networks has been a major theme of this administration, also stemming from leading Democrats quickly blaming Moscow for pretty much every hack which targets American companies or agencies for much of the past five years, despite cases often lacking any evidence as to responsible parties. The Iranians and Chinese have also increasingly brought in alongside the Russians as prime nefarious actors in terms of cyberthreats.

However, as was recently admitted in a Wired piece on the Oldsmar, Florida water supply systems hack wherein chemicals were added to the town’s water at dangerous levels, there’s also many instances of “unsophisticated” lone wolf hackers able to sometimes penetrate overly exposed systems.

But there’s little doubt that in this major instance of the Colonial pipeline going offline, we expect any moment to hear screams of “Russians!” – even before any evidence is publicly made available, if it gets presented