I am telling this story to illustrate how things that are happening impact on me, even as I live a fairly isolated life.

I have referenced several times a Russian friend whom I have known off-and-on since the 1980’s.Vadim has led a full life, being one of the first Russian Jews to leave the Soviet Union in 1984 moving to Israel which he left because it reminded him of the Soviet Union he had left.

When the neo-liberal reforms arrived in the 1980’s he recognised the similarities with the Soviet system.

It was listening to Vadim and his life experiences that made me rethink many of my previous, comfortable assumptions. He lived on his own quite happily until first his beloved public library was closed, never to be reopened again and then the lockdowns on 2020.

We were shocked at his state when we saw him in January; he had had several falls and, we suspect, some mini-strokes.  This aged him and brought about some unwelcome personality shifts.

He remained the courteous person he always was but he shifted his position on what was happened in his Russia 180 degrees and became rather obsessed with his new position and rather reluctant to talk about anything else.

He had withdrawn from the usual email interaction we had had and also from his best friend of 60 years, in Moscow. 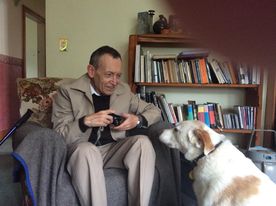 We were going to meet for a coffee but after he told my partner Pam that he had been double-vaccinated I changed my mind. I simply did not want to spend a couple of hours with someone who was double-vaxxed in a crowded cafe where a lot of others were vaccinated as well.

So I sent him the following letter:

Pam told me yesterday that you have been double-vaccinated. This is something that grieves me greatly.
Throughout the years we have known each other I have come to see you as an intrepid person who fearlessly stands up for what is right so it is a disappointment to hear that you have decided to comply with what is propaganda from a vociferous New World Order campaign that is worthy, in its mendacity to anything from Uncle Joe or Josef Goebbels.
I can understand the terrible circumstances of social isolation, pressure from friends and family, and relentless propaganda that might have led you to making this decision.
I have been researching this deeply and am convinced that this was a disease that no one should (with 26 deaths, all of elderly people with pre-existing conditions) worry about – at least here and in Australia. It was dying down as all viruses do, until the beginning of the year when “vaccines” (actually experimental gene technology) started to be unrolled leading those who are vaccinated to contract new forms of the virus produced by evolutionary pressure for the virus to mutate.
I also am convinced that those who have been vaccinated are a risk to the UNVACCINATED (the opposite of what we are being told).
The following will illustrate my concerns that run totally against what we are being told:
https://rumble.com/vmgp6a-whistleblower-nurse-death-by-vaccine.html
I have decided to go to the grave rather than take what I regard as a death shot, the taking of which precludes personal salvation (as per Revelations 13)- something we were talking about when we last met.
Before the roll-out of the “vaccines” I would have supported as much contact as possible but have to change my position somewhat.
it grieves me more than you can imagine to say that I am concerned enough for my own health to avoid going to crowded cafes full of the vaccinated and especially to sit in close proximity to someone who has been double-vaccinated and may share spike proteins (or whatever), something that in some cases has produced serious symptoms and illness.
Therefore, I cannot see how I can keep this appointment for now or any time in the near future until I am sure that you are unaffected by the shot.
None of this is at all personal but is my form of self-protection with my precarious health situation. I would be happy to keep up contact by Skype or Zoom
Your friend,
Robin
His response was brief:
“Fair enough”

3 thoughts on “Requiem to a Friendship”