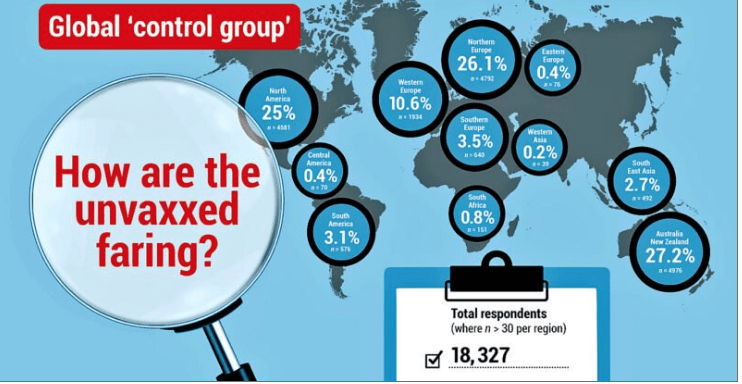 Imagine my surprise when I found this. 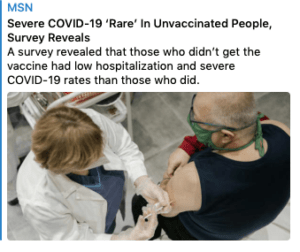 I was rather less surprised that this happened.

Tony Fauci must have got wind of the article and it has been DISAPPEARED.

It’s a good thing that other outlets were onto the story. However, it means that many who might have heard this won’t.

The unvaccinated did not create a disproportionate burden on health systems, according to a survey of 300,000 individuals who did not receive the COVID-19 vaccine. In fact, severe COVID was rare in people who didn’t get the vaccine. as per the survey.

There have not been many studies comparing the outcomes of people who chose to depend on natural immunity and natural products vs people who chose COVID-19 genetic vaccinations, the latter of whom may or may not have additionally tried to improve their immune systems.

As demonstrated in the case of U.K. data (read below) by professor Norman Fenton and his team at Queen Mary, University of London, the few that have been performed frequently mix the immunized with the unimmunized.

With the initial publication of the analysis of survey results from the global Control Group project, also known as the Vax Control Group, this situation has changed.

The Control Group Cooperative in Eastbourne, United Kingdom, launched the citizen-led project, which has more than 300,000 subscribers.

The survey results provide significant revelations, such as:

Watch the video below:

An multinational survey of a health-conscious, unvaccinated “Control Group” of over 300,000 people reveals that participants exert little strain on healthcare systems due to their reliance on innate immunity, self-care, and natural health supplements to help avert or even treat COVID-19.

This population nevertheless experiences unjustified discrimination, job losses, and mental health problems that are made worse by their exclusion from regular society.

A subset of the over 305,000 individuals from more than 175 nations who joined the citizen-led initiative and chose not to acquire the COVID-19 vaccination is included in the survey of participants in the “Control Group.”

The results, which were recently posted to the preprint server ResearchGate, demonstrate that participants experienced low rates of severe COVID-19 disease during the 5-month survey period (inclusively from September 2021 through to Feb. 2022), rarely required hospitalization, and regularly used natural health products for both prevention and treatment of mild to moderate COVID-19.

An independent, global team underneath the direction of multidisciplinary scientist and founder of the non-profit Alliance for Natural Health International, Robert Verkerk Ph.D., examined and analysed the data from the Control Group survey’s initial five months.

Via their recent cooperation with the World Council for Health, a non-profit, international coalition of health-focused organizations and civil society organisations, the writers got together to analyze the survey data.

The survey results were based on a sub-cohort of roughly 18,500 Control Group participants who had responded to monthly questionnaires during the study’s first five months.

The study gathered a wide range of information, including reasons why respondents refused vaccinations, with mistrust of authorities and pharmaceutical firms and worries about negative side effects from inadequately studied vaccines ranking highly on the list.

The stigma and discrimination experienced by those who refused to receive the COVID-19 vaccine may have contributed to the participants’ severe mental health issues.

Additionally, it was shown that women who had not received the COVID-19 vaccine experienced menstrual and clotting irregularities that may have been brought on by viral infection, shedding, spike protein exposure, or pandemic-related behavioral changes. The least amount of COVID-19 illness was reported by those who never wore masks.

When comparing survey results to national statistics or studies based on randomly chosen populations, it is important to keep in mind that the respondents were self-selected and self-reported.

The Control Group project, based in the United Kingdom, was launched in the middle of 2021 as a citizen-led cooperative with the goal of assessing the long-term healthcare outcomes of COVID-19 vaccine-free individuals as well as connecting its participants to national support systems and online community groups.

This was replicated by Children’ s Health Defense

A survey of 300,000 people who didn’t get the COVID-19 vaccine revealed the unvaccinated didn’t place a disproportionate burden on health systems — in fact, they experienced very low rates of hospitalization and severe COVID-19.

By Alliance for Natural Health International Health practitioners across the United States were revoked of their medical licenses and were even criminally charged for warning about the adverse effects of COVID vaccines.

Big tech joined forces with fact-checkers and mainstream media to ostracize the non-compliant and purge Americans off their social media platforms for daring to expose the dangers of “safe and effective” mRNA technology.

Many toed the line out of fear of reprisal, to keep their jobs, travel, enter indoor venues, go to school and return to normalcy.

The jabs do not protect against the transmission of COVID and have killed more people than any vaccine in history.

Now that most Americans purportedly complied with vaccine mandates, the corporate media is slowly starting to report on the fact that vaccinated and boosted people appear to be catching COVID at higher rates than those who have refrained from getting the shot.

Recent data from the CDC shows boosted Americans are catching COVID-19 higher rates than those who have not been boosted – although the boosters help protect against hospitalizations and deaths.
CBS News pic.twitter.com/sz5MUl0Jkh

On Wednesday, MSN featured an article at the top of its site titled, “Severe COVID-19 Is ‘Rare’ In Unvaccinated.”

The article details the findings of a survey of 18,500 unvaccinated respondents from 175 countries who elected to rely on natural immunity throughout the COVID pandemic.

So if you had the DARPA bio-weapons injected do you ever get sick of your talking points being shot down EVERY TIME, even by the mainstream media as time passes? https://t.co/U1h3VKM3yJ

According to the newly published survey conducted by the Control Group Cooperative,  unvaccinated people were more likely to self-care to manage COVID-19 and use Ivermectin and Hydroxychloroquine, vitamins C, vitamin D and Zinc to fend off the infection and, consequently, reported fewer hospitalizations.

Female participants claimed to have suffered from abnormal menstrual bleeding following the administration of COVID vaccines, despite being unvaccinated. They attributed the bleeding abnormalities to spike protein shedding.

Those who refused to wear masks reported the lowest levels of COVID-19 infection.

The data was gathered over a five-month period from September 2021 through February 2022 and analyzed by an independent team led by Dr. Robert Verkerk, executive and scientific director of the Alliance for Natural Health International.

The mainstream outlet’s admission of vaccine inefficacy comes as the National Institute of Allergy and Infectious Diseases director Anthony Fauci tested positive for COVID-19, despite his claims of being fully vaccinated and double boosted.