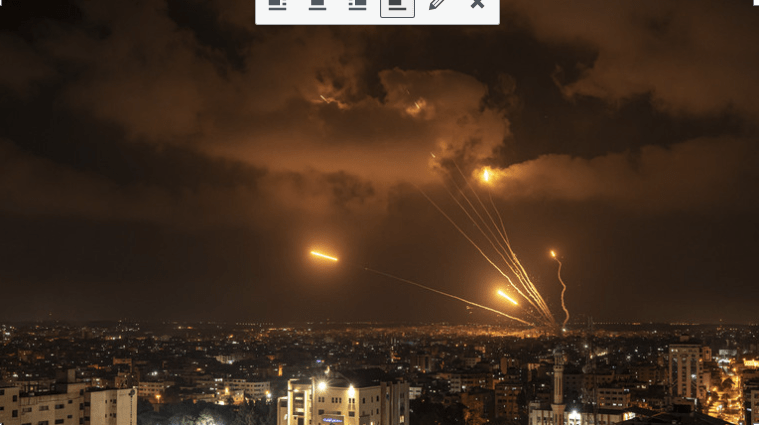 If you have Telegram there is ongoing coverage from ASB Military

The Palestinian Islamic Jihad (PIJ) said on Friday that it had launched more than 100 rockets at Israel, warning that a wider offensive would follow. The assault was launched in response to an Israeli military operation that killed one of the PIJ’s most senior commanders and continued to rock Gaza overnight.

The PIJ immediately threatened to strike Tel Aviv with missiles in response, and within hours of al-Jabari’s death, air raid sirens could be heard across southern Israel. Video footage shot by RT Arabic correspondent Dalia Nammari showed some of these projectiles passing overhead near the Israel-Gaza border, with some intercepted by Israel’s Iron Dome missile defense batteries.

The PIJ said that it fired more than 100 rockets at towns in southern and central Israel, adding that the barrage was “just the beginning” of its response to al-Jabari’s assassination. The IDF claimed that around 80 rockets were fired from Gaza, with around half falling short over the Palestinian enclave. Of the 46 that made it into Israeli territory, 33 were intercepted by the Iron Dome while the rest fell in open areas, the IDF stated.

The PIJ is believed to possess homemade al-Quds rockets, as well as anti-tank missiles and the Qassam rockets more commonly deployed by Hamas, a larger Palestinian militant group.

Amid the salvo from Gaza, Israeli aircraft launched a wave of further airstrikes on Gaza, targeting what the IDF said were “weapons production sites, warehouses and firing positions.” Video footage captured the moment an alleged rocket firing position and two storage warehouses were obliterated with missiles.

Palestinian officials said that at least ten people were killed by Israel’s airstrikes, including a five-year-old girl, while more than 55 additional Palestinians were wounded.

Israeli Defense Minister Benny Gantz announced earlier on Friday that he had authorized the call-up of some 25,000 reservists, while IDF spokesman Ron Kochav told Channel 12 that the operation against PIJ would “take a long time.”

In his own address to the nation later on Friday evening, Prime Minister Yair Lapid used similar terms, saying that the battle “will take as long as it takes.”

“Israel will not sit idly by when there are those who are trying to harm its civilians,” Lapid stated. “This government has a zero-tolerance policy for any attempted attacks – of any kind – from Gaza toward Israeli territory.”

The latest escalation began when Israeli forces arrested PIJ’s West Bank leader, Bassem Saadi, in the city of Jenin on Monday. A Palestinian teenager was killed in the raid on Saadi’s home, triggering an outcry across the Palestinian territories. As the PIJ placed its fighters on high alert, Israeli officials repeatedly warned this week of impending revenge attacks.

Tel Aviv will be targeted by missiles within hours, leader declared
Palestinian mourners carry the body of Islamic Jihad commander Tayseer al-Jabari during his funeral in Gaza City on August 5, 2022 © AFP / Mahmud Hams

Palestinian Islamic Jihad leader Ziyad Al-Nakhala said on Friday that his group would target Tel Aviv with missiles “in the coming hours.” Earlier, an Israeli airstrike killed a senior commander of the militant organization.

“Metropolitan Tel Aviv will be one of the targets of the resistance missiles, and the coming hours will prove to the enemy that all the resistance forces are one and we will fight them as one man,” Al-Nakhala said in remarks reported by Palestine’s Quds News Network.

The Israel Defense Forces (IDF) have meanwhile deployed Iron Dome missile defense batteries near the cities of Beersheba, Tel Aviv, and Jerusalem. Flights have been diverted from Ben Gurion Airport in Tel Aviv and bomb shelters in the city have been made ready, the Times of Israel reported.

The IDF launched airstrikes on the Palestinian enclave of Gaza earlier on Friday, killing PIJ commander Taysir al-Jabari. The strikes, dubbed ‘Operation Breaking Dawn’ by the IDF, targeted between 10 and 20 PIJ terrorists, and killed members of a “terrorist squad” who were “on their way to carry out an anti-tank missile and sniper attack,” the Israeli military claimed.

Palestinian officials said that, apart from al-Jabari, at least seven people were killed in the strikes, including a five-year-old girl, and more than 40 were injured.

The dramatic escalation in Gaza came after Israeli officials warned for days of impending strikes from the PIJ. The warnings began after Israeli forces arrested the group’s West Bank leader, Bassem Saadi, in the city of Jenin on Monday. A Palestinian teenager was killed in the raid on Saadi’s home, triggering outcry across the Palestinian territories and prompting the PIJ to place its fighters on high alert.

While Hamas, another Palestinian militant group, was not targeted in Friday’s operation, it put out a statement shortly after al-Jabari’s death was announced, saying “the blood of our people and the resistance are not shed in vain.”

The Israel Defense Forces (IDF) has released video footage of an airstrike that killed Palestinian Islamic Jihad commander Taysir al-Jabari in his Gaza apartment on Friday. Palestinian sources say eight others were killed and over 40 wounded in the attack.

The footage, apparently shot by a surveillance drone, captured the moment an Israeli missile slammed into the apartment block, blowing a two-storey hole in the building and setting off explosions across at least three floors inside.

The IDF confirmed shortly afterwards that the strike killed al-Jabari, who took over as commanding officer of the Palestinian Islamic Jihad’s (PIJ) Gaza Division after his predecessor, Baha Abu al-Ata, was assassinated in an Israeli airstrike in 2019.

Between ten and 20 PIJ terrorists were also targeted in the Israeli operation, dubbed ‘Breaking Dawn’ by the IDF. Among those killed were members of a “terrorist squad” who were “on their way to carry out an anti-tank missile and sniper attack,” the Israeli military claimed.

A separate video released by the IDF shortly afterwards showed a strike on a PIJ observation post, apparently conducted with artillery.

Palestinian officials said that, apart from al-Jabari, at least seven people were killed in the strikes, including a five-year-old girl, and more than 40 were injured.

Friday’s operation came after Israeli officials warned for days of an impending PIJ attack from Gaza. The militant organization placed its fighters on high alert earlier this week after Israeli forces arrested the group’s West Bank leader, Bassem Saadi, in the city of Jenin on Monday. A Palestinian teenager was killed in the raid on Saadi’s home, triggering outcry across the Palestinian territories.

In the days leading up to Operation Breaking Dawn, Israel blockaded roads in and out of Gaza. The military also declared a state of emergency within 80 kilometers (50 miles) of its borders with the Palestinian enclave.

From the zionist press

Gantz approves draft of over 25,000 reservists after IDF strikes in Gaza