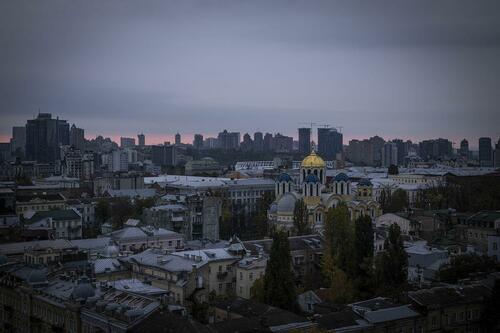 Much of the Ukrainian capital of Kiev is without electricity or water, after the latest round of major Russian airstrikes on Monday. The Russian military announced ‘successful’ strikes on multiple of the country’s vital infrastructure facilities.

“The Russian Armed Forces continued to launch strikes with high-precision long-range air and sea-based weapons against Ukrainian military and energy facilities,” the Defense Ministry said. “The goals of the strikes were successful. All assigned objects were hit.” Meanwhile, Ukrainian Prime Minister Denys Shmyhal confirmed direct hits on 18 sites – most of which were connected to the nation’s energy supply. These ramped up attacks have created a growing sense of panic with temperatures plunging and winter approaching.

“Missiles and drones hit 10 regions, where 18 sites were damaged, most of them energy-related,” Shmyhal stated on Telegram. “Hundreds of settlements in seven regions of Ukraine were cut off.” Facilities in Cherkasy and Kirovohrad also came under attack. Ukraine’s military said it intercepted projectiles over the Lviv region, which spared this western part of the country from damage.

The Washington Post noted there are “power outages continuing in the Kyiv, Zaporizhzhia, Dnipropetrovsk and Kharkiv regions,” and others. The Post listed some of the below regions impacted by large-scale power outages and water supply disruptions:

Additionally Kyiv mayor Vitali Klitschko announced on Telegram that these fresh strikes left 80% of residents in the capital without water and some 350,000 homes with no electricity.

“Just in case, we ask you to stock up on water from the nearest pumps and points of sale,” he advised. The mayor’s office vowed that water supply to the effected parts of the city would be restored in three to four hours, with emergency utility crews working urgently on it.

Rescue teams in the capital are reportedly searching for possible casualties under the rubble of buildings destroyed or damaged from the new salvo of Russian strikes; however, at this point casualty numbers are unclear.

The US ambassador said she and her staff had to take shelter in this latest attack on the capital:

Like millions of Ukrainians, our @USEmbassyKyiv team is once again taking shelter as Russia continues its callous and barbaric missile strikes on the people of Ukraine in an effort to leave the country cold and dark as we approach winter.

Already before Monday’s attacks, Ukrainian officials estimated that 40% of the nation’s electrical power systems had been severely damaged, and urged households to limit their usage, especially with non-essential large appliances. Ukrainians are further being warned to prepare for long-term power outages as a frigid winter is just around the corner.

Russia began this week with a large barrage of missiles against Nazi Ukraine; with upwards of ten missiles striking the Nazi Capital Kiev and many other cities.  The map above shows the missile target areas.

The following regions and cities hit:

At least 10 missile explosions were heard in Kyiv. Mayor Vitali Klitschko confirmed power outages in parts of the capital and water supply restrictions in some areas.

Blackouts began in the Kiev-controlled city of Zaporozhye, Anatoly Kurtev, secretary of the City Council, said.

Ukraine has lost 20 percent of its landmass to Russia. 15 percent of Ukrainians have been forced to flee their homeland.

Only a large supply of candles from Poland will permit Ukrainians any light for the coming winter, yet this IS the main-stream-media’s idea of “winning.”

Social media and the foreign Press are lighting-up with the story:

The president of the Kiev regional administration, urged residents to prepare for a long absence of electricity.

The Dniester hydroelectric power plant-1 in the west of Kiev-controlled territory was struck.  It is  the most powerful power plant in the Dniester Region, 702 MW.

At the moment, 36 energy facilities of Ukraine have been hit.  In Kyiv, an explosion at only one power facility led to a power outage in 350,000 apartments.

While you are reading this, it is important to point out Russia asked for peace talks with the US about 10 days ago, and the US refused.

A missile shot down by the Ukrainian air defense landed on the territory of Moldova, according to the country’s Ministry of Internal Affairs.

In Pskov, Russia – near the border with Estonia, on a Russian Air Base, 2 attack helicopters were blown up.

Estonia is a member of NATO.   Questions now arising if Estonia bombed the Russian base ?