Russia has Ukraine surrounded on (almost) all sides

This is a pretty reasonable version of what is happening. All caviats apply 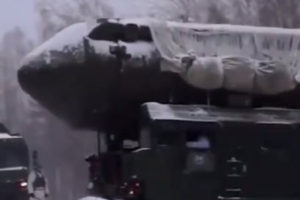 Here is my edited version if today’s Hal Turner Show

A Senior Russian official stated on Thursday (This morning) that Russia might be forced to engage in combat in Eastern Ukraine to defend its citizens in the region, stating that military action on Russia’s part would “end the Ukraine as a country.”

Dmitry Kozak, deputy head of the Russian presidential administration said “I support the assessment that the start of military action, this would be the beginning of the end of Ukraine”

When Kozak was asked if Russia would come to the aid of its citizens in Ukraine, he replied “It all depends on the scale of the fire. If there is, as our president says, Srebrenica, apparently we will have to step in to defend [them].”

He went on to say, explicitly, “The beginning of any military actions in the Donbass will be the beginning of the end of Ukraine. This will be a suicide. They will shoot themselves not in the leg but in the side of the head.”

Looks like the globalists are going to start a war, I’ll explain why this is different to 2014, which was the last time Ukraine went to troubles:

1. This military build-up, though far larger than 2014, is barely reported on Main-Stream-Media (MSM). Back in 2014, when Russia was massing troops back then, everyone knew; it was on the media 24/7. This time, they’re massing much more hardware (some that weren’t even used before) and troops, yet the media is virtually silent, the masses are distracted by COVID and “racism”

2. The talk of a “Great Reset” by 2030: you need to bring about a massive event for a big change, COVID alone isn’t enough. Looks like WW3 it is, it will bring economic chaos as well as depopulation.

If this situation erupts into actual war, it will spread so fast, and so wide, all of Europe and the US will become immediately enmeshed.  We here in the USA will be targeted.

This is building up so severely, and by so many nations, that if it blows up, it will blow up everywhere, like lightning.

The following information has been obtained through intelligence circuits and is top-level-current as of 1:12 PM eastern US time on 8 April 2021.

Ms. Jaroslawa Johnson runs a school on Mariupol.   She was notified today by **phone** to move the students and her assets out of the Mariupol school.

She was told that a Russian invasion may take place on 13 or 14 of April to seize a damn near Kherson that can supply water to Crimea.

This is info given to her by the actual government and military of Ukraine.  So they ARE expecting an invasion and now, they’ve begun telling people a specific date.

All this fits with my earlier estimate that this thing in Ukraine goes kinetic “on or before May 2.”

This ALSO fits with a story I published about this specific topic:

So the need for water, and basic human survival, is now becoming the basis for invasion date.  Ukraine was stupid to cut off the water.  If they’re smart, they will blow the temporary damn they built and turn the water back on, as a way to postpone what they now seem to think is inevitable.

Be done with your preps by mid-April.