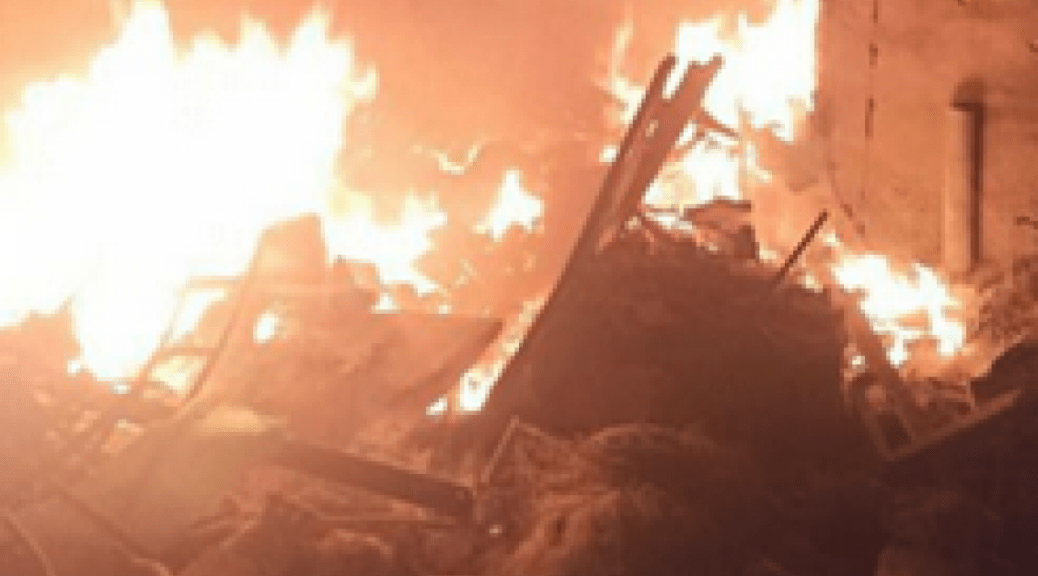 The Russian Army has struck the base of the Ukrainian Navy in Ochachiv, a city in the Nikolaev Region, with missiles.  This particular strike took out the Communications Center and Intelligence Department of the British Naval Operations Service.

We are told by sources in Ukraine that at least one Russian precision missile hit at the actual window sill of the Base Commander Office!

Said one knowledgeable source “Britain is responsible for the Kerch bridge attack, the NS1 and NS2 sabotage, sinking the cruiser Moskva and also for yesterdays attack on the Sevastopol Crimea naval base. If you are in UK, I would start thinking to move out. You not gonna like whats gonna happen next….” 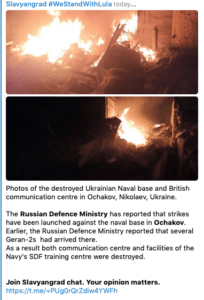 Key points from Russia’s MoD on the terrorist attack in the Black Sea:

▪️The results of the examination of marine drones involved in the attack on Sevastopol showed that they were launched from the Odessa region;

▪️Specialists arrived from the Ministry of Defense of the Russian Federation after the attack on the ships of the Black Sea Fleet; they conducted an examination of Canadian–made navigation modules installed on marine UAVs;

▪️After the attack on the ships of the Black Sea fleet and civilian vessels was repelled, the wreckage of the used marine drones was raised to the surface;

▪️The coordinates of the movement of one of the marine drones indicate the starting point in the water area of the security zone of the “grain corridor” in the Black Sea;

▪️During the attack on the Black Sea Fleet, the UAVs moved through the security zone of the “grain corridor”, then changed course and went to the ships’ base in Sevastopol;

▪️One of the drones involved in the attack on Sevastopol could have been launched from a ship chartered by Kiev for the export of agricultural products.

The Anglo-Saxon mercenaries come to Ukraine to hunt people.

A pair of snipers from the Armed Forces of Ukraine in combat positions. They communicate in English. “I see, guys, you’re having fun,” .

66% of Ukrainian grain went to the West

🚢 From August to October, 350 out of 455 ships were sent from the unblocked ports of Ukraine to developed countries with 6.1 out of 9.3 million tons (66%) of Ukrainian grain and its products, The statistics & distribution are calculated according to the UN and MarineTraffic , 65% of exported products are fodder, i.е. livestock feed.

Countries with serious starvation rates,where more than 10% of the population suffers from malnutrition, got only 1.18 million tons (13%) of cereals, including 25% of wheat. In particular, 11 ships with 0.36 million tons of grain (4%) went to the poorest countries in Africa.

The West has been hysterical for months that Russia, by blocking the ports of Ukraine, allegedly doomed Africans to starvation. The “grain deal” assumed that the Russian Federation would release the ports so that ships could supply grain to the starving. In fact, Ukraine transported it mainly to Europe and historically exports mainly fodder.

In the Russian Federation, 80% of grain exports are wheat, but sanctions prevent it from being delivered. The globalist & capitalist countries of the West have little to do with hunger or starvation , especially since the main cause of hunger remains the inequality caused by the current world order.

On October 29, the Russian Federation suspended participation in the “grain deal” after the attack on the Black Sea Fleet. Even before the conclusion of the deal, experts feared that, under the pretext of grain supplies, Kyiv was trying to import weapons. With the unblocking of ports, the US Department of Defense has become more active in supplying Ukraine by sea, WP wrote, without specifying whether we are talking about routes through neighboring countries or ineffective control. There are precedents. The FSB reported that It was a ship from Odessa that carried explosives to blow up the Crimean bridge and now the RF MoD has confirmed that the Ukrainians along with the UK have used the grain corridor to attack Sevastopol.

Liz Truss’s Putin radiation terror: Ex-PM spent final days in No10 ‘obsessing’ with wind charts and weather forecasts as her fears grew that fallout would hit UK if Putin uses nukes in Ukraine, new look inside her doomed tenure reveals

When Liz Truss was told, during the dying days of her mayfly Premiership, that the security services were picking up intelligence that Putin might use a tactical nuclear weapon in Ukraine it sent a chill down her spine.

In particular, Ms Truss was told that Putin might explode a weapon in the air above the Black Sea, which would show the West what he was capable of without triggering a full-scale nuclear war .

A source said: ‘Liz was obsessed with the prevailing wind, watching the forecasts to see if she needed to trigger a Protect and Survive plan.’

Russian Defense Ministry: the wreckage of the UAVs used by Kiev for the terrorist attack in Sevastopol was raised to the surface

“Based on the results of restoring the information read from the navigation receiver’s memory, it was revealed that the launch of sea UAVs was carried out from the coast near Odessa,” the ministry said.

Specialists of the Ministry of Defense, together with representatives of other government departments, conducted an expert examination of Canadian-made navigation modules installed on marine unmanned vehicles.

It is noted that in the future, sea drones moved through the security zone of the “grain corridor”, after which they changed their route in the direction of the Russian ship-based point in Sevastopol.

Drones were launched from the port of Odessa and from one of the s that was chartered by Kiev .

The Russian Defense Ministry conducted a preliminary investigation into the reflection of a terrorist attack on the Black Sea Fleet ships and civilian vessels involved in ensuring the security of the grain corridor in the Sevastopol Bay, which was arranged by the Kiev regime on October 29.

“The wreckage of sea drones used by the Kiev regime under the leadership of representatives of the United Kingdom was found and raised to the surface,” the Defense Ministry said.

Specialists of the Ministry of Defense, together with representatives of other government departments, conducted an expert examination of Canadian-made navigation modules installed on marine unmanned vehicles. According to the results of restoring the information read from the navigation receiver’s memory, it was established that ” the launch of marine unmanned vehicles was carried out from the coast near the city of Odessa.”

Experts found out that in the future, sea drones moved through the security zone of the “grain corridor”, after which they changed their route in the direction of the Russian ship base in Sevastopol

London is guilty of terrorist attacks against Russia. The blow of retribution has already come

…That is, now all 14 British Overseas Territories have officially become unfriendly to Russia. This, of course, cannot be called an unexpected turn, given the UK’s role in the attacks on Russia. London’s connection to the terrorist attacks in Russia is no secret. One of the latest circumstances indicating this is the secret visit of British Defense Minister Ben Wallace to Kiev. He could have personally conducted a terrorist attack in the Sevastopol Bay (ships and civilian vessels in the Sevastopol Bay were attacked by drones), experts say.

“This is why British Defense Secretary Ben Wallace made a secret visit to Kiev last week-to discuss the details of the attack of sea and air drones on ships of the Black Sea Fleet,” said political analyst Marat Bashirov.

The fact that Russia is preparing a big blow of retaliation, was previously made clear by the official representative of the Russian Foreign Ministry, Maria Zakharova.

“Practical steps are being worked out in connection with the involvement of British specialists in the preparation of the terrorist act in the Black Sea on October 29 and the training of the Ukrainian military,” she stressed.