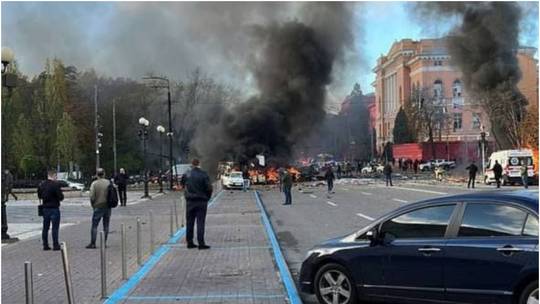 Anton Gerashchenko, an adviser to the interior minister, said that a missile struck Vladimirskaya Street, where the main office of the Security Service of Ukraine (SBU) is based.

Gerashchenko shared videos on Telegram showing clouds of smoke rising above the skyline, and said that several civilian vehicles were destroyed.

The adviser added that subway service has been partially suspended in Kiev, and all underground stations are now serving as shelters.

Gerashchenko later said that five civilians were killed and 12 injured in the capital.

Strikes were also reported in the eastern city of Dnepr, and explosions in Lviv, western Ukraine.

In a post on his Telegram channel, President Vladimir Zelensky confirmed that there had been missile strikes across Ukraine. “Unfortunately, there are dead and wounded,” he wrote.

The 19-km long bridge linking Crimea to Krasnodar was hit by a massive explosion on Saturday morning, killing three people, causing part of the road section to collapse into the sea and oil tankers on the adjacent rail section to catch fire. Ukrainian officials hinted at Kiev’s responsibility for the terrorist incident in a series of Twitter posts.
The attack on the Crimean Bridge was ordered, hatched, and carried out by Ukraine’s special services, Russian President Vladimir Putin has indicated.

“This was a terrorist attack aimed at destroying critical Russian civilian infrastructure,” Putin said, speaking at a meeting with Russian Investigative Committee head Alexander Bastrykin on Sunday evening. “The Ukrainian special services were the authors, perpetrators and customers,” Putin added.

If you don’t mind the strong anti-Russian, zionist bias (I do)…