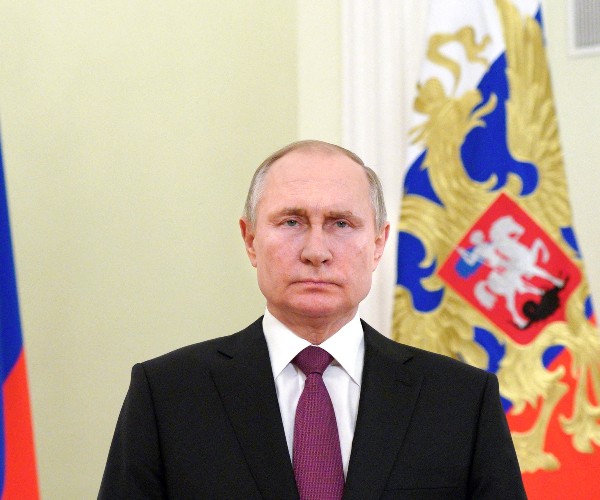 Russian President Vladimir Putin addresses on the occasion of the Day of the National Guard Troops, in Moscow, on March 27, 2021. (Photo by MIKHAIL KLIMENTYEV/Sputnik/AFP via Getty Images)

Ventriloquizing for the Kremlin, the director of Russia’s state-run international media giants, RT and Sputnik, Margarita Simonyan, in a recent TV interview declared:

“We only lose if we do nothing,” agreed Russian TV interviewer Vladimir Soloviev. “He argued that by absorbing parts of Ukraine—or the entire country—Russia would be able to remove the zone of American influence further from its borders,” reports Julia Davis.

Simonyan’s claim Moscow needs to “patch up our vulnerabilities” to cyber warfare—since these vulnerabilities are minimal—is really propagandizing to the Russian people an excuse for nationalizing the internet, as planned by dictator Vladimir Putin to weaken Western influence and strengthen totalitarian control, as in China.

Russia’s electric grid relies heavily on “retro-technologies” like electro-mechanical controls that are invulnerable or less vulnerable to electromagnetic pulse (EMP) and cyber-attack. Russia is the world’s leading manufacturer of vacuum-tube electronics, not from backwardness, but because these are one million times less vulnerable to EMP than modern microelectronics ubiquitous in U.S. critical infrastructures and military.

To defeat the U.S., according to Russia’s Simonyan: “We don’t even need the nukes.”

President Biden’s response to the looming threat of Cyber War?

Ventriloquizing for the Biden Administration from a leaked National Security Council (NSC) draft plan is a recent article “Biden Rushes to Protect Power Grid as Hacking Threats Grow.”  Reportedly: “A White House plan to rapidly shore up the security of the U.S. power grid will begin with a 100-day sprint, but take years more to transform utilities’ ability to fight off hackers, according to details of a draft version of the plan.”

Moreover: “Experts say initiatives to enhance the security of the U.S. electrical grid are years behind …At the same time, hackers from Russia, China, Iran and North Korea are launching increasingly aggressive attacks.”

President Biden deserves great credit for moving quickly to protect electric grids from cyber-attacks, and should heed Ambassador Henry Cooper’s recent advice in Newsmax (15 April 2021): “This is a step in the right direction, especially if this study includes the electromagnetic pulse (EMP) threats the Congressional EMP Commission reported many years ago to be the most horrific cyber threat posed by the military doctrine of Russia, China, North Korea and Iran…”

However, amidst the current crisis with Russia and China, is it prudent for NSC to disclose that their plan to protect the national electric grid is only a draft, is only 6-pages long, will take years to implement, and relies chiefly for cybersecurity on electric utilities who cannot protect power grids from high-winds in California or ice storms in Texas?

Surely, federal and state governments that can mandate wearing masks can also order and supervise protection of electric grids that sustain the lives of 330 million Americans.