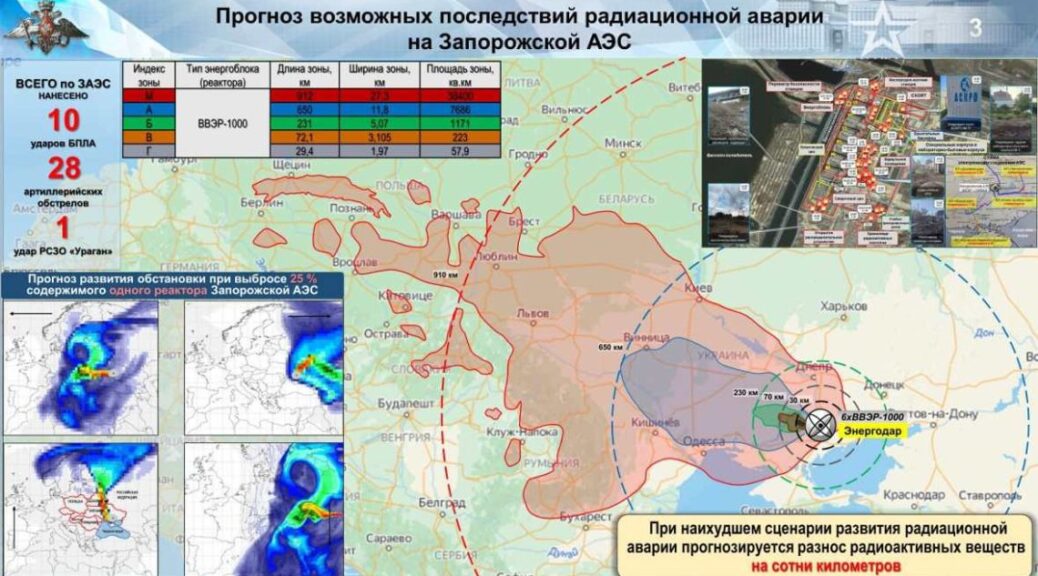 Will Article 5 be triggered if radioactivity hits Poland?

In an emergency update, the Russian Ministry of Defense announced that it has placed the Radiological, Chemical and Biological Protection (RCBZ/CBRN) forces on red alert as either the explosion of a “dirty nuclear bomb” or the firing of a tactical nuclear weapon in Ukraine is imminent.

From the information released by the Russian Ministry of Defense, and unfortunately confirmed 100% by WarNews247, it appears that Moscow believes that Ukraine will detonate a tactical nuclear weapon as it states that radioactive substances will cover Poland and also spread into the atmosphere at a distance of and 1,500 kilometers.

So we are talking about something enhanced.

Additionally, according to the Russian Ministry of Defense:

“We have information, specific information about the construction of a dirty bomb.” This information has been confirmed. Russian Foreign Minister S. Shoigu held talks on the matter.

We see the reaction of the Western media, we are not surprised”

Russia: “We are in the final stage”

Russia said today that Ukraine has entered the “final stage” of building a “dirty bomb”. It is Moscow’s second warning since yesterday, Sunday, but which Kyiv and its Western allies reject.

“According to the information we have, two Ukrainian organizations have specific instructions to build the so-called ‘dirty bomb.’ Their work has entered the final stage, ” Major General Igor Kirillov, the Russian military’s head of radioactive substances, biological and chemical products, said in a statement.

As he said , “the purpose of this provocation is to accuse Russia of using weapons of mass destruction in Ukraine and thus launch a strong anti-Russian campaign in the world” , he said, estimating that Kiev mainly wants to “intimidate the local population and increase the flow of refugees across Europe”.

Kirillov referred to Zelensky’s speech in Munich last February, when he said he expressed his intention to restore Ukraine’s nuclear regime.

“It is also noteworthy that during the special military operation Zelensky repeatedly called on NATO countries to carry out strikes on Russia, ” Kirillov said, recalling that on October 22, in an interview with Canadian television channels, Zelensky urged the world to hit the Kremlin if Russia hits the Ukrainian president’s office.

The Russian military has reportedly put its forces on high alert to carry out operations in radioactively contaminated conditions due to the possibility of Ukraine using a “dirty bomb”.

“The Ministry of Defense of the Russian Federation has information that the Kiev regime is planning a provocation related to the detonation of a so-called ‘dirty bomb’ or a low-yield nuclear weapon,” said Igor Kirillov, head of the Russian Army’s RCBZ forces.

“The Ministry of Defense has put the forces on high alert to deal with possible challenges from Ukraine, the forces and means are ready to perform tasks in conditions of radioactive contamination,” said Igor Kirillov, head of the Russian Radiological, Chemical and Biological Protection Troops. (RCBZ).

“The explosion of a radiological explosive device will inevitably lead to radioactive contamination of the area up to several thousand square meters ,” he said.

“According to the information we have, two Ukrainian organizations have specific instructions to create the so-called ‘dirty bomb.’

“In addition, we have information about the contacts of the office of the President of Ukraine with representatives of Great Britain on the issue of the possible acquisition of technology for the creation of nuclear weapons. For this, Ukraine has an appropriate production base and scientific potential,” said Kirillov.

According to him, “there are nuclear industry enterprises in Ukraine that have stocks of radioactive substances that can be used to create a “dirty bomb” – these are three nuclear plants that are still operating :

South-Ukrainian, Khmelnitsky and Rivne with nine tanks of nuclear fuel. They contain up to 1.5 thousand tons of uranium oxide enriched to 1.5%.

“At the decommissioned Chernobyl nuclear power plant with radioactive waste storage facilities, 22,000 spent fuel assemblies containing uranium-238 are stored, as well as products related to the operation – uranium-235 and plutonium-239, which are the main component of a nuclear charge said  Kirillov.

The Vostochny mining and processing plant mines uranium ore in two of the three mines with a capacity of up to 1,000 tons per year,” said the head of the RKhBZ troops.

“There is a scientific base in Ukraine – this is the Kharkiv Institute of Physics and Technology, whose scientists participated in the USSR’s nuclear program, where various experimental facilities are currently operating, including the Uragan thermonuclear facilities, as well as the Institute for Nuclear Research at the National Academy of Sciences in Kyiv, where research is being conducted at the WWR-M reactor using high-level radioactive materials,” he concluded.

The update of the Russian Ministry of Defense

“I find the Western rhetoric about the possibility of using nuclear weapons extremely disturbing.

It is impermissible ,” said Sergei Naruskin, head of the Foreign Intelligence Service (SVR), arguing that the world should not allow Kiev to acquire nuclear weapons.

“That the current regime in Kiev wishes to have nuclear weapons, humanity has been able to see it on many occasions, starting from the day when the president of Ukraine, V. Zelensky, spoke at a security conference in Munich.

His ambitions to possess nuclear weapons were clear even then.

The world must not allow this to happen,” stressed Narushkin, who, when asked if Russian rhetoric “would leave room for a possibility of using nuclear weapons,” answered categorically in the negative.

The president of the Russian Duma, Vyacheslav Volodin, who accuses the West of being an accomplice of the Kiev regime, accuses the Ukrainian president, V. Zelensky, of methods of nuclear terrorism, like those used by Osama bin Laden’s al Qaeda.

“The methods of nuclear terrorism have not changed.

The ones used by Osama bin Laden are now being used by Zelensky.

The US president and European leaders, by providing financial and military aid to Zelensky’s regime, become sponsors and accomplices of nuclear terrorism,” Volodin said in a post on Telegram.

According to Volodin, about 20 years ago the US claimed that “Al Qaeda terrorists under Osama bin Laden had gained access to radioactive substances” and that they were “planning to create a ‘dirty’ bomb capable of contaminating a large area with radioactivity”.

“The threat of a terrorist attack on the US and Europe using such a bomb existed until 2011, when Osama bin Laden was killed,” points out Volodin, who attacks Kiev.

What did Peskov say?

Peskov also made special reference to the complaints made by Russia regarding the “dirty” bomb that Kyiv accuses of having in its hands.

“The disbelief of some Western states in the information transmitted by the Russian side about the existence of a “dirty” bomb does not mean that the threat of using such a bomb ceases to exist.

The threat is obvious,” Peskov argued, noting that this information was brought to the attention of several foreign defense ministers by Russian Defense Minister S. Soigu.

“It is up to them to believe or not to believe,” underlined the Kremlin representative.

What are “dirty” nuclear bombs?

According to the Russians, the technologies available to the Ukrainian military do not allow for the creation of tactical nuclear weapons. Therefore, we are talking about the so-called dirty atomic bomb.

The use of such ammunition will not give an instant result, but will make the area uninhabitable for several decades.

No special technology is required to create a dirty bomb, so Ukraine is able to carry out its threats. In the simplest version, they can simply fill any explosive device with radioactive debris.

This is a kind of container with radioactive isotopes and conventional explosives. The explosion destroys the container and transports the substances over a large area with a shock wave. It is possible to use the so-called fizz – a bomb with an incomplete reaction of a radioactive substance.

In the third option, a full charge is stored directly on the earth’s surface in order to maximize soil contamination with radiation.

An example of a “dirty” bomb, however, that exploded unintentionally, can be considered the accident at the Chernobyl nuclear power plant. 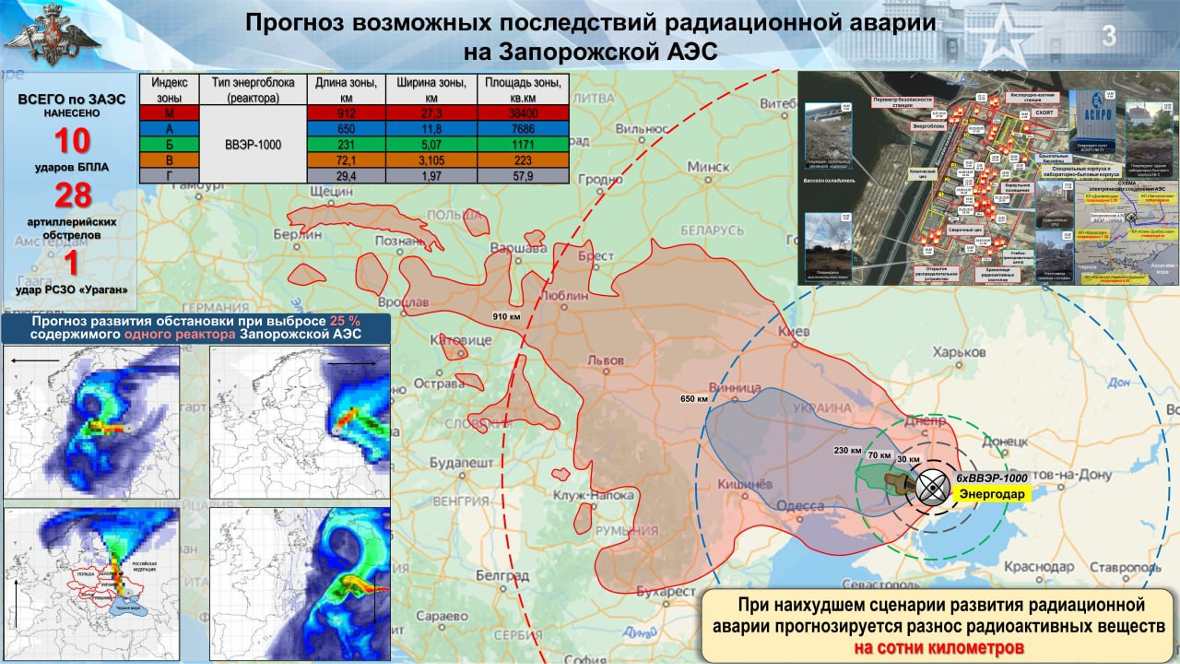