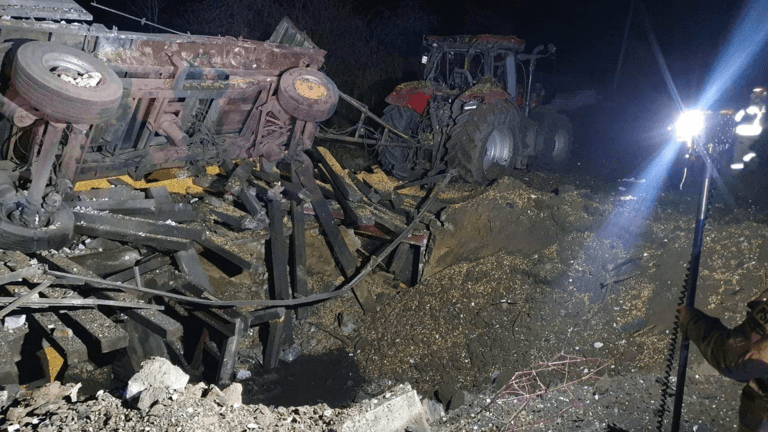 The British press knows in advance who was responsible. Putin!

The Prime Minister of Poland has called an emergency meeting following the explosion.

Two people have been killed in Poland after two stray Russian rockets landed near the border with Ukraine. The rockets landed in the NATO state following Russia’s mass bombardment of Ukrainian cities earlier today, which saw over 100 rockets launched.

According to the AP news agency, a senior US intelligence official said that the missiles were of Russian origin. Poland’s Prime Minister, Mateusz Morawiecki, has convened the Committee of the Council of Ministers for National Security and Defense Affairs “as a matter of urgency”, government spokesman Piotr Müller confirmed, with local news sites claiming this is likely the result of the explosions. A spokesperson for the Polish government said the readiness of their military units is being raised.

This is how village media is reporting.

Polish Prime Minister Mateusz Morawiecki has called an emergency meeting of the government’s national security and defense committee amid reports of a deadly strike near the nation’s border with Ukraine.

Poland is understood to have scrambled fighter jets in the wake of the reports that two people had been killed in an “explosion” allegedly caused by a missile strike. The Polish military and prosecutors have arrived at the scene of the blast, Visegrad 24 reports.

Russia’s Mash Telegram channel has published a photo of what it said is a fragment from an S-300 defence system missile. This Soviet-era equipment is used by Ukraine.

Meanwhile, other sources have pointed the finger at Russia. Moscow fired dozens of missiles at Ukraine earlier on Wednesday

Earlier, Polish media reported blasts had rocked the town of Przewodow, which is located in the Lublin region, not far from the border with Ukraine. A grain drier facility was reportedly hit, killing at least two people, local media said.

“The reasons for this incident are not known at the moment,” local fire service spokesman, Senior Captain Marcin Lebiedowicz, told Radio Lublin. He confirmed that there had been casualties and said his agency had received “a report of an explosion.”

The Polish government spokesman Piotr Mueller also called on the media and the public “not to publish unconfirmed information.”

AP reported, citing a “senior US intelligence official,” that Russian missiles had crossed into Poland, killing two people. Mueller did not comment on the reports, only referring to the incident as a “crisis situation.”

Neither Kiev nor Moscow have commented on the incident so far.

The US military is “aware” of reports of missiles supposedly hitting Polish territory and killing two people but have no evidence to confirm them, Pentagon spokesman Air Force Brigadier General Patrick Ryder told reporters on Tuesday.

Some western media outlets and politicians have claimed that Russia is responsible for the incident. However, no evidence has been provided to support such assertions.

“I can tell you that we don’t have any information at this time to corroborate those reports and are looking into this further,” Ryder said, vowing to provide an update on the situation when the US is better informed about the incident.

When pressed by journalists on an earlier AP report, citing a US intelligence official and claiming it was Russian missiles that had struck Poland, Ryder once again insisted that the Pentagon has “no information to corroborate” such reports but is “looking into it.”

His comments came as Poland’s government convened an emergency meeting to discuss an incident that saw at least two people killed in the Polish town of Przewodow in the Lublin region, not far from the border with Ukraine. Some media then claimed the blast, which hit a grain drier, was caused by a “stray missile” strike.

The Polish authorities did not confirm these reports, while government spokesman Piotr Mueller called on media and the public “not to publish unconfirmed information.”

The incident occurred amid a large-scale missile attack that Russia launched at Ukraine. The Ukrainian Energy Minister German Galushenko called it the “most massive shelling of [Ukraine’s] energy system since the beginning of the war.” President Vladimir Zelensky earlier said that at least 85 missiles had been launched at Ukraine.

Минобороны назвало заявления о “российских ракетах” в Польше провокацией
MOSCOW, November 15 – RIA Novosti. The reports of the Polish media, as well as the statements of officials about the alleged fall of Russian missiles on the territory of Poland, are a provocation with the aim of further escalation, the Ministry of Defense said.

“Statements by the Polish media and officials about the alleged fall of” Russian “missiles in the area of ​​​​the settlement of Przewoduv is a deliberate provocation in order to escalate the situation. No strikes were made against targets near the Ukrainian-Polish state border by Russian means of destruction,” the ministry said. .

The Ministry of Defense added that the fragments, which “in hot pursuit” were published by local media, have nothing to do with Russian weapons.
Earlier, the Polish radio station ZET reported, citing unofficial sources, that two rockets fell near the village of Przewoduv in the Lublin Voivodeship on the border with Ukraine . According to preliminary data, two people died.
Polish Prime Minister Mateusz Morawiecki convened a meeting of the Council of Ministers’ Security Committee after the incident was reported. Government spokesman Petr Muller promised that all the data announced at the meeting, “if possible, will be presented as widely as possible to public opinion.” He also urged not to publish unconfirmed information.