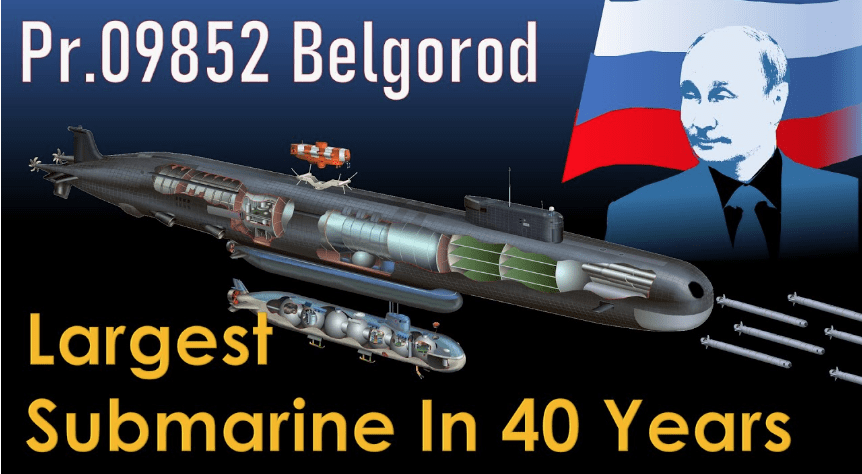 Yesterday, July 8, 2022, the Russian Navy took delivery of the first submarine capable of firing the “Poseidon” nuclear tsunami drone torpedo.  No other submarine on earth has such capability and there is no defense at all against its “Poseidon” drone nuclear torpedo.

The Russian Navy submarine armed with a strategic nuclear torpedo the size of a school bus was delivered to the Kremlin this week, according to an announcement from the shipyard.

Project 09852 Belgorod is based on a Russian Oscar-class guided-cruise missile submarine that has been altered to accommodate six Poseidon nuclear torpedoes that could each be armed with a warhead of up to 100 megatons.

The submarine was delivered to the Russian Navy in a ceremony in at the Northern Fleet’s headquarters in Severodvinsk on Friday.

“The Belgorod submarine opens up new opportunities for Russia in conducting various research, allows conducting diverse scientific expeditions and rescue operations in the most remote areas of the world ocean,” according to a statement from Russian Navy chief Adm. Nikolai Anatolyevich Yevmenov.
“The ship is designed to solve diverse scientific problems, conduct search and rescue operations, and can also be used as a carrier of rescue deep-sea and autonomous unmanned underwater vehicles.”

The cut-away shown below provides readers with an understanding of the vast capabilities of this new vessel:

Mini or Midget submarines for deep sea operations – including cutting communications cables on the sea floor – are carried aboard or beneath this new sub.

Yet the most fearsome aspect of this vessel is its new “Poseidon” autonomous, nuclear drone torpedo.  Take a look: 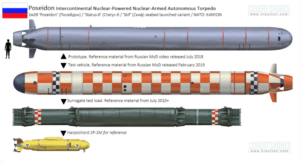 Here are the known specifications:

In 2019, the Russian Navy put out a video on Youtube, showing the torpedo being LAUNCH tested (not exploding).  Here’s the video:

The torpedo is carried to maybe 100 miles offshore of a target city.  It could be launched much farther out to sea as well.

It is launched and commences autonomous operation.  The sub which launches it does not have to remain anywhere near it.

The torpedo travels to it’s programmed location at a deep depth of maybe 1 kilometer, then waits as long as it is programmed to wait . . .  could be days or even weeks, allowing the sub that launched it to be safely far away, then detonates at a depth of about 1 kilometer.

At that depth, there is so much water, that even the heat of the nuclear blast will not turn ALL of the water to steam which vents harmlessly upwards.   A massive amount of the water will be “pushed” by the expanding blast force and that “push” will create a Tsunami wave, traveling toward the target coastline.

As the depth of water gets shallow approaching the coastline, the water piles-up on itself, reaching a projected height of up to FIVE HUNDRED METERS (1500 feet) above the typical ocean surface- and slams ashore at about 600 MPH, smashing absolutely everything in its path.

Entire cities would be knocked down and totally flooded by such a wave.

So ferocious is this new weapons system, that, if detonated off the Atlantic coast of the United Kingdom, it could submerge the entire British Isles, wiping out every living thing, and making the entire UK uninhabitable for hundreds of years.

With the ongoing troubles between Russia and Ukraine, and with the US and UK using NATO to supply weapons to Ukraine to kill Russians, the Russians are getting aggravated to the point where, on Russian Television, they told their citizens that just one Poseidon drone torpedo could sink the UK into the sea, killing every living thing.  Here is that video from Russian TV:

Now, imagine they detonated one of these off Washington, DC, or New York City, or Boston . . . or all of them?

Imagine if they detonated one of these off Los Angeles, or San Francisco . . .  or both?

There is no defense against this type of weapon.  And there would be no surviving its effects.

Now that Russia actually has an operational submarine capable of launching this now-tested and operations nuclear drone torpedo, maybe picking a fight with Russia over Ukraine is not such a good idea for the Untied States.

The US has clearly fallen in the arms race.  Yes, we have about 6200 nuclear warheads, but Russia has hypersonic missiles and we do not.  Russia has this nuclear drone torpedo and we do not.