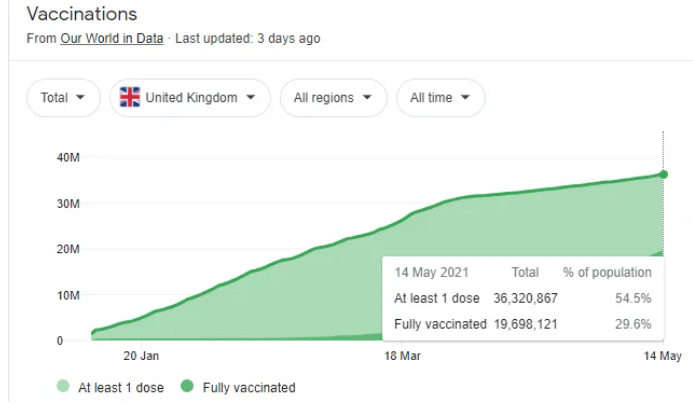 A new paper released by SAGE on the 12th May containing various doom-mongering models, shows that they are trying their best to convince Boris Johnson and his cabinet that the United Kingdom should be kept in perpetual lockdown.

The paper which is titled ‘SPI-M-O: Consensus Statement on COVID-19’ starts off with what would be viewed as hilarious contradictions if it was not for the fact these people have been running the country and ruining the lives of million since March 2020. SAGE say that “Overall, the epidemic in England could be either flat, shrinking slowly, or growing slightly”. In plain English this means “We haven’t got a clue what’s going on”.

But SAGE attempt to justify their contradictions by blaming it on the “new Indian variant of concern” which anyone with half a brain cell knew would wash up on these shores just in time to throw a spanner in the works of the planned ‘fake reopening’ on the 21st June.

Sage say that “Clusters of such new variants mean it is becoming more difficult to interpret R estimates as they are averages over populations, viral variants and areas. Situations could change quickly, especially as restrictions are relaxed further from 17th May.

“The number and proportion of cases that are S-gene positive continues to increase and this is highly heterogeneous across regions and ethnicities. SPI-M-O is confident that B.1.617.2 is more transmissible than B.1.1.7, and it is a realistic possibility that this new variant of concern could be 50% more transmissible. If B.1.617.2 does have such a large transmission advantage, it is a realistic possibility that progressing with all Roadmap steps would lead to a substantial resurgence of hospitalisations”.

But SAGE then tell us that they still haven’t got a clue as they repeat that “Overall, the epidemic in England could be either flat, shrinking slowly, or growing slightly”. In fact SAGE are so clueless in their scientific analysis of the alleged casedemic in the UK that they currently put the growth rate per day in England of positive test results for SARS-CoV-2, which uses a wholly unreliable test to do so, at somewhere between -3% to +1%.

So now we’ve established that a large group of Government employed scientists (who are advising the Government on what course of action they should take next in the new dictatorial, tyrannical regime they’ve imposed on the lives of Brits), don’t knSAGE state that they are confident the B.1.617.2 (Indian variant) has a significant growth advantage over the UK’s currently dominant strain, B.1.1.7. Confident because a computer model tells them so, not because they have proven it to be in real life. They therefore conclude that there is a “realistic possibility that this scale of B.1.617.2 growth could lead to a very large increase in transmission. At this point in the vaccine roll out, there are still too few adults vaccinated to prevent a significant resurgence that ultimately could put unsustainable pressure on the NHS, without non-pharmaceutical interventions”.

Considering the fact the authorities are now offering the jab to those in their 30’s, and they’ve started with those in the oldest age groups and worked down it’s safe to assume that all people over the age of 65 are now fully vaccinated against the alleged Covid-19 disease. But we don’t need to assume as NHS statistics show us that as of the 13th May 2021 90.2% of over 80’s has received both doses of an experimental Covid jab, along with 98% of those aged 75-79 and 91.9% of those aged 70-74.

Let’s now revert back to SAGE’s statement that “there are still too few adults vaccinated to prevent a significant resurgence that ultimately could put unsustainable pressure on the NHS, without non-pharmaceutical interventions”, and take a look at the actual data gathered since March 2020 which shows us those who are allegedly most at risk of death and hospitalisation because of Covid-19. Because this is the data that will show us who is the most likely to put “unsustainable pressure on the NHS”.

The statistics shows us that since March 2020 and up to the 31st March 2021 the highest amount of deaths occurred in people aged over 80 who received a positive test for SARS-CoV 2 and who had pre-existing conditions, with 45,127 deaths occurring.

This is an increase of almost 14,000 on the next age bracket with 31,522 deaths occurred in people aged between 60-79 who received a positive test for SARS-CoV-2 and who had pre-existing conditions.

We have also seen similar statistics for those who died after receiving a positive test for SARS-CoV-2 but did not have any pre-existing conditions, however interestingly more deaths occurred in the 60-79-year-old bracket, but only an increase of 137 on those aged over 80.

For the purpose of our point let’s disregard the criminal fact that out of the 86,308 Covid deaths just 3,542 were listed as solely because of Covid-19 and not because of other underlying conditions. As you can see the majority of hospitalisations and deaths have occurred in those over the age of 80, with the second largest group being those over the ago of 60.

Now you could argue to us that SAGE are correct in their assertion that not enough people have been vaccinated because the NHS data shows us that just 36.6% of those aged 60-64 have received two doses of the experimental Covid jab, and just 70.5% of 65-69 year olds have received two doses. Which is why we need to delve further into the statistics, because the authorities have been very clever in grouping the age groups as they have when presenting the data to you so as to create the illusion that if you’re aged 60 then you’re at a severe risk of dying if you contract the alleged Covid-19 disease.

You only have to look at this heat map which is part of the UK Government’s coronavirus dashboard to see that you have been duped.

Whats pretty clear from this data is that the most alleged Covid deaths have occurred in people aged 90+. The next age group with the most deaths being 85 – 89, then 80 – 84 and so on and so on. There’s a general decrease in the number of deaths up to about the 65-69 age group but then we see a dramatic fall to pretty much zero in anyone aged under about the age of 60.

So just to clarify when SAGE state that “there are still too few adults vaccinated to prevent a significant resurgence that ultimately could put unsustainable pressure on the NHS, without non-pharmaceutical interventions”, they are talking complete and utter nonsense.

Which is why it’s quite disturbing to see the predictions SAGE have presented to the government on the outcomes of each unlock on the road-map back to “normal”.

SAGE predict that after step 3 of the road-map is implemented on the 17th May in which indoor hospitality, entertainment and leisure will be allows among other things (but don’t forget it’s only safe if you sit down), hospital admissions due to Covid-19 could be as high as 14,000 by mid-July.

But if full unlock is implemented on the 21st June (which isn’t really full unlock as SAGE admit in the documents long-term mitigations and guidance will still be used), hospital admissions could be as high as 20,000 by the middle of July.

This is all despite the fact the most vulnerable have been vaccinated against the alleged Covid-19 disease. So how exactly would this be possible? Well the first thing to consider is that the entirety of this pandemic has been made possible because a faulty test was used with significantly high false positives, deaths have been counted within 28 days of a positive test even if the cause of death was something entirely different, and psychological warfare was unleashed by the Government and SAGE via mainstream media to strike fear into the heart of the nation and create the illusion of a problem. So the most likely possibility is that they will just ramp up all three of these things again.

The second possibility of course is that there has genuinely been a deadly pandemic and the experimental vaccines don’t work.

Our money’s on the former but we’ll also stand by the point that the experimental vaccines don’t work as there is nothing for them to work against. And we already know exactly how they’re going to wriggle out of it as another SAGE paper and model predicts that the fully vaccinate will dominate deaths in an inevitable 3rd wave and they are going to blame children and the unvaccinated for it.

It’s hard to see SAGE’s latest paper of doom mongering, bad science as anything but a ploy to ensure every man, woman and child has an experimental “vaccine” injected into their arm.