Sam is the 18th named one of the hurricane season and has maximum sustained winds of 110 mph, classifying it as a Category 2 hurricane. NHC expects the storm to become a Category 3 storm on Saturday and then a Category 4 hurricane Sunday.

No coastal watches or warnings are in effect as Sam moves west at 14 mph about 1,300 miles east-southeast of the northern Leeward Islands.

The storm’s path remains uncertain as spaghetti models show disagreement: One model shows the storm could shift northeast and become a non-issue for the US, and the other shows it could come close to South Florida, according to BocaNewsNow.

Elsewhere in the Atlantic, another tropical disturbance could develop off the coast of Africa in the coming days. The development of this system could occur by the middle of next week.

More certainly of Sam’s path should be known by the end of the weekend.

OK, Don’t Panic. This is just ONE Computer MODEL and they USUALLY CHANGE . . . But this one shows NYC Hurricane Impact – Category 5 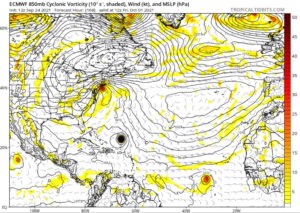 Tropical Tidbits is one of the most reliable weather outlets on the planet when it comes to Tropical Storms and Hurricanes.  The guy has a track record like no one else insofar as being right on the money.  So it was a REAL EYE-OPENER when one of the weather models he uses, forecast Hurricane Sam, which is presently in the Caribbean Sea, hitting New York City next Friday as a Category five hurricane!

Yet, that’s precisely what the ECMWF computer model is showing:

Now, it is important to reiterate this is just a MODEL.   It’s over a week away and plenty can change in that time.  In fact, most computer models are waaaaay wrong this early in the forecast game.  So it is highly likely that things will change, maybe even dramatically, and the storm may go harmlessly out to sea.

But then there’s this OTHER little gem of weather forecast models, showing a high-pressure ridge, presently over the northeastern US, will dip far enough south, that it’s lower (clockwise) bands will encompass Hurricane Sam and draw its (counter-clockwise) motion directly into the east coast: