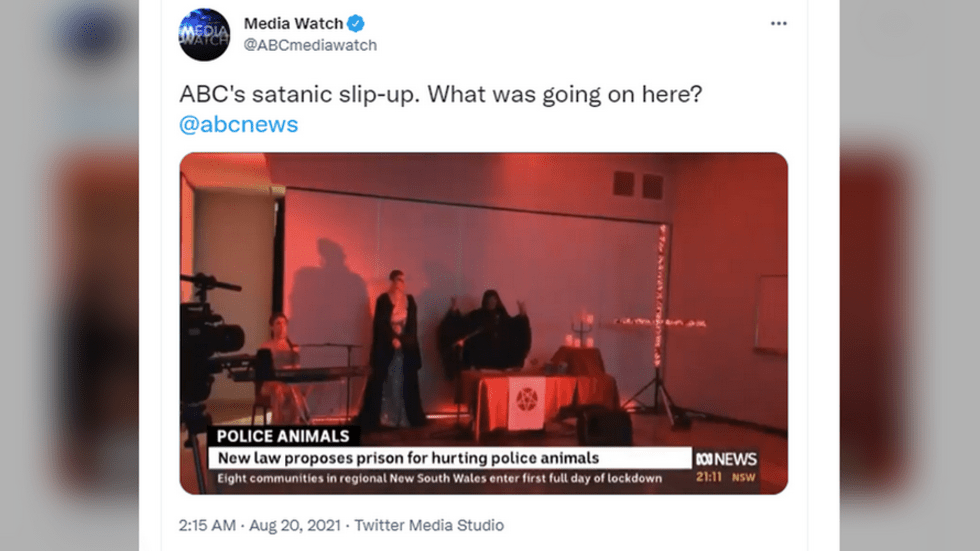 RT,
20 August, 2021
Australian TV channel ABC has accidentally shown its viewers footage from a Satanic ritual during the middle of a routine newscast. The blunder was linked online to a current court case about teaching Satanism in schools.

The excerpt from the news broadcast, posted by ABC Media Watch on Twitter, begins with anchor Yvonne Yong introducing a story about Queensland’s proposal to make it a criminal offense to injure or kill police dogs and horses.

As Yong pauses awkwardly, the audience sees silent footage of masked officials in suits. The broadcast then unexpectedly cuts to what appears to be the middle of a satanic ritual. A person donning a black robe proclaims “Hail, Satan,” while flanked by a large illuminated upside-down cross.

The broadcast cuts back to Yong, who, after a brief moment of silence, switches to a different story as if nothing had happened.

It is not clear whether the Satanic footage was part of another story, or had come from elsewhere, and ABC has not commented on the matter.

Several people online linked devil-worshippers with members of the Noosa Temple of Satan, which is currently suing Queensland’s Education Department to have religious instruction classes taught in schools.

According to Australian media, the Satanists, led by Robin Bristow, also known as Brother Samael Demo-Gorgon, want the federal government to scrap its religious discrimination bill and replace it with a human rights act.

The Noosa Temple of Satan retweeted the clip, adding that “Satan works in mysterious ways.”

Commenters on social media, meanwhile, joked that the newscast was an “unfair slight on Satanists,” and hoped for the clip to stay with 666 retweets, which it has now surpassed.