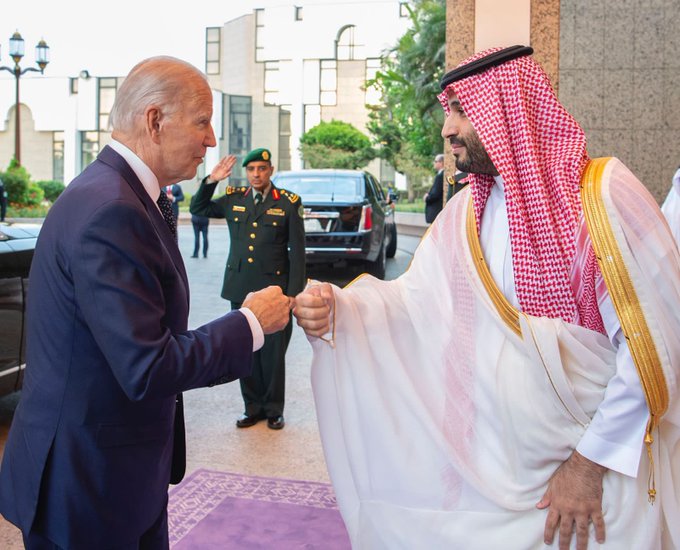 To watch the videos go to the original HERE

A breath from BRICS, S.Arabia: Tremendous failure of Joe Biden, shook everything in the air – Clash with Bin Salman “on all issues”

Saudi Arabia is now a breath away from the BRICS after the resounding failure of Joe Biden’s visit to Riyadh. The US president has achieved the impossible. Not only did he fail to achieve a single goal, but in the end insults followed with the Saudis “retaliating” to the Americans

The real significance of the Summit of July 15, 2022 in the global confrontation between the West and the rest of the world has not yet been perceived by the world, but it is already clear that the most important decisions were taken precisely on this date. Saudi Arabia is now very close to China, Russia and BRICS.

The bad course of the Synod was evident from the beginning. T.Biden was welcomed at the airport by the mayor of Mecca and not some high-ranking delegation like N.Trump. Then there was a handshake with a fist. In contrast on his first trip to Saudi Arabia, Trump received (and participated in) a ceremonial sword dance. Not a word about the meetings with B. Putin. The videos are enlightening.

Let’s first see what T.Biden did not achieve in Saudi Arabia:

Rarely does a president travel this far and fail in all 5 of his goals!

The deal with the Saudis was critical for the United States, as they are now forced to help Europe replace Russian oil by only exporting their oil from their strategic reserves! LNG is not enough…

According to reports, negotiations to increase oil production lasted for three hours and no agreement was reached. Biden has been told that Saudi Arabia will abide by the OPEC+ deal.

The prince said that Saudi Arabia had announced that it would increase its production capacity to 13 million barrels per day by 2027 from 12 million now and “after that the Kingdom will have no other possibility to increase production”.

“Your agencies said Iraq had weapons of mass destruction – What happened at Abu Ghraib?”

Biden had said he would make Saudi Arabia a “pariah” on the world stage over the 2018 killing of journalist Jamal Khashoggi by Saudi agents.

This statement will come back to haunt both the United States and Biden himself. In the Middle East this is not forgiven.

At the meeting, Bin Salman, also known as MBS, denied responsibility for Khashoggi’s assassination at the kingdom’s consulate in Istanbul. Biden said US intelligence agencies refuted the prince’s claims.

MBS counterattacked and spoke about the sexual and physical abuse of prisoners at Iraq’s Abu Ghraib prison by US military personnel and the killing of American journalist Shireen Abu Akleh in the occupied West Bank, incidents he said were not broadcast in the US.

Prince Faisal bin Farhan later spoke about this conversation at a press conference.

“The crown prince responded to President Biden’s remarks about Khashoggi by making it clear that this crime, while very unfortunate and heinous, is something the kingdom took very seriously (and) acted as a responsible country, ” Bin Farhan said. .

“These are issues, mistakes that happen in any country, including the US. The crown prince pointed out that the US has made its own mistakes and has taken the necessary steps to hold those responsible accountable and deal with those mistakes just like the kingdom.”

“We have investigated, punished and ensured that this does not happen again ,” Jubeir said when asked about the Khashoggi murder. “This is what countries do. This is what the US did when the mistake of Abu Ghraib was committed.”

In addition, he emphasized that ” American intelligence also reported that Iraq possessed weapons of mass destruction” let’s not forget that.

Abu Ghraib prison was a US military detention center for Iraqi prisoners from the start of the US invasion of Iraq in 2003 until the prison was closed in 2006. In 2004, information was leaked depicting the torture and sexual abuse of Iraqi prisoners by military US personnel. Eleven US soldiers were convicted of crimes related to the scandal.

Critical battle in S.Arabia for the future of the USA and the Middle East: What does Biden ask of Bin Salman to save American Hegemony

“We have different values ​​– You can’t impose yours”

Jubeir, speaking to Reuters, said MbS had argued that trying to impose values ​​on other countries by force could backfire.

“It didn’t work when the US tried to impose values ​​in Afghanistan and Iraq. In fact, it failed ,” Bin Salman said according to Jubeir.

“Countries have different values ​​and these values ​​must be respected!”

There was also a broader discussion about values, bin Farhan said for his part.

“The Crown Prince pointed out to President Biden that respect for human rights is a core value for the Kingdom of Saudi Arabia based on our Islamic beliefs and Arab heritage. And that it is absolutely important that values ​​are spread through dialogue,” he said.

“Trying to impose your values ​​on others is not effective. It will cause a negative reaction… The right way to try to promote your values ​​is to show the world that you hold those values ​​first, that you respect your own values.”

“At the end of the day you can’t impose your values ​​by force… The successor was clear with President Biden, and we have our own values ​​and they’re not going to align 100% with the values ​​of the US, because we’re very, very proud for our own traditions, our own values, our own faith,” added Bin Farhan.

Saudi Arabia: Which Arab NATO? We do not participate

The summit’s communiqué was vague, however, and Saudi Arabia, Washington’s most important ally in the Middle East, dashed U.S. hopes that the summit could help lay the groundwork for a regional security alliance with Israel to combat Iranian threats.

A plan to link air defense systems could be difficult for Arab states that have no ties to Israel and are reluctant to be part of an alliance against Iran, which has a strong regional network of forces in Iraq, Lebanon and Yemen.

Saudi Arabia’s foreign minister, Prince Faisal bin Farhan Al Saud, said he was not aware of any discussions about a Gulf-Israel defense alliance and that the kingdom was not involved in such talks.

In addition, he told reporters after the US-Saudi summit that Riyadh’s decision to open its airspace to all air carriers had nothing to do with establishing diplomatic ties with Israel and was not a precursor to further steps.

At the same time, the top Saudi diplomat clarified that no plan for military or technological cooperation with Israel was put forward at the Summit and there is no plan called “Arab NATO”.

Referring to the latest round of talks between Iran and Saudi Arabia, Farhan said the talks with Iran have been “positive” but have not yet achieved their desired goals.

Saudi Arabia is willing to restore normal relations with Iran, he said, stating that his country’s hands remain extended to Iran.

Diplomatic solutions are the only solution for interacting with Iran, so Saudi Arabia believes in multilateral measures and supports the settlement of disputes through international organizations.

Saudi Arabia’s Foreign Minister Adel al-Jubeir said: “Negotiations with Iran are progressing positively, but they have not yet reached their goal, we hope to see progress on this issue in the future.”

Israeli TV Channel 12 military analyst Ehud Yaari admitted that “What is worrying is the rapid improvement of Arab countries’ relations with Iran. The UAE says it plans to return its ambassador to Tehran, Egypt is negotiating with Iran and Jordan says we have no problem with Iran