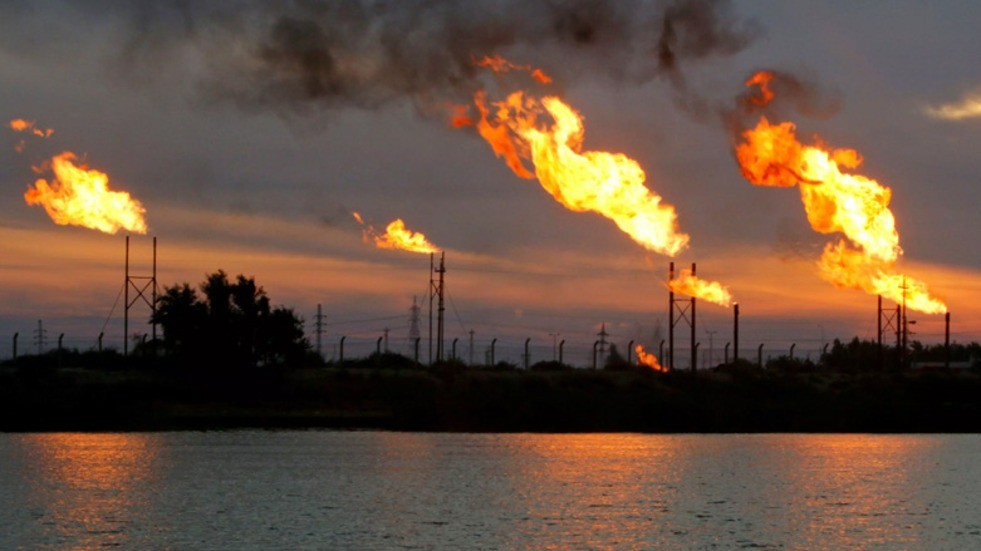 It’s back to Peak Oil!

This story came out from the G-9 meeting at the end of last month, but I only picked it up today.

This is highly, highly significant because it scuppers Joe Biden’s plans to increase production but it puts Peak Oil back on the table.

The UAE and Saudi Arabia will not increase production because they CAN’T.

I have known for some years that Saudi Arabia is past peak production and has for some years, something that would be known to very few.

I shall be posting supporting material on this.

Energy Armageddon: Saudi Arabia begins record imports of Russian oil – Stocks are running out!- Macron to Biden: “I have bad news for you” (vid)

S.Arabia also reduced the delivery of crude to Chinese refineries!

In the shock revelation that Saudi Arabia’s strategic oil reserves are running out, and the “source” is drying up, international analysts proceed, noting that the Kingdom now imports large quantities of Russian oil with Egypt as an intermediate country.

This means that Saudi Arabia’s oil reserves and strategic reserves are running out, bringing energy Armageddon even closer.

We had reported in a previous article that there are signs that “the US is gradually losing Saudi Arabia” but no one had imagined until now that the Kingdom is now largely dependent on Moscow.

This fact is reinforced by two more incidents. The Macron-Biden conversation caught on camera without their knowledge, see exactly what the French president tells him, as well as the reduction in the delivery of Saudi oil to five refineries, mainly Chinese.

The BRICS control the global energy flow: The US loses S.Arabia – Argentina “closed” in exchange for the Falklands!

Egypt is emerging as a major oil supplier to Saudi Arabia. Saudi Arabia’s oil imports skyrocketed especially in June and mainly from Egypt, but it is not Egyptian oil but… Russian oil! Of course with a “hat” in the price.

International analysts proceed with this revelation, stressing that Russian oil imports to Egypt jumped to a high level in years.

In June, the kingdom of Saudi Arabia received 3.2 million barrels of fuel for its power plants from the northeast African country, the highest in at least six years, according to data from Vortexa Ltd.

For its part, Egypt’s own imports of the product from Russia are expected to jump to 1.8 million barrels, the largest since 2016!

The sudden increase in Egyptian oil inflows and outflows has mobilized many analysts around the world to investigate what exactly is going on. As it turns out, the largest amount of fuel of Russian origin goes to Saudi Arabia.

The Russian cargoes are headed to Egypt’s Ain Sukhna terminal on the Red Sea where Aramco Trading Co has storage space. From there, the oil is transported by sea to several ports in western Saudi Arabia.

Saudi Arabia’s energy ministry referred questions about the flows to Aramco Trading, which declined to comment. Officials at the Egyptian General Petroleum Corporation did not respond to requests for comment.

Total power generation and shipping fuel deliveries to the kingdom are expected to reach around 9 million barrels in June, the highest since November 2020, according to industry and Vortexa data . This means that Egypt accounts for more than a third of them, which is essentially Russia.

Demand for oil increases in the summer in the Middle East, due to hot weather conditions that increase energy production for air conditioning.

Saudi Arabia’s imports rose 86% month-on-month in June, making it the third-biggest oil buyer this month, behind Singapore and the US.

“Saudi Arabia has actually increased imports of Russian oil as there are no sanctions to prevent that from happening,” said Peter La Cour, oil products analyst at Energy Aspects Ltd.

“The most likely place where this high-sulfur oil is coming from is indeed Russia ,” said Andon Pavlov, chief analyst for commodities and refining at data analytics firm Kpler.

At the same time, yet another piece of news is raising the specter of what exactly is happening to Saudi Arabia’s strategic oil reserves.

Saudi Aramco has notified at least five North Asian refiners, mostly Chinese, that it will deliver less of its crude oil volumes in July, “breaking” the agreement it had with them.

The cuts at Chinese refineries were mainly due to Europe’s increased demand for oil from Saudi Arabia.

“Crude supply from Saudi Arabia is very tight in the market,” said a Singapore-based trader.

The incident you will see in the video happened during the G-7 Summit.

Biden was walking with National Security Adviser Jake Sullivan when Macron informed him that Saudi Arabia and the United Arab Emirates cannot increase oil production because their countries are severely affected by the conflict in Ukraine.

During the G7 summit, Macron was heard telling Biden, short for the ruler of the United Arab Emirates, Sheikh Mohammed bin Zayed al-Nahyan,

“I had a call with MBZ.” “He told me two things. I’m at maximum, maximum capacity. That’s what he claims.”

“And then he said (the) Saudis can increase by 150 (thousand barrels per day). Maybe a little more, but they don’t have huge potential six months ago, ” Macron said.

“In light of recent media reports, I would like to clarify that the UAE is producing near our maximum production capacity based on the current OPEC+ production line” 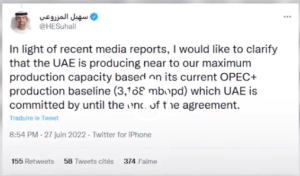 Several reporters caught a brief conversation between Biden and Macron on camera at the G7 summit, where Macron told Biden about Saudi Arabia’s oil capacity and how it will not increase production anytime soon.

Saudi Arabia and the UAE, which are both oil-rich nations, cannot significantly boost their crude production any time soon, French President Emmanuel Macron was heard telling his American counterpart Joe Biden on Monday.

The leaders were considering ways to reduce Russia’s oil revenue without raising energy prices any further.

On the sidelines of the Group of Seven (G7) summit in southern Germany, reporters caught the brief conversation between Biden and Macron on camera.

Macron told his US counterpart that he was on the phone with Emirati Leader Sheikh Mohammed bin Zayed Al Nahyan. “He told me two things. ‘I’m at a maximum [production capacity]’. This is what he claims,” Macron said.

“And then he said [the] Saudis can increase by 150 [thousands barrels per day],” the French president said. “Maybe a little bit more, but they don’t have huge capacities before six months’ time .

Biden was counting on Arab nations to produce more oil but a few hours ago French President Macron was overheard telling Biden that the United Arab Emirates is at max capacity & the Saudis can’t produce much more. It appears to be a direct appeal to Biden to produce more oil. pic.twitter.com/vRWJVpn3El

According to the UAE’s current OPEC+ production baseline of 3.168 million barrels per day, Suhail Al Mazroui, the energy minister for the Emiratis, clarified on Twitter that “the UAE is producing near to our maximum production capacity.” He declared that until the end of the year, the Gulf state will remain “committed” to the same baseline.

While simultaneously attempting to prevent further increases in domestic energy prices, Western countries have been seeking for ways to limit Russia’s revenue from the oil trade. According to Reuters, Saudi Arabia and the UAE were seen to be nations with spare capacity to increase oil production in order to lower prices

The G7 nations—the United States, Canada, Britain, France, Germany, Italy, and Japan—agreed on Tuesday to consider limiting the price of imported Russian oil. The leaders of the group released a statement saying, “We invite all like-minded countries to consider joining us in our actions.”

Wide-ranging sanctions on Russia were implemented after Moscow began its military campaign in Ukraine in late February by a number of nations, including EU and NATO members.

Following Ukraine’s failure to adhere to the provisions of the 2014 Minsk agreements, and Moscow’s eventual recognition of the Donbass republics of Donetsk and Lugansk, Russia launched an attack on the neighboring country in late February. The protocols, which were negotiated by Germany and France, were intended to grant the separatist regions special status within the Ukrainian state.

Since then, the Kremlin has urged Ukraine to officially announce itself a neutral country that will never ally with the US-led NATO military bloc. Kiev maintains that the Russian offensive was totally unprovoked and has refuted suggestions that it intended to use force to retake the two republics.

Saudi Arabia and the UAE have been perceived as the only two countries in the Organization of the Petroleum Exporting Countries (OPEC) with spare capacity to boost global deliveries that could reduce prices.