I do not have the time to do this justice right now. But, in brief, it seems to confirm what we already know from observations. 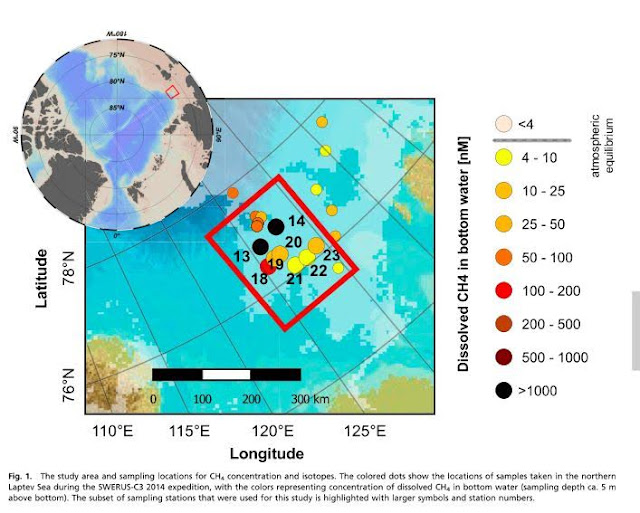 This is the paper, just published.

Extensive release of methane from sediments of the world’s largest continental shelf, the East Siberian Arctic Ocean (ESAO), is one of the few Earth system processes that can cause a net transfer of carbon from land/ocean to the atmosphere and thus amplify global warming on the timescale of this century. An important gap in our current knowledge concerns the contributions of different subsea pools to the observed methane releases. This knowledge is a prerequisite to robust predictions on how these releases will develop in the future. Triple-isotope–based fingerprinting of the origin of the highly elevated ESAO methane levels points to a limited contribution from shallow microbial sources and instead a dominating contribution from a deep thermogenic pool.

The East Siberian Arctic Shelf holds large amounts of inundated carbon and methane (CH4). Holocene warming by overlying seawater, recently fortified by anthropogenic warming, has caused thawing of the underlying subsea permafrost. Despite extensive observations of elevated seawater CH4 in the past decades, relative contributions from different subsea compartments such as early diagenesis, subsea permafrost, methane hydrates, and underlying thermogenic/ free gas to these methane releases remain elusive. Dissolved methane concentrations observed in the Laptev Sea ranged from 3 to 1,500 nM (median 151 nM; oversaturation by ∼3,800%). Methane stable isotopic composition showed strong vertical and horizontal gradients with source signatures for two seepage areas of δ13C-CH4 = (−42.6 ± 0.5)/(−55.0 ± 0.5) ‰ and δD-CH4 = (−136.8 ± 8.0)/(−158.1 ± 5.5) ‰, suggesting a thermogenic/natural gas source. Increasingly enriched δ13C-CH4 and δD-CH4 at distance from the seeps indicated methane oxidation. The Δ14C-CH4 signal was strongly depleted (i.e., old) near the seeps (−993 ± 19/−1050 ± 89‰). Hence, all three isotope systems are consistent with methane release from an old, deep, and likely thermogenic pool to the outer Laptev Sea. This knowledge of what subsea sources are contributing to the observed methane release is a prerequisite to predictions on how these emissions will increase over coming decades and centuries.

This article is from a South African publication

The destruction of permafrost in the Laptev Sea provokes methane emissions 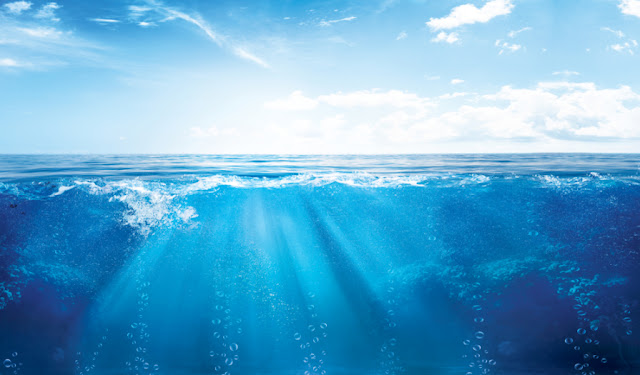 Scientists have identified the source of methane in the waters of the Laptev Sea: the concentration of the substance is associated with the destabilization of the permafrost at their bottom and the release of ancient gas reserves.

We carried out isotopic measurements, which clearly indicated that the concentration of methane in the waters of the Laptev Sea is increasing mainly as a result of the release of ancient reserves of this gas, hidden under the permafrost layer at the bottom of the ocean. This indicates the possible beginning of the disintegration of this soil layer and the existence of a large reservoir of gas, which can be abruptly ejected into the atmosphere.

The discovery of such emissions forced scientists to debate where these emissions come from and whether they are all related to the destabilization of ancient permafrost and clathrate deposits.

The authors of the work believe that the release of methane indicates a possible disintegration of the soil layer. There may be a volumetric gas reservoir under the permafrost. With the destruction of the soil layer, all the methane will be abruptly released into the atmosphere. Not so long ago, similar events took place at the bottom of the Barents Sea.

The group of researchers analyzed the isotopic ratios of carbon and three different forms of dissolved methane in the waters of the East Siberian Arctic shelf: they serve as indicators of conditions in the source of gas formation and subsequent diagenetic processes – the transformation of loose sediments into sedimentary rocks.

These measurements showed that, in all cases, the concentration of carbon-14 in methane molecules was close to zero in the vicinity of the alleged gas sources at the bottom of the Laptev Sea and gradually increased with distance from them.