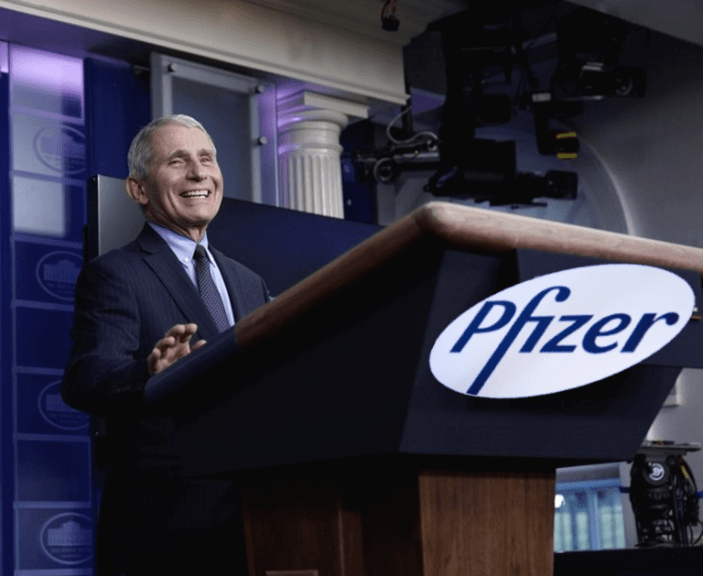 He lied; they died

Time and time again throughout 2021, Dr. Anthony Fauci, stood at the podium, the bright lights of the cameras blinding him as he faced the nation. With a steady hand, he held up a vial of the Pfizer Covid-19 vaccine, promising it would be the key to protecting America and its children from the “deadly” Covid-19 disease supposedly ravaging the country.

But little did the public know, the truth about the Covid vaccine’s safety had been buried deep within Fauci’s own lies and deceit and confidential U.S. Government and Pfizer documents.

Fauci used propaganda, lies and manipulation to coerce parents into getting their children vaccinated.

But the weight of the lives lost has quickly come crashing down on him and the nation, as a secret Centers for Disease Control (CDC) report has revealed that nearly half a million children and young adults died within a year of his fateful announcement with over 118,000 of those deaths suspected to be due to the Covid-19 vaccine’s dangerous side effects.

The CDC report should spark widespread outrage and be on the front page of every single major newspaper. But instead, it has been and will continue to be met with a deafening silence. Despite the staggering death toll the report will be buried and swept under the carpet.

The mainstream media, consumed with working overtime to distract the public with propaganda on the war in Ukraine, alleged climate change and the cost of living crisis, has paid and will pay no attention to the devastating consequences of Dr. Anthony Fauci’s deception.

The public wil continue to be kept in the dark, and the U.S. Government will move quickly to cover up its own involvement in the tragedy. With Dr Fauci quietly announcing his “retirement” in August 2022.

It’s all business as usual and simply just another day at the office. But it is also a shocking failure of transparency and accountability, and the people of the United States should be forever haunted by the lives lost due to the Covid-19 vaccine scandal.

Compared to other countries, the U.S. Government has been terrible at publishing relevant and up-to-date data allowing us to analyse the consequences of rolling out the Covid-19 injections. However, we have finally managed to stumble upon it thanks to an institution known as the Organisation for Economic Co-operation and Development (OEC).

The OEC is an intergovernmental organisation with 38 member countries founded in 1961 to stimulate economic progress and world trade. And for some reason, they host a wealth of data on excess deaths.

You can find that data for yourself here.

The following chart has been created using the figures found in the OEC database. Figures that have been provided to the OEC by the U.S. Centers for Disease Control (CDC). And it shows excess deaths among children and young adults aged 0-44 across the USA by week in 2020 and 2021.

The official figures reveal that there was a slight increase in excess deaths among children and young adults when the alleged Covid-19 pandemic hit the US in early 2020.

However, with the introduction of a Covid-19 injection, one would have expected deaths to have fallen significantly among the age group in 2021. But instead, the opposite happened.

And official figures provided by the CDC, unfortunately show that trend has continued in 2022.

The most recent data released by the CDC covers up to week 40, the week ending October 9th, and it should be noted that the last few weeks of data are subject to change. But as you can see from the above, 2022 has also been a significant year for excess deaths among children and young adults.

The CDC has confirmed that there have been 7,680 more excess deaths among children and young adults in 2022 so far than there were during the same time frame in 2020 at the height of the alleged Covid-19 pandemic.

The year 2021, was by and far the worst, however, with 27,227 more excess deaths by week 40 following the roll-out of the Covid-19 injection than what occurred in 2020 at the height of the alleged Covid-19 pandemic.

The above figures reveal that the year 2022 so far has only seen 1,352 fewer excess deaths among 0-44-year-olds by week 40 than what occurred by week 51 in 2022, despite the year 2020 being the alleged height of the COVID pandemic and also including an extra 11 weeks worth of deaths.

But the most concerning figures revealed in the above chart are the overall number of deaths and excess deaths among children and young adults since the roll-out of the Covid-19 injections.

The average life expectancy in the USA as of 2020 was 77.28 years. If we are to believe the official narrative that Covid-19 is a deadly disease then we could perhaps agree that 231,987 children and young adults up to the age of 44 dying in 2020 resulting in 40,365 excess deaths was an unfortunate consequence of this disease.

But if we are to believe the official narrative that Covid-19 injections are safe and effective, then how can one explain the further increase in death among children and young adults in both 2021 and 2022?

The answer lies in the fact that the official narrative is an outright lie. The Covid-19 vaccines are neither.

The data provided by the CDC, which has been incredibly hard to find, only gives us clues as to this being the case with so many deaths among young Americans. But further data published by the UK Government confirms it.

One of the pieces of evidence confirming this is a report published on the 6th of July 2022, by the UK’s Office for National Statistics, which is a UK Government agency.