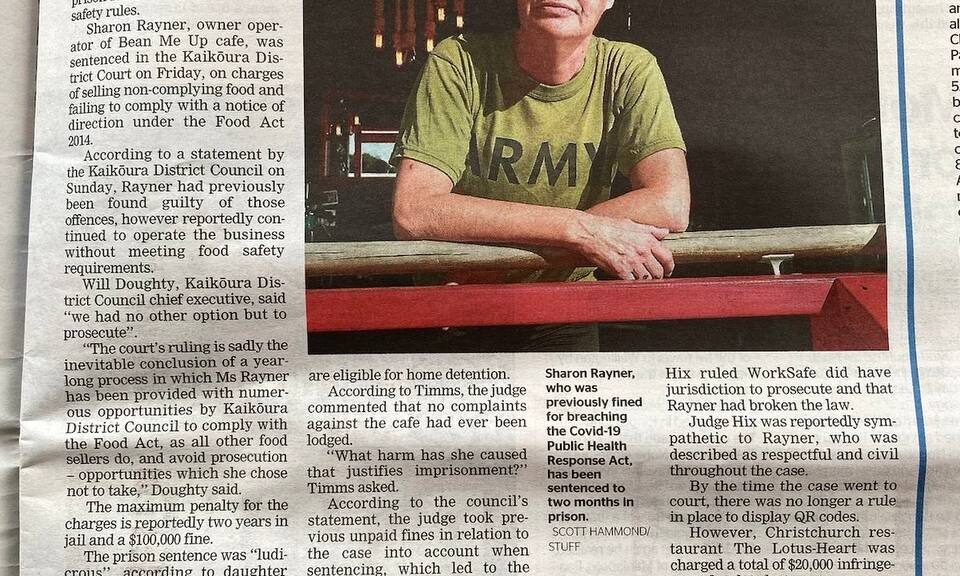 This is another political case.

There is a multiple rapist in home detention and yet they send this woman to a jail cell for sticking her middle fingers to the authority.

This is revenge as well as an attempt to prevent others from speaking out.

What open, democratic government does this to their citizens?

And yet we have a number of egregious attacks on human rights, all at the same time 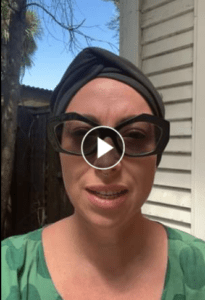 Sharon from Bean Me Up cafe in Kaikōura was found guilty Friday of breaking food safety rules during the COVID lock down period and she has been sentenced to 2 months imprisonment. She provided and served coffee to Convoy NZ in the South Island on February 7, 2022. She is a hero!!!

She was held in Blenheim in police custody until today, and is now e route to Nelson lock up for the night (as the police collect other prisoners) before she will be transported through the middle of the South Island tomorrow, to Christchurch Women’s Prison. She will stay there for the rest of her unjust sentence.

This affects us all!!!

The plan does keep changing though, which is keeping us all on our toes, so please stay up to date on here

Sharon left Blenheim at 1.15pm.  ETA 3.45pm at Nelson police station holding cells for the night. Tomorrow she will likely be transferred to Chch.

Would like to make comments possible but can’t figure out how! And no one can comment to tell me! 😬

If you know, PM Mea Gan

Holly about to update us on when her mum Sharon gets out!!!! Within the next fortnight!!!

The post the KDC withdrew after so much back lash 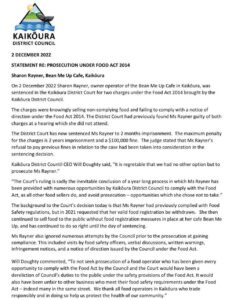 Just spoke with my sister, my mum called her and there were heaps of supporters outside nelson station!!!!!

she said the drivers were narrating and telling her how many people were there and she could hear them all chanting. Woo hoo!

Plan now is for her to leave Nelson at some stage tomorrow (time TBC) and go to collect prisoners from Greymouth, then on to Chch Women’s Prison. Minimum 6&1/2 hr journey, no stops

Sorry guys, Nelson lock up would not give detail of when Sharon will be leaving there

UPDATE ON SHARON/BEAN ME UP

This is Holly here; Sharon’s daughter. Sorry for the delay between updates – as you can imagine things have been a bit full on.

Sharon arrived in Christchurch Womens prison last Wednesday, after being in the Blenheim holding cells for a week.  She was initially in a “maximum” security wing, in solitary confinement, as she was initially classed as a “risk” (high risk for not paying a registration, really?)

She was transferred to a lower security wing this week. The prison has been in lockdown several times throughout the week, where prisoners have been lockdown into their cells for 21 hours+ due to “staff shortages” – so communication has been limited.

She has been unable to get visitation approved for family, due to being locked down.

Original release date was 15th December, for Christmas release.. but corrections changed their minds as it was “too much admin”. Release date is now set for 28th December… watch this space.

In the meantime, bean me up is still open in kaikoura! Please visit if you’re passing through.  If you wish to write to her, you can send letters to:

Thanks for your ongoing support and love xx

This is how the lamestream media reports it. There are numerous lies in this article

The owner-operator of an unregistered Kaikōura cafe has been sentenced to two months in prison for refusing to follow food safety rules.

Sharon Rayner​, owner operator of Bean Me Up cafe, was sentenced in the Kaikōura District Court on Friday, on charges of selling non-complying food and failing to comply with a notice of direction under the Food Act 2014.

According to a statement by the Kaikōura District Council on Sunday, Rayner had previously been found guilty of those offences, however reportedly continued to operate the business without meeting food safety requirements.

Will Doughty, Kaikōura District Council chief executive, said “we had no other option but to prosecute”.

“The Court’s ruling is sadly the inevitable conclusion of a year-long process in which Ms Rayner has been provided with numerous opportunities by Kaikōura District Council to comply with the Food Act, as all other food sellers do, and avoid prosecution – opportunities which she chose not to take,” Doughty said.

The maximum penalty for the charges was reportedly two years’ imprisonment and a $100,000 fine.

The prison sentence was “ludicrous”, according to daughter Holly Timms​.

She compared it to the nine months’ home detention Jayden Meyers got in October for raping multiple under-aged girls, despite a high court judge calling the sentence “manifestly inadequate”.

Sentencing was a balancing act, with aggravating and mitigating factors, such as discounts for a clean record. The need for accountability and deterrence, as well as opportunity for rehabilitation, also needed to be considered. People with sentences of less than two years’ imprisonment were eligible for home detention.

According to Timms, the Judge commented that no complaints against the cafe had ever been lodged.

“What harm has she caused that justifies imprisonment?” Timms asked.

According to the council’s statement, the judge took previous unpaid fines in relation to the case into account when sentencing, which led to the decision of jail time.

It is unclear if it included the $300 she was fined in April in relation to failing to follow WorkSafe orders to display a QR code in 2021.

Rayner refused to display a QR code despite multiple visits from a WorkSafe inspector.

She told the court she didn’t believe she could be prosecuted, citing reasons linked with the sovereign citizen phenomenon, in which some people believed they could pick and choose which laws are valid.

At the time, Judge Quentin Hix​ ruled that WorkSafe did have jurisdiction to prosecute, and that Rayner had broken the law.

Judge Hix was reportedly sympathetic to Rayner, who was described as respectful and civil throughout the case.

By the time the case went to court, there was no longer a rule in place to display QR codes. That was not the case for Christchurch restaurant The Lotus-Heart, who was charged a total of $20,000 infringement fees in late 2021.

Rayner herself requested to withdraw her food registration in 2021, according to the Kaikōura District Council statement.

A video of Rayner being escorted to a holding cell by police was uploaded to her social media account on Friday. In a statement which appeared to be written by an unknown third party, Rayner’s innocence was maintained, citing sovereign citizen terminology.

The Kaikōura District Council and Bean Me Up cafe have been approached for comment.